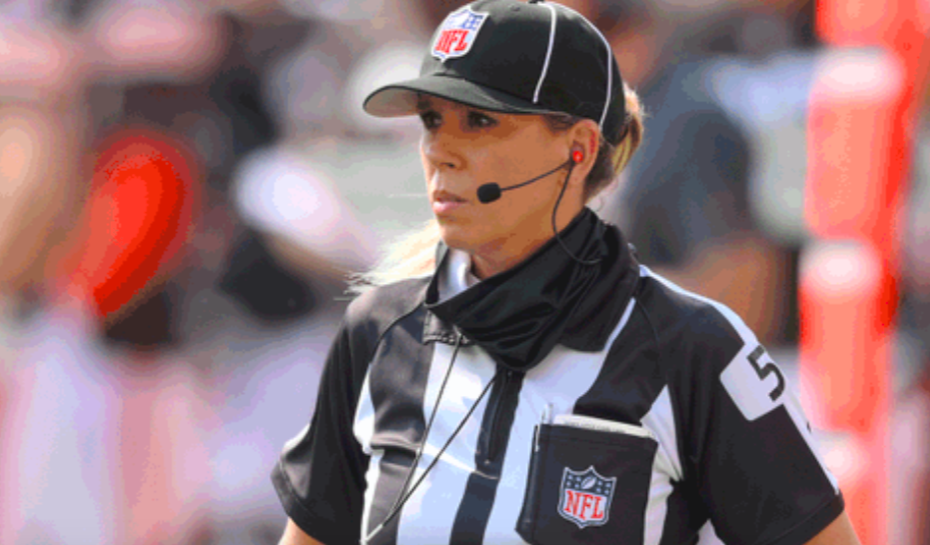 Just another day at the office for Sarah Thomas.

On the sidelines of an NFL game refereeing.

Except this time, this day at the office just so happened to be at the Super Bowl.

“It’s just go-time,” Thomas said to espnW on the Laughter Permitted podcast with Julie Foudy and Lynn Olszowy. “It’s like, adjust the hat, walk out that tunnel. But at the end of the game, the confetti’s coming down, we did a great job, and I just stood there for a moment. I went and found my kids again and got them down on the field. That’s what I’ll forever remember.”

Sarah Thomas was the first female to referee a Super Bowl per NFL.com.

The Super Bowl was an accumulation of all the work she’s put into her craft and topped off a 2020 where Thomas experienced some difficulty during a three-day-period in June, where she was wondering if there would even be a season.

“I would say I was probably in a dark place,” Thomas said on the After Hours with Amy Lawrence podcast. “I don’t usually go there but I was crying. I was mad at the world. I was jut like can everybody just wear a mask can we…do it like a science project like before during and after…I remember telling my parents…I am not in a good place. The worry, the concern, you can’t control anything.”

But, she didn’t let that deter her. The referee found solace in her faith to keep her going.

“My biggest triumph is my faith,” Thomas ‘told Lawrence when asked what her greatest triumph of the last year was’ according to Sports Spectrum. “I grew much stronger in my faith. I will tell you, the Good Lord knew I was gonna be in the Super Bowl, and that’s when He was just saying, ‘Be still. Let Me take the wheel.’”

The road to the Super Bowl hasn’t been an easy one. Thomas has been working hard to get to this point. According to Sports Spectrum: “Her officiating career started when she attended a Gulf Coast Football Officials Association meeting, after her brother informed her that he was going and piqued her interest. Thomas began working high school games and got the attention of former NFL referee and Conference USA coordinator of officials Gerry Austin. In 2007, she became the first woman to officiate a major college football game.”

Thomas was on the Today Show, where she talked about exactly what it takes to be a successful referee.

“It’s just a dedication, it’s surrounding herself with a lot of good people,” Thomas said on the Today Show. “And I just have to commend my mother and father for laying such a wonderful Christian foundation for all us at home. And just never depend on anybody for anything. And hold yourself accountable. Don’t make excuses.”