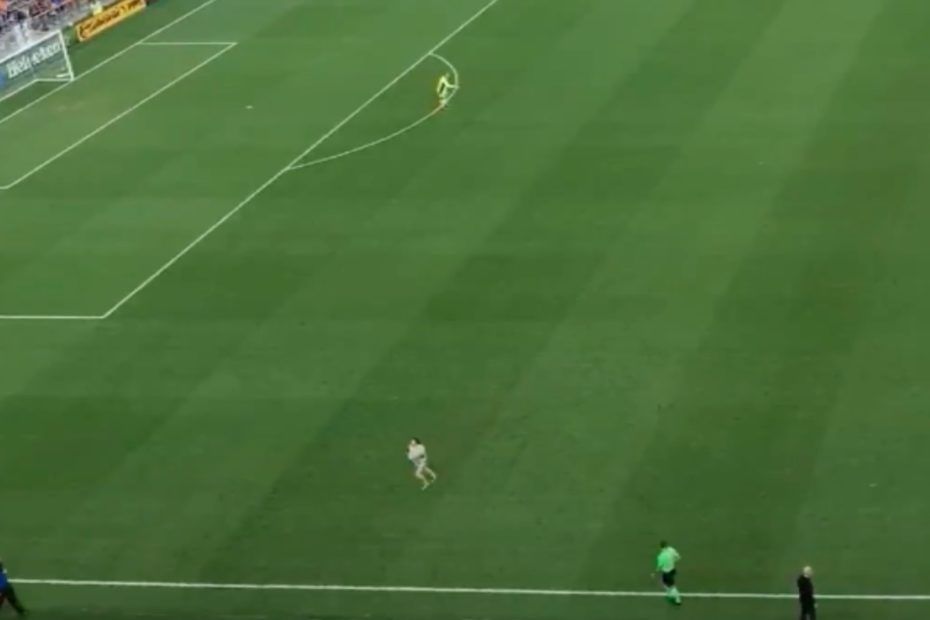 Professional Soccer Game Showcases a 2-Year-Old Tot Being Manhandled by Mom After Running Onto the Field!

While many Midwestern soccer fans showed up to enjoy a pleasant game between FC Cincinnati and Orlando City SC on Saturday, the real star of the show was a 2-year-old boy that darted onto the field and was scooped up by an unhappy mother. Zaydek Carpenter, 2, of Ohio, ran from his seat in the stands of TQL Stadium to the north end of the bright green soccer field. He was headed straight for the middle of the field, but his mom busted out into a sprint and picked him up before he was able to accomplish his mission.

Once Zaydek’s mother, who was later identified as Morgan Tucker, had her eye on her dashing son, she channeled her inner FloJo and captured him before he could cause any real damage. However, in her pursuits, she did end up full-body tackling her child, as if in a past life she was a linebacker. While Morgan looked like she would rather be doing anything else than carrying her toddler child off the field of a professional soccer game, Zaydek was giggling the entire time. The incident was so mesmerizing, Major League Soccer even shared a video of the occurrence on Twitter.

Sam Greene, a photojournalist at The Cincinnati Enquire made sure to respond to MLS wish that the mother and son are having a day. Despite the teams coming to a tie, Greene wrote on Twitter that, “Zaydek and his mom had a great time at the game.”

He even included a photograph of the pair, both sporting smiles that stretched from ear to ear. Even though the match ended with a 1-1 draw, it’s safe to say the fans were rooting for young Zaydek.

Living in the digital age, there was no way Zaydek and his mother would escape the culture of clowning on incidents such as this one. Needless to say, this tot and mom have been the subject of humorous tweets from fans at home.

“Mom deserves a red card for that reckless tackle from behind,” wrote Twitter user, @Dannybo47921132.

“Toddlers only have two speeds: zoom and asleep,” said @hoops4peace in a reply to the humorous video.

Even Sam Greene joked, “A young pitch invader was quickly scooped up by their own personal security detail without incident.”