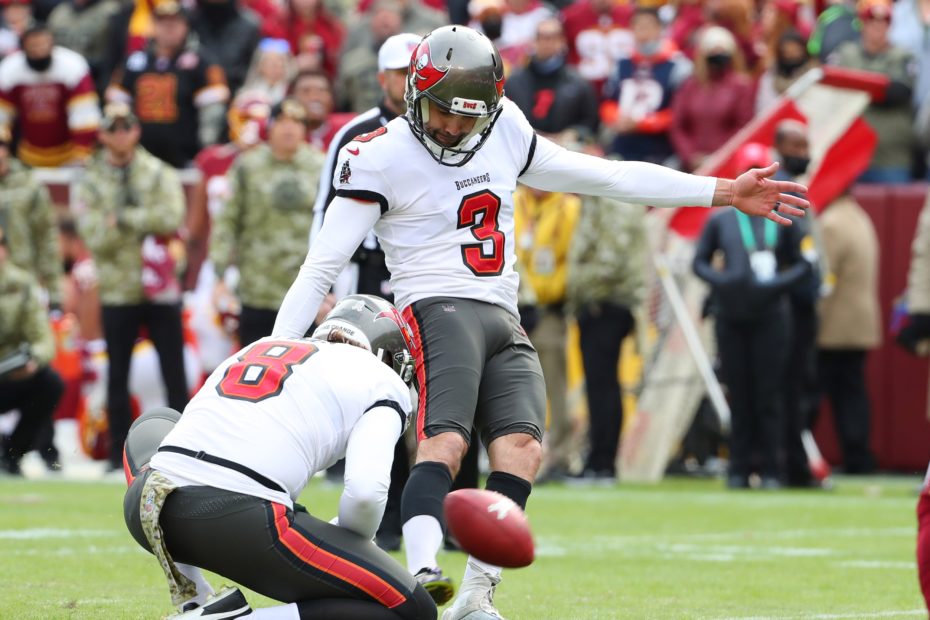 With the NFL still in full swing, we decided to compile a list of the best kickers in the NFL in 2021. Read on to find out who the best kickers are, whose jersey they wear, and their historical field goal percentage.

Justin Tucker, a Baltimore Raven, has a historical field goal percentage of 89.7%. He recently set a franchise record (in September 2021) with a successful 66 yard kick. He recently signed a sponsorship and commercial contract with Royal Farms.

Fun fact about Justin Tucker: he is a bass-baritone and has been contacted by both the Baltimore Symphony Orchestra and New York Opera for his voice. For obvious reasons, he had to decline their offers.

Harrison Butker of the Kansas City Chiefs had a 92.6% for field goals in 2020, and it looking up again this season. His NFL career began in 2017 with Kansas City, and he has been loyal to KC under the jersey number 7 ever since.

Josh Lambo, an NFL veteran, currently plays for the Jacksonville Jaguars and had a 100% FG% last season. Lambo has competed in the NFL since 2015, where he began his NFL career with the San Diego Chargers.

Fun fact about Josh Lambo: Before he was a kicker in the NFL, he was a goalie in professional soccer.

Chris Boswell of the Pittsburg Steelers is currently playing his 7th season in the NFL. He finished last season with a field goal percentage of 82.1%.

Will Lutz’s first season in the NFL was in 2016 when he was drafted by the New Orleans Saints, whom he still kicks for today. His field goal percentage last season was an impressive 82.14%.

It should be noted that due to an injury, the Saints have just sidelined Lutz indefinitely.

Robbie Gould competed for the Chicago Bears from 2005 to 2015. Here, he became the all-time scorer of the franchise, setting a coveted record. Following his time with the Bears, he played one season with the Giants before securing his current position with San Francisco. He finished last season with a respectable 82.6% in field goal performance.

Kai Forbath is a free agent who currently kicks for the Rams. He had a decent kicking percentage of 66.67% last season. Though this is lower than many of the kickers on this list, it is still approximately 5% higher than the average FG%.

Forbath was projected as the second-best kicker in the NFL draft in 2011, he was not selected. Only one kicker was drafted that year, and that was Alex Henery. He did make it to the NFL in 2012 and has played for various teams over the years, including Washington, the Saints, Vikings, Jaguars, Patriots, and now the Rams.

Stephen Gostkowski of the Tennessee Titans held a field goal percentage of 69.23% last season. Before 2020, Myers spent 14 years as the kicker for the New England Patriots. He isn’t retiring yet, but he has sadly been sidelined this 2021 season.

Jason Myers is a Seattle Seahawk and scored a whopping 100% field goal percentage last season. He has been active in the NFL since 2015, having competed for Jacksonville and the New York Jets before his current position with the Seahawks.

Dan Bailey of the Minnesota Vikings joined the NFL in 2011 and spent his first sevens seasons with the Dallas Cowboys before joining the Vikings. He kicked a 68.18% last season.

He was also valedictorian and a state championship golfer in high school.

Greg Zuerlein has been in the NFL since 2012 and had an impressive FG% of 82.9% last year. Commonly referred to as “The Leg” and the “Legatron”, Zuerlein played for St. Louis and LA Rams before his time with the Cowboys.

Daniel Carlson is a kicker for the Las Vegas Raiders. Last season, he kicked a 94.3% for last season and is projected to continue to do so. Additionally, he is currently the tallest kicker in the league.

Ryan Succop of the Tampa Bay Buccaneers had a field goal percentage of 90.3% last season. He has been participating in the NFL since 2009 and played for the Kansas City Chiefs and Tennessee Titans before his time with the Bucs.

Tyler Boss kicked an 87% for the Buffalo Bills last season, which was his second in the NFL. His first season was also with the Buffalo Bills. Boss credits his grandmother for giving him the idea of ever trying to kick for the football team in the first place (he was originally a soccer player).

Matt Gay was drafted into the NFL in 2019 and kicked a respectable 87.5% last season for the LA Rams. He played just one year for Tampa Bay before his career with the Rams.

Like many of the players on this list, Gay was also a soccer player before his football career, having played two seasons for Utah Valley University.

Yuonhoe Koo was drafted by the LA Chargers in 2017, and he played just one year with them before switching to the Falcons, where he remains today. His roots lie in South Korea, where he was born.

Koo kicked a competitive 88.2% last season and is expected to continue to do so (or better) for many seasons to come.

Matt Prater was drafted into the NFL in 2007 and has played for various teams, including the Falcons, Broncos, Lions, and Cardinals (current). Prater held the record for the longest field goal kicked for 8 years until it was broken this year by Justin Tucker. He kicked a 75% last year with the Lions, and just entered his first year with the Cardinals,

Brandon McManus’s NFL career began in 2014 with the Denver Broncos, where he still plays today. He kicked a solid 82.4% last season.

Mason Crosby currently kicks for the Green Bay Packers (where he has remained since his draft) and has a record of 100% for his field goal performance last season. Competitively, this lines him up with the top few kickers in the league.

In his youth, he played football and soccer in Georgetown, Texas, and was drafted all the way back in 2007. While many kickers stay in the game as long as Crosby, few have been able to retain their full athleticism and stellar kicking statistics.

Michael Badgley, also known as the “Money Badger”, kicked a 72.7% last year for the Colts. Before his current position with the Colts, Badgley has competed for the Chargers and Titans since he entered the league in 2018.

Graham Gano currently kicks for the New York Giants, where he has been since 2020. He kicked a jaw-dropping 96.9% last year, and fans are excited to see how his stats will shape up this season.

Before his time with the Giants, Gano played for the Panthers and Washington, where he set a record for the longest franchise field goal: 59 yards.

Cody Parkey currently plays for the Saints. Before the Saints, he spent time with the Eagles, Browns, Dolphins, Bears, and Titans, all since he entered the league in 2014.

Greg Joseph of the Minnesota Vikings hasn’t participated in the last two years but made a comeback this year with a field goal percentage of 84% so far. During his last season in 2018, we saw him kick an 85%. Since joining the league in 2018, Joseph has spent time with the Titans, Vikings, and Browns.

An interesting fact about Greg Joseph is that he was born in Johannesburg, South Africa.

Having just joined the NFL in 2020, Rodrigo Blankenship has served his entire pro-football career so far with the Colts. Blankenship kicked an 86.5% last season and became a fan favorite, with the nickname “Hot Rod.” We project that Blankenship will be around for a long time to come.

We also love his couples pics on Instagram… so wholesome.

Which kicker is your favorite to watch score a few extra points?