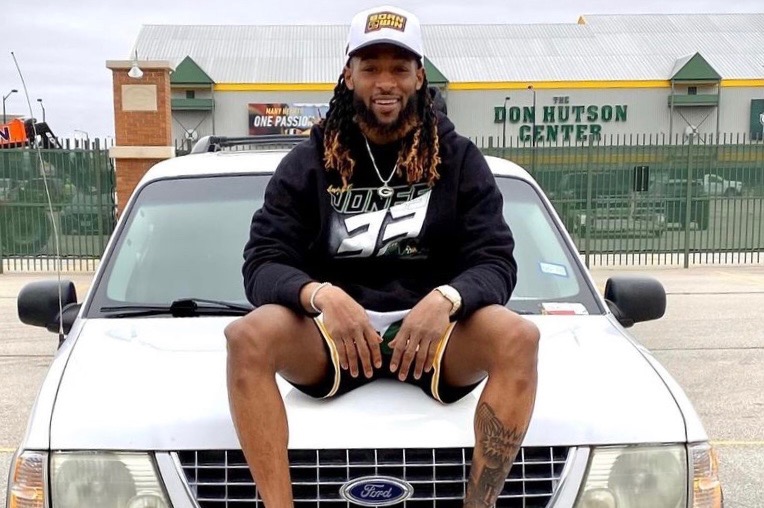 Green Bay Packers running back Aaron Jones had his first game back on Lambeau Field since the tragic death of his father occurred. However, the NFL player had a special idea to keep his father with him both on and off the field: a necklace containing the ashes of Alvin Jones Sr. But, in an unexpected turn of events, the memorable necklace was lost somewhere during the Packers versus Lions game.

The star player dominated throughout the four-touchdown game, resulting in the Packers leading 35-17 over the Detroit Lions.

Jones predicated the football-shaped necklace that contains the ashes of his late father slipped off during the second-quarter touchdown catch. During this week 2 game, this was only one of three receiving touchdowns Jones assisted in, which ultimately allowed Green Bay to claim victory.

Aaron Jones knows his father looks upon him and smiles!

Although rightfully upset, the 26-year-old athlete stated that if it had to be lost anywhere, it should be on his turf. “If there was any place to lose it, that’s where my dad would’ve wanted me to lose it,” the running back commented in reference to the end-zone. According to ESPN, he added, “So I know he’s smiling.”

Upon losing his cherished item, a thorough search was conducted. Thanks to a thoughtful Green Bay Packers trainer, Bryan Engel, the necklace belonging to Jones was found and returned. The player confirmed in an early morning talk show host in Milwaukee, “[He] found it, so we’re perfect. Thank you to him. He was out there until 1:45 [a.m.]. It shows how much they care about us.”

The 23-year-old even took to Twitter to announce the good news. Sharing that his father’s ashes had been found, he wrote, “Found at 1:45 am Thank you to our trainer Bryan ”Flea” Engel I’m forever grateful.”

Jones was very dependent on his dad’s support throughout his career, so not having his father physically there has been challenging. The necklace serves as a reminder of his father’s life and take place of the rituals he used to do with his dad prior to the passing. Jones recalled memories of finding him before games and stated, “I’m used to turning around and seeing my dad in the stands and just smiling to know everything is OK. So when I was seeing them, I was good.”

Alvin Jones Sr. passed away at the age of 56 due to COVID-19 related complications. The NFL star took to Instagram to announce the death of his father and admitted to being fearful of not having his father with him on game days. “Can’t even imagine game days without you by my side haven’t missed a game in 9 years and it scares me to think about it but I know you have the best seat in the stadium and you’re forever engraved in me,” he wrote.

He additionally noted his love for his father and that he will take care of the family, just like his father had done prior. Jones shared the sentiments, “I’m so proud of you I love You Dad I promise I’ll always protect and take care of our Queen.”