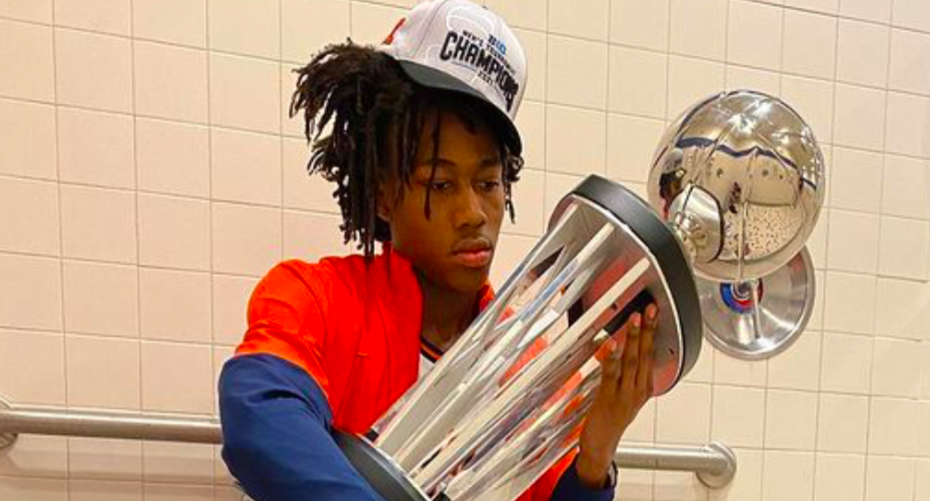 Ayo Dosunmu straight up balled out with the Illinois Fighting Illini this season. The two-time All-Big Ten guard averaged 20.7 points, 6.3 rebounds, and 5.3 assists.

RELATED: Keyontae Johnson Plans To Make Most Of Each Day After Miracle: ‘It Opened My Eyes To See How Grateful I Am To Be Here …God Said My Work Here Ain’t Done’

One of the best Big Ten college basketball players this season, he helped his team win the Big Ten Championship and was awarded the Big 10 Tournament Jim and Kitty Delany Most Outstanding Player per Big Ten Men’s Hoops.

In the Big Ten tournament, he had 23 points and five rebounds, and six assists against Rutgers, 18 points, seven rebounds, and nine dimes against Iowa, and in the final against Ohio State, he put up 16 points, nine rebounds, and four assists.

That championship game took an overtime for Dosunmu and Illinois to claim the Big Ten title.

The “#MaskedMamba” pays respect to the “Black Mamba” by posting pictures posing with the trophy in a similar way Kobe Bryant was holding the NBA Finals trophy:

Obviously, Bryant knew a thing or two about winning MVP’s and championships. The NBA Hall of Fame guard was NBA MVP, two-time Finals MVP, four-time All-Star MVP, and five-time NBA champion. But, more importantly, he was a husband, a father and family man.

Though that’s all in the NBA, Dosunmu pays his respects to one of the best basketball players to ever play the game after winning incredible accomplishments at the collegiate level.

A brief snapshot at what was a great season for Dosunmu (per the Fighting Illini site):

The Wooden Award he’s on the ballot for is awarded to the “most outstanding college basketball player in the United States” per the award’s site. Of course, the award is named after one of the greatest basketball coaches of all time:

Dosunmu rocks a face mask on the court as he missed “three games with a concussion and facial injuries…(and) returned March 6 wearing a protective mask he chose because it makes him look a little like a superhero” according to the News-Herald.

The guard sure is playing like a superhero. But, like any good superhero who has that “mamba mentality”, he’s not done yet.

“‘Job not finished’…#MaskedMamba,” Dosunmu said in the post while also posting a picture of the press conference where Bryant said this: