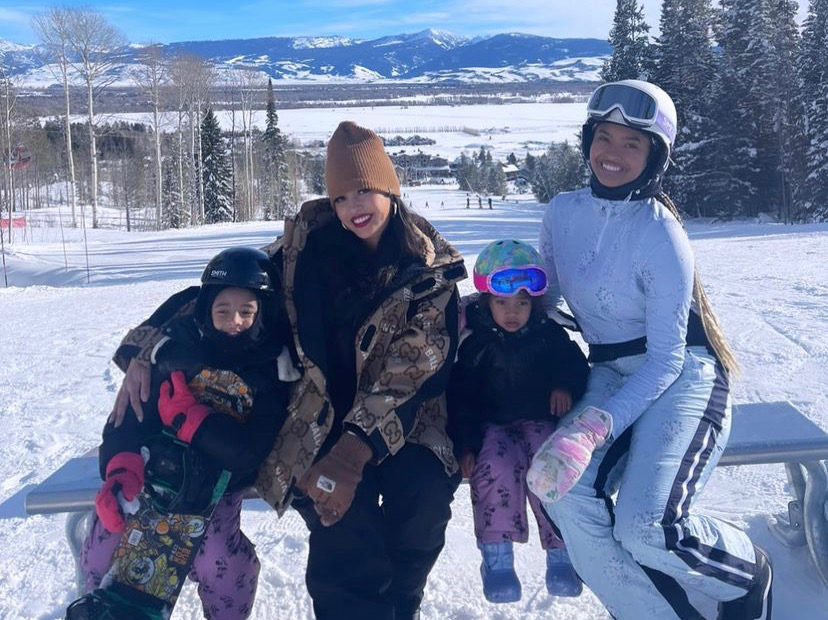 Bianka Bryant is Learning to Snowboard and It’s Adorable

Vanessa Bryant, window to NBA legend Kobe Bryant, embarked on a winter journey to Wyoming with her three daughters. Bundling up for the cold weather, the 39-year-old mother shared that Bianka is learning how to snowboard.

Sporting some very appropriate fashion for the cold (snow pants, a large winter coat, and a frizzy blue tutu), the 5-year-old was documented making a slow descend down the snow-covered mountainside of Jackson Hole, Wyoming.

Vanessa followed closely behind her and would hold her hand if necessary, but the video shared to social media depicted a very determined Bianka getting the hang of the sport.

“Go B.B!” Vanessa Bryant wrote in the caption of the Instagram post that showed her daughter’s snowboarding endeavors. She also noted that her second-oldest, Gianna, learned to snowboard in that very same location. She wrote, “This is where Gigi and Nani learned to snowboard.”

How is the youngest Bryant daughter handling the weather?

Bianka’s snowboarding experience was not the only wholesome event documented during the Bryant’s winter trip. Vanessa even documented her youngest, Capri, acclimating to the cold weather. Given she is California-born and raised, being thrust into below-freezing temperatures is definitely an adjustment.

However, it was clear that the eldest Bryant daughter was more comfortable embracing the Wyoming winter. The mother made sure to let her followers know that 18-year-old Natalia Bryant can handle the cold. While dressed up in a classy black and white snow outfit, a video on her mother’s Instagram showcases her gliding right through the fresh powder.

Alongside relaying that all the Bryant girls were having a fun and fulfilling excursion working through the snow, Mommy Vanessa made sure to show the relaxation tidbits as well. Little Capri was seen swimming through a steaming jacuzzi after a long day of snowfall. Needless to say, it seems like their winter break outing was a complete success.

In Vanessa’s final picture from Jackson Hole, Wyoming, she posed with her daughter’s and penned a heartfelt caption that read, “I’ll love you for now, forever and for always.”