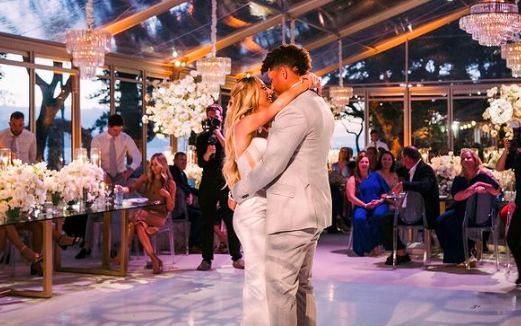 Brittany Matthews Reveals the TRUTH Behind Her Incredible 2022 Destination Wedding

Brittany Matthews recently opened up about her and NFL quarterback Patrick Mahomes’ decision to have a destination wedding.

Taking to Instagram, the 26-year-old personal trainer requested questions from her followers. Unsurprisingly, many fans wanted to know about her wedding, which occurred last month in Hawaii. Matthews explained that the decision to have a tropical destination wedding was based on a desire for seclusion and the fact that the couple genuinely enjoy spending vacation time in Maui.

Explaining that Maui was their first vacation spot as a couple, the newly wedded wife shared “we have just loved it ever since! The weather and views are just perfection there! I wanted somewhere where people couldn’t just pull up to lol,” she continued.

Furthermore, the fitness enthusiast revealed what flavor cake the couple decided on. Instead of just choosing one flavor, there were three amazing flavors for guests to pick from. “Carrot cake, red velvet & his cake was cookies & cream,” she answered after an anonymous Instagram user asked about cake flavors.

Matthews and Mahomes have been patiently awaiting their big day for quite some time now- they’ve been together since high school and announced their engagement in 2020 after the Kansas City Chiefs garnered the Super Bowl LIV victory. However, when the couple announced that they were expecting a child, they made the decision to postpone wedding plans until after their daughter was born.

The wedding, which happened in March, was a beautiful beachside ceremony that was only seen by the longtime couple’s closest family and friends. In addition, they gave their one-year-old daughter Sterling Skye the most adorable job at the wedding: flower girl.

“Having your daughter [a part] of your wedding just hits different,” Matthews said after the wedding.

And, the plan to have their daughter have a major role in the wedding has been a long time coming. Since the first talk of Sterling being a flower girl came about in July, it is clear that the couple has been planning to incorporate their daughter into the wedding for months.

“She’ll be, I think, a little over a year old by the time the wedding happens … so hopefully she’ll be able to be the flower girl and be able to be walking by then and do all that cool stuff,” Mahomes shared in July. “She’ll be a part of the wedding no matter what.”