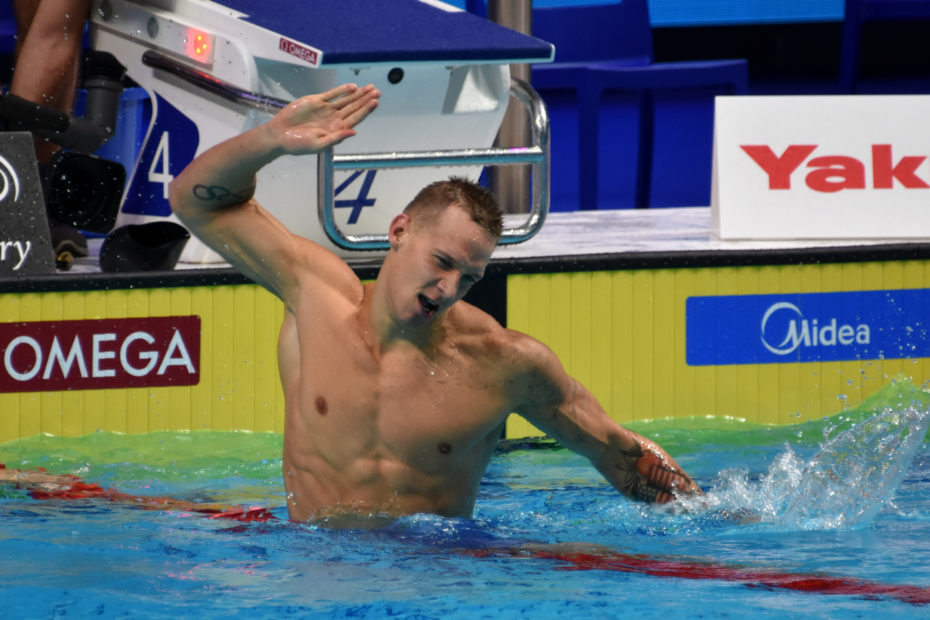 Caeleb Dressel, 24, Had an Amazing Race and Won Gold – His Wife Cried Tears of Joy!

American swimmer, Caeleb Dressel, put on an amazing aquatic performance in the men’s 100m freestyle race during the 2020 Tokyo Games. While he was undoubtedly excited about his gold medal win, there was someone who surpassed his enthusiasm by a landslide. If possibly to win gold for excitement, Dressel’s wife Meghan most certainly would have her own medal.

The Dressel family gets emotional!

From the comfort of a watch party in Florida, Meghan, her father-in-law, and mother-in-law watched Dressel swim the race with an incredible time of 47.02 seconds. Meghan, who was unable to contain her excitement, began screaming and jumping for joy before she eventually broke out into tears.

“We love you so much. We’re so proud of you,” said Meghan to her husband in a video chat after he had won the race. She was still visibly shaken up, yet her husband shared her emotions. He too could be seen with tears in his eyes.

“I cry a lot,” the 24-year-old swimmer said to reporters later that day. According to People, he added, “And so I can’t be calling them [my family] every night, you know, exerting that energy, but it’s got to be put into my swimming.”

He also included the sentiments that in order to be successful, he has to manage his emotions.

If it is true that he reflects his wife and family’s emotions, Dressel has been mirroring Meghan’s feelings since they were in high school. After meeting at a young age, the couple trained together in their high school’s swim program. Eventually, Dressel popped the question in 2019 and the rest was history.

Kaitlyn, who is the big sister of Caeleb, is in full support of their relationship as well. She has even gone as far as calling Meghan a best friend. On Instagram, Kaitlyn stated, “Hands down – this was my FAVORITE surprise proposal TO DATE. My little brother & one of my best friends get to spend the rest of their lives together!!!”

Needless to say, his performance was legendary. Although the swimmer has won gold medals in the past with his team backing him up, this was Dressel’s first time placing first in an individual competition. He was not shy to admit that it was nerve-wracking, either.

“I knew that weight was on my shoulders. I’d won [Olympic] relay medals but never individual, so it was really special,” the Olympian commented. “I didn’t want to admit it but now that I did it, I can. “It’s a lot different. You can’t rely on anyone else. It’s just you and the water, there’s no one there to bail you out. It’s tough.”