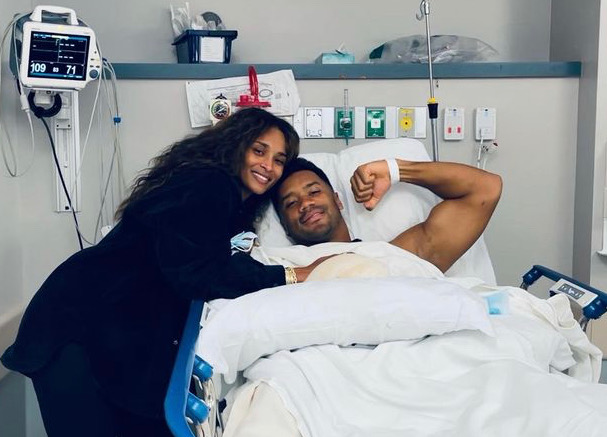 Thirty-two-year-old Seattle Seahawks quarterback, Russell Wilson, recently suffered an injury to his middle finger during a game against the Los Angeles Rams. The injury was so severe it called for surgery, but his wife Ciara was there to support him through the entire process.

“You’re the toughest Man I know. Always dedicated and committed to do whatever it takes,” the professional singer wrote on Instagram, referencing her husband and his injury. She went on to give her love to Wilson, as well as show gratitude for the doctor that operated on him. Ciara stated, “I love you so much my Sweet King. Thank you, Dr. Shin and team for taking care of my baby.”

She also added, “#3 #RareBreed” to the caption.

Dr. Steven Shin is a hand specialist who belongs to the Cedars-Sinai Kerlan Jobe Surgery Center in Los Angeles, California. According to a statement put out by the Seahawks following the big game, “Russell Wilson injured his right middle finger during last night’s game versus the Rams. He sustained two injuries to the finger: an extensor tendon rupture (mallet finger) and a comminuted fracture-dislocation of the proximal interphalangeal joint.”

The statement also included, “He had successful surgery today in Los Angeles by hand specialist Dr. Steven Shin at the Cedars-Sinai Kerlan Jobe Surgery Center to repair both injuries.”

“He will start therapy this weekend and it is highly anticipated that he will return to play later this season,” the NFL team concluded in their announcement. In addition, Wilson’s doctor put out his own personal statement that assessed the likelihood of the quarterback returning to the league for this season.

According to PEOPLE, Dr. Shin explained, “Based on what I saw today, I am fully confident Russell will return to the NFL this season and play at the same world-class level that fans have come to expect of one of the game’s very best quarterbacks.”

This hiatus from the team will mark the first time Wilson has missed a game in the 10 years he has been with the NFL. Geno Smith is set to be his replacement in the meantime. Wilson is one of only six quarterbacks in NFL history to have 149 straight regular-season starts, but after he is forced to miss his first game next Sunday against the Pittsburg Steelers, the incredible streak will end.