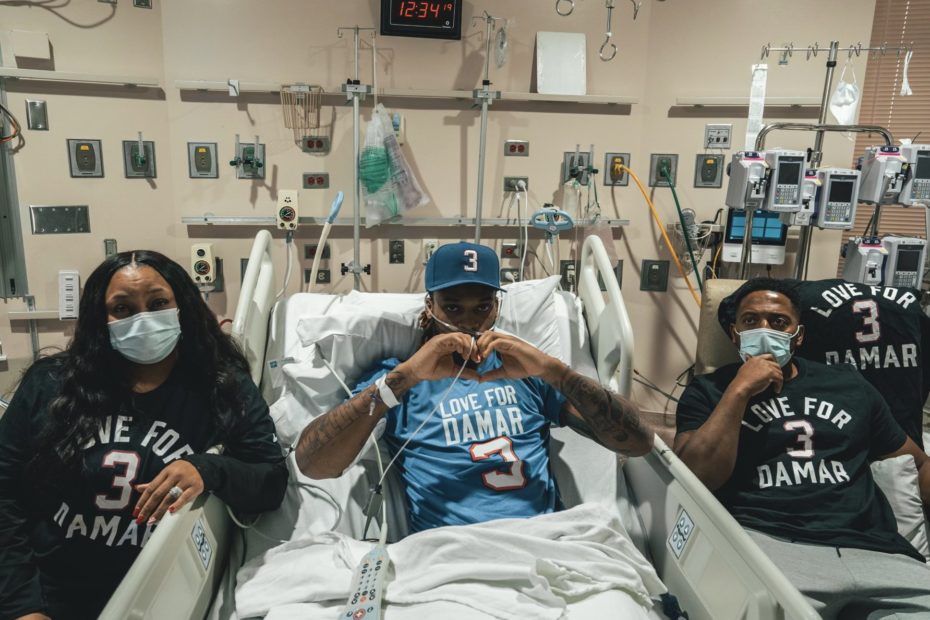 Two weeks after Buffalo Bills player Damar Hamlin went into cardiac arrest on the field, he’s finally able to pay a visit to his teammates.

In early January, the NFL safety player suffered a cardiac arrest on the field, to which he was transferred to a nearby hospital in Cincinnati. At the time of his admission, he was unable to speak to medical examiners and largely used writing utensils to communicate with those around him. Throughout his treatment, the NFL star constantly shared the love he has for his teammates and those who are supporting him through his journey to recovery.

Although he was in critical condition for a period of time, he was discharged from the hospital after a week of receiving medical treatment. “We are thrilled and proud to share that Damar Hamlin has been released from the hospital and returned to Buffalo,” the UC Medical Center said in a statement issued through the Bills. “He is doing well and this is the next stage of his recovery.”

Following his discharge from the hospital, the 25-year-old athlete took to Twitter to celebrate his release. “Headed home to Buffalo today with a lot of love on my heart,” he wrote on the social media website. “Watching the world come together around me on Sunday was truly an amazing feeling. The same love you all have shown me is the same love that I plan to put back into the world n more.”

RELATED: Grant Wahl’s Wife is OUTRAGED Over Misinformation Regarding Her Husband’s Death at 49

Although his team was equally excited to see him, Bills quarterback Josh Allen said in an interview that many teammates had to wait to visit Hamlin, per doctor’s orders.

The Buffalo Bills are overjoyed about Damar Hamlin’s recovery

“I know some guys were champing at the bit to go see them, but against doctor’s orders, just making sure that he’s getting his rest from recovery and taking it slow, and obviously just trying to get back to being himself,” the quarterback relayed. “So, we’ll take all the time that we need. But I hope he knows the guys are ready to see him.”

Thankfully, Hamlin was able to see his teammates outside of the hospital for the first time over the weekend. Documented by linebacker Matthew Milano, the athlete can be seen in a gray sweatsuit and balaclava embracing his team on Instagram.

As Hamlin focuses on his recovery, he looks forward to watching the rest of his team finish out the rest of the 2023 NFL season.