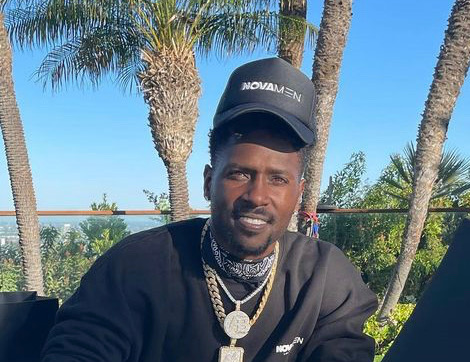 Tampa Bay police issued an arrest warrant for former Buccaneers player, Antonio Brown after he was involved in a domestic battery incident involving a woman.

On Nov. 28, the NFL player was reportedly involved in a verbal altercation with a woman, which became physical after Brown threw a shoe at the woman. He then attempted to evict her from her home by locking her out and throwing her items out of the house. When police arrived at the scene, he refused to vacate the property.

“The suspect exited the residence and threw a shoe at the victim striking her in the ponytail,” the police report read. They continued to detail the situation, explaining that, “The victim had no injuries but believed the shoe was meant for her head. The suspect would not open the door or come outside to speak with officers. The suspect also during this incident attempted to issue an informal eviction to the victim.”

In addition, Brown supposedly placed a fabricated eviction notice on the woman’s door, informing her that she has 7 days to gather her belongings and leave the property. “The suspect continued throughout the incident to state that the victim had no right to be at that residence or to even gain entry to it because she did not live there,” police stated.

A look into the protection order filed against Antonio Brown

Following the incident, a protection order was requested, alongside a warrant for Brown’s arrest. Police reported that the 37-year-old, “was involved in a recent act or threat of violence against themselves or other others; was engaged in an act or threat of violence, including but not limited to acts or threats of violence against themselves, within the past 12 months; may be seriously mentally ill or may have recurring mental health issues.”

They also noted that Brown, “used or threatened to use, against themselves or others, any weapons; and has been arrested for, convicted or, had adjudication withheld, or pled nolo contendere to a crime involving violence or a threat of violence in Florida or in any other state.”

However, according to ESPN, a Florida judge denied a petition for a temporary risk protection order the following day.