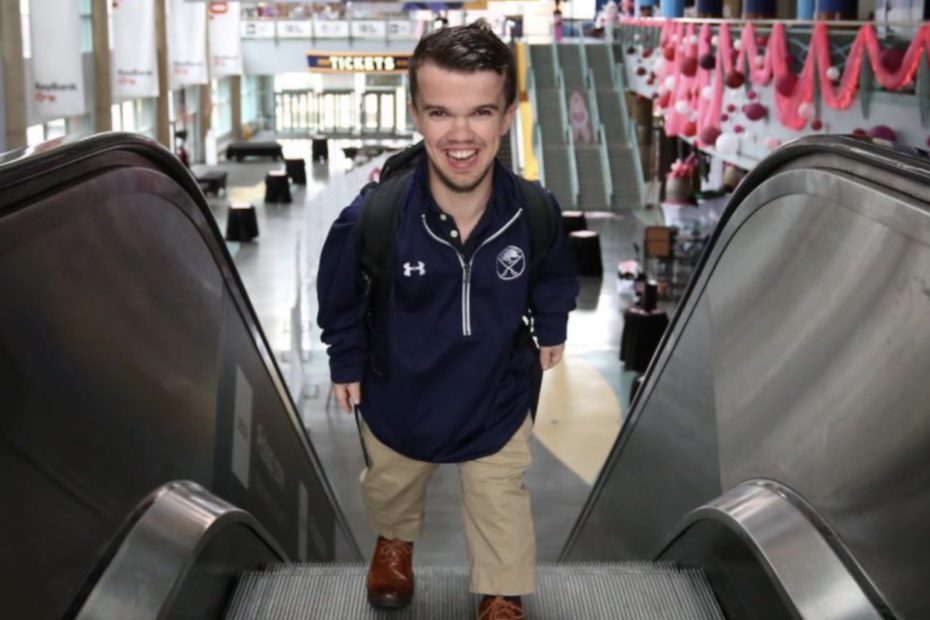 Mat Myers, 31, and His Inspiring Journey to the NHL

Mat Myers, video coordinator for the Boston Bruins, has never let his dwarfism stop him from reaching the top.

As NHL.com reports, roughly 31-years-ago, Marty and Sue Myers were told by doctors that their soon-to-be-born son would have achondroplasia, a type of dwarfism. “My wife and I were like, ‘what does that mean?’ We were just shocked. We didn’t know anything about dwarfism, didn’t know how it got into our genes, how we passed it on to our son. We didn’t know anything,” Marty recalled, thinking back to the doctor’s appointment that changed his and his wife’s life.

And, saying no never seemed to be a problem when Myers was a child. Before he could even walk, Myers’ father encouraged learning to skate. As it turns out, this was very beneficial in the video coordinator’s journey to confidence. “It kind of helped shape my mindset that I can sort of do anything else,” Myers said of his youth. “Hockey’s been my life and I think the biggest connection with it is because it’s really given me my confidence – both in the rink and outside the rink. It makes me feel at my best.”

However, when he reached the age of 12 and hockey teams progressively became more contact based, it was, unfortunately, time for Myers to put his hockey stick away. Although this crushed him, he never let this hinder his love for the sport. Instead of calling it a day, he found new ways to stay involved. Continuing to attend team practices, he began taking notes on all the players’ moves and eventually made his way up to manage his high school hockey team.

Beyond high school, he was also named as a student manager for the University of New Hampshire men’s hockey team.

RELATED: Dwyane Wade Speaks Out After Ex-Wife Makes Harsh Remark About Him and Their 15-Year-Old Trans Daughter

After witnessing Myers’ dedication to the game, coach Dick Umile saw undeniable potential in the manager. “I remember down at BU him giving a pregame speech that was absolutely phenomenal,” Umile reflected. “They put him up on a box so he could get up and talk to our team. He was tremendous. He just had the total respect of our team and everybody involved.”

After graduation, the USA Hockey team called Myers and insisted he join the coaching team and help with new video software. After taking this opportunity, the door to the NHL opened up widely.

“It was neat. It was really surprising…the people at this level – they’re not only the best in the world at what they do on the ice, but these are quality humans off the ice, too,” the video coach said, discussing entering the NHL as a video coordinator coach Nashville, prior to his work with the Boston Bruins.

“I’ve never, ever had an issue once in a locker room here at the NHL level of there being any form of disrespect, joking, mockery, anything of that sort. Everyone’s been completely respectful.”

“And it’s been a little bit of a two-way street, too. I think it’s pretty clear early on that they know that I’m not a former player, but once we have a few conversations, they see the hockey knowledge that I’m able to talk and the insight I’m able to provide that it’s really kind of cool the respect that’s been given immediately,” Myers added.