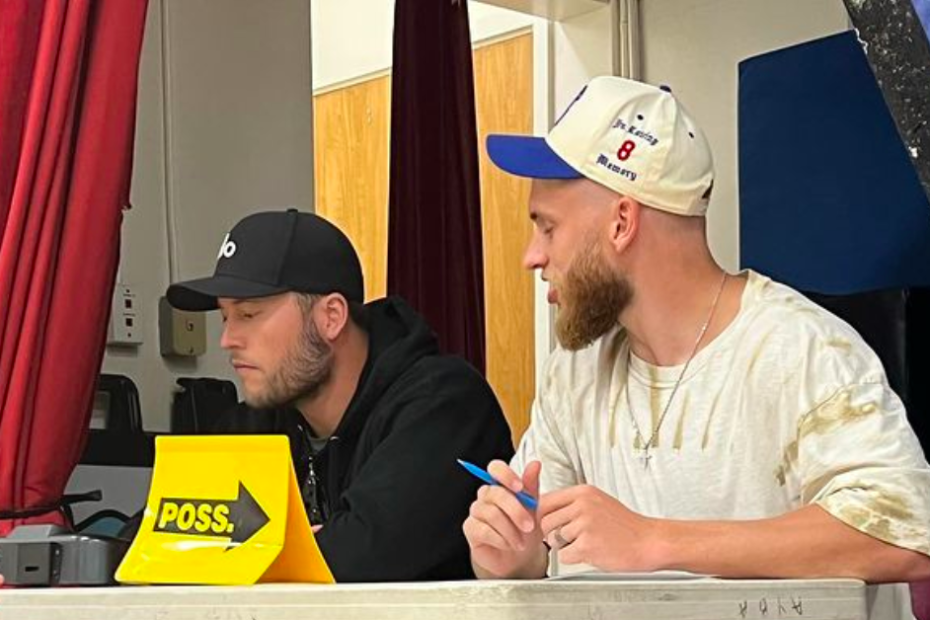 Los Angeles Rams players Matthew Stafford and Cooper Kupp finally got a taste of what it’s like to be an audience member when their wives joined a women’s basketball league.

In an episode of The Morning After with Kelly Stafford, Anna Marie Kupp and Kelly Stafford detailed their first game experience with their basketball league. The two even shared that their husbands found a way to make the time pass as scoreboard operators.

“Anna and I for the first time, actually, played our first basketball game in a women’s league,” Kelly began. “Honestly, it was so fun. Our husbands came and they had a blast.”

Stafford and Kupp have a close relationship on and off their field, which really shined during their time at the basketball game. When they were presented with an unexpected role in the game, they were able to tackle confront the challenge head-on. According to Kelly, “They ended up having to run the scoreboard and do the stats.”

However, the challenge was by no means easy for the two. Apparently, the boys need to stick to football and stay away from recording statistics. “They failed on it multiple times. It was comical,” Stafford’s wife noted.

Even the other girls involved in the league made sure to call out Matthew and Kupp when they messed up the scores. Kelly relayed, “The other girls that are playing are like, ‘Excuse me! Buzzer … buzzer!’ and Matthew was like, ‘Oh my god, okay I’m so sorry.’ “

The Super Bowl champion quarterback also gave his own commentary during the game. Taking to Instagram, Stafford tried his hand at being a sports commentator. The athlete joked, “A lot of standing around … If we had somebody on the other end to elevate and dunk we’d be okay.”

RELATED: Caster Semenya, 2 Time Gold Medalist, Reveals the Shocking Truth Behind Her Journey to the Olympics

In addition, Kelly commented on her game experience and what it was like to participate in this sporting event. “My first shot … almost goes over the entire backboard,” she said.

She went on to add that the shoes she was wearing made it difficult to play the game. Kelly stated, “I had knit Adidas on. I slipped everywhere! Matthew kept looking at me being like, ‘Please stop being so aggressive, you’re gonna injure yourself. You’re sliding, you’re rolling your ankles,’ ” she continued.