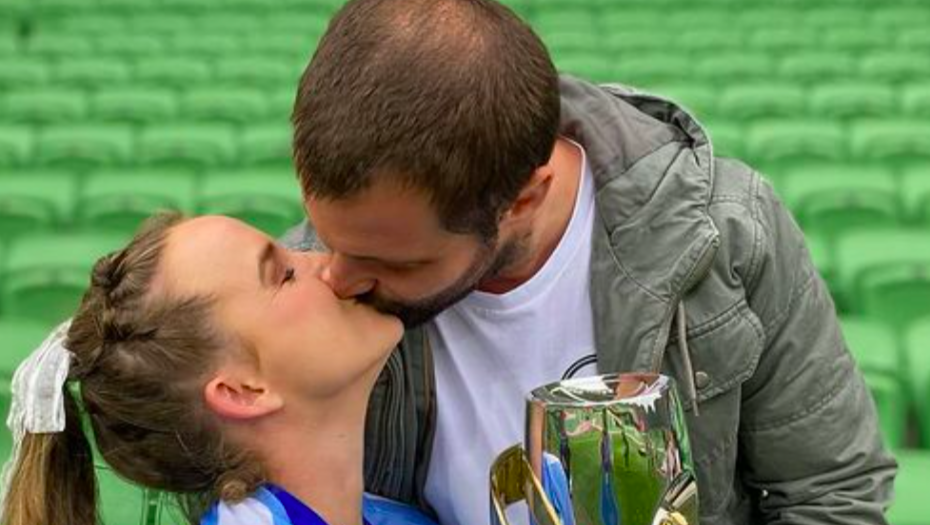 The Westfield W-League is the “home of Australia’s premier women’s football competition” per its Instagram bio. And one of its best players has done a truly premier act after her now fiancé had an epic, premier proposal after a game!

I know, I know, You’re probably like, fill me in, Charlie! Give me the details!

There’s so much premiere-ness to unpack here, so we’ll start with:

Rhali Dobson is a W-Leagus champion. According to the W-League’s Samuel Green, Melbourne City’s…Dobson told “her teammates the day before City’s 2-1 (win) over Perth Glory that she was going to retire from football to spend time by the side of her now fianc(é), Matt Stonham, during his ongoing battle with brain cancer.”

Stonham liked it so he put a ring on it!

Stonham got down on one knee after the match and proposed to the love of his life as the couple now embarks on this incredible next chapter of their lives together. Forever.

What an incredible depiction of love. Dobson making a difficult decision to care for the love of her life while Stonham shows an act of selflessness and chivalry getting down on one knee before the love of his life to show his commitment in pursuing her, wanting to be with her for life as husband and wife.

Dobson reflects on the retirement:

“I actually thought I was going to be a train wreck but I’m actually all smiles,” Dobson said via the W-League. “…We finished the season on a high, it was a great team performance…My family and my partner, he’s down so for me, it’s a nice way to finish my season and what better club to finish with than Melbourne City.”

Nonetheless, the emotional weight of her decision to step away from the W-League is still clear in Dobson’s voice.

“I don’t feel like I’m ready to retire but sometimes life makes those choices for you,” Dobson said via ESPN’s Joey Lynch. “But with everything going on it’s a decision that has to happen — because it’s bigger than the game. Matt and I are very open about everything. He was diagnosed with brain cancer six years ago after a seizure on the soccer field when he was playing. He had brain surgery and that was successful and then he elected to stay on just having reviews with oncology after everything went so well the first time. Purely to help out from a research perspective, he’s really good that way.”

Dobson went on to share with ESPN more of what the diagnosis entails:

“He was having a checkup and they noticed a bit more activity in a very small area [of his brain] back in February,” Dobson said per ESPN. “We’ve caught things exceptionally early, he’s on the very positive end of the scale because of his age. He had no other signs or symptoms, it was for him a routine check-up. But ultimately, it is still brain cancer so I want us to have the opportunity to have everything life has to offer.

“This is bigger than the sport,” Dobson said to ESPN. “He is my absolute world.”

You can read more of what Dobson said to ESPN here.

Congrats on a great career, Dobson! And congrats on making a decision bigger than yourself. Congrats on your newly formed engagement and future marriage team, the Rhali and Matt team!

It’s only fitting to end this on what Rhali said about love one year ago (52 weeks to be exact per the Instagram post):

“~LOVE~
None of this would have ever been dreamed of and accomplished without you,” Dobson said. “Two W-League Championship titles, a Premiers title, a double and an Invincible. No one knows what this season was truly like for us as a couple: the brickwalls, the hurdles, speed-humps…but as always the world only throws at you, what it knows you can handle.”