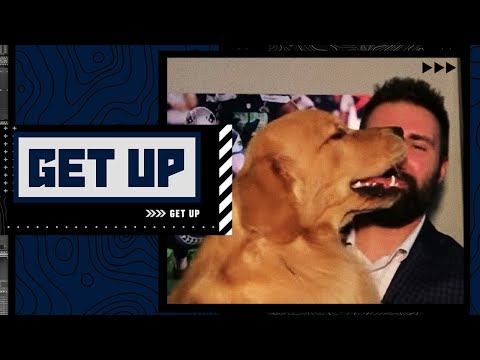 After Rob Ninkovich retired from his career in professional football in 2017, roughly 2 years later he had a job working for ESPN as an NFL analyst.

Last week, he sat down on an episode of ESPN’s Get Up! to discuss predictions for the Dallas Cowboys and their upcoming game against the New York Giants.

Although routine in nature, there was one aspect of the broadcast that no one could have predicted: Ninkovich’s golden retriever saying hello to the camera.

“What did we say? If we come along defensively,” one of the ESPN hosts began before breaking out into a smile when Ninkovich’s dog came into view. The host did not acknowledge the dog and finished with the commentary, “This defense has turned into the better units in football. They turned the football over, they pressured the quarterback, they have a linebacker that sidelined the sideline and is versatile.”

However, talk of the Dallas Cowboys game largely went unnoticed when there was a large dog’s tongue sticking out on the frame. Fellow co-hosts broke out into approving nods and made note that the Golden Retriever looked incredibly conformable sitting on the ex-New England Patriot player’s lap.

“All I wish for Christmas, for all of you watching at home, is that you find someone that looks at you the same way Broadie is looking at Rob Ninkovich,” the hostess to the left of the retired athlete joked. She added, “It’s real love, it’s real love. It’s so sweet. By the way, we’re not even going to do the whole graphics where it shows who we picked. Literally, everyone here is picking the Cowboys to win this game.”

With a 100% prediction rate in favor of Dallas, it should not come as a surprise that the Cowboys won 21-6 against the New York Giants. Demarcus Lawrence of the Cowboys also took note of their strong defense and shared after the game, “It’s amazing just to be on a team with a strong defense. It doesn’t get any better than that.”

Although Lawrence has been benched for a majority of the season due to an injury, after making his way back onto the field, he set up 10 of the 15 first-half points during the game. Trevon Diggs noted his talent and referred to Lawrence with the sentiments, “You know, he’s still very much the leader of the defense. He’s a veteran. He is still our guy. So I expect that from him all the time. He’s a great player.”