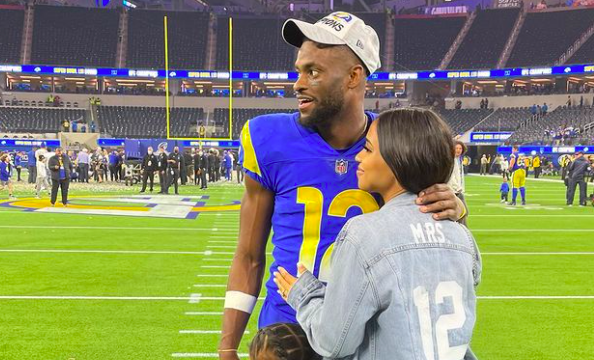 Los Angeles Rams player Van Jefferson’s Super Bowl night was all the more exciting when he found out his wife went into labor during the halftime show.

The 25-year-old champion helped lead his team to victory over the Cincinnati Bengals during this year’s Super Bowl, but he couldn’t exactly stay for the afterparties. After the 23-20 win was called, he was informed that his wife Samaria left the stadium moments before the halftime show and was going into labor.

“I did not want to miss the game for anything. I watched him play since high school, college, and now the NFL, so I was dedicated to go,” the mother explained during an interview with PEOPLE. “We were walking up to the stadium and I was having to stop every five minutes from the pain.”

Samaria recalled trying to suppress the pain throughout the game, but by halftime, her contractions became too unbearable for her to ignore. She relayed, “I’m crying at this point. I was like, ‘I can’t take it anymore.’ ”

So, she left the stadium on a stretcher and was transported to a nearby hospital. As Jefferson continued to dominate on the field, his wife began the process of giving birth to their third child.

Although the excitement and buzz of winning a Super Bowl were evident, the 25-year-old athlete didn’t have any time to reflect on his big win because he was informed that his wife had left the building.

Van Jefferson refelcts on the birth of his son

Although he ultimately was forced to watch his wife give birth over FaceTime, his son’s birth was particularly special. And, Jefferson acknowledged that as well.

“It’s been a crazy week. To have a baby on Super Bowl day … and win the Super Bowl too is a blessing,” the father shared. “It’s been two wins so we’re excited.”

However, the cherry on top of the entire event is the name the couple decided to give their son. Considering the championship circumstances, the high school sweethearts went with a very appropriate theme.
“Champ Curtis Jefferson,” Jefferson said during a podcast, revealing the name of his newborn. “That’s the name we got.”