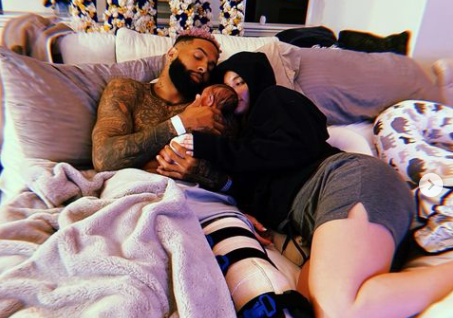 Odell Beckham Jr. has had quite the past 10 days and provided everyone with an update on Instagram. In a post he shared on Wednesday morning, OBJ announced he had successful knee surgery just days after welcoming his first child into the world with Lauren Wood.

Wood, best known for her time on Wild ‘N Out, and Beckham Jr. have been seeing each other since November 2019 and announced their pregnancy in November 2021. On February 17th at 6:05 am, the two welcomed their healthy son, Zydn, and they couldn’t be any happier.

“THE biggest blessing I’ve ever had in my life arrived here on earth! The words, I can’t even put together for the overwhelming emotions that ran thru me … a moment I will never forget and cherish forever,” said OBJ on Instagram. Zydn was born n at that moment I knew my life changed for the better.”

It’s a beautiful thing when two love birds begin a family and that’s what happened just a few days ago. It’s almost as priceless as OBJ’s teammate and fellow receiver, Van Jefferson, welcomed his new son just hours after their Super Bowl win. Now, OBJ has his own little ray of sunshine.

“Lauren Wood, u changed my life forever and delivered the most beautiful gift of all… EFFORTLESSLY! Ur strength throughout this gives me the courage to keep goin because i now kno with u by my side and holding it down for me, I can get thru anything. I love u so much. And so the journey continues,” OBJ added.

The birth of his son wasn’t the only update Odell Beckham Jr. provided us with on Wednesday. He also spoke about his Super Bowl win, which came on February 13th – just four days before Zydn was born. It was a moment he’ll never forget as he reached the pinnacle of football.

The Los Angeles Rams won Super Bowl LVI 23-20 in a thriller that came down to the final minute of play. OBJ recorded two catches for 52 yards and a touchdown in the game, but only played half the game after suffering a torn ACL in the closing minutes of the second quarter.

It was a heartbreaking moment for a player that seemed to be at the top of his game, but one that was salvaged by a Super Bowl ring on his finger and celebration after the game. According to OBJ’s Instagram post, he had successful knee surgery on February 22nd.

“If there’s one thing I can take from all the work and growth, it is that I AM as resilient as they come. Too much heart to not keep walkin in faith!” said OBJ. “Lol I kno yall probably tired of hearing me say this every year now “this my year” BUT IM GON BE BACK!!! U better believe imma be back , and imma be back better than ever before.”

The NFL Free Agency period is set to kick off on March 16th and there’s uncertainty as to whether or not OBJ will return to the Rams for a chance at running it back. He’s a free agent and can ultimately decide where he wants to go, so the ball is completely in his court this offseason.

YOU MAY ALSO LIKE: Top 25 Moments From Super Bowl LVI

No matter where he decides to go, OBJ will have the support of his girlfriend, Lauren Wood, and their new son, Zydn. With a successful surgery following an impressive postseason with the Rams, there’s a good chance we see a full resurgence of Odell Beckham Jr. in the NFL next season.