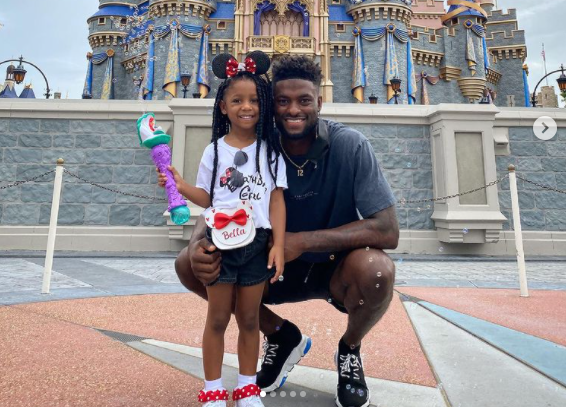 Los Angeles Rams’ wide receiver Van Jefferson celebrated the birth of his son just moments after he helped his team win the ultimate prize in football – the Super Bowl. Jefferson and his wife, Samaria Jefferson, now have two children, including a five-year-old daughter named Bella.

Samaria spoke of her pregnancy with The Athletic, stating she hoped her water didn’t break during Super Bowl LVI. Several hours later in the third quarter, Samaria was faced with that reality as she was reportedly seen leaving SoFi Stadium in a stretcher about to give birth.

Van Jefferson wasn’t notified at the time, something they previously agreed on as a couple. In the interview with The Athletic, she stated, “You play, I’ll see you at the hospital afterwards. I will never take that moment away from him. I want to see him glorify God on the field that day,”

RELATED: 25 Athletes and Their Kids

In addition to receiving his first baby boy on Sunday night, Jefferson also had four receptions for 23 yards in the Rams’ 23-20 win over the Cincinnati Bengals in Super Bowl LVI. As soon as the game ended, he rushed to the hospital to meet his son and celebrate the moment with his wife.

Jefferson had himself quite the breakout season in his second year after being drafted by the Rams in the second round of the 2020 NFL Draft. He finished the season with 50 catches for 802 yards and six touchdowns – all of which were improvements from his rookie campaign.

It wasn’t a perfect game for the Los Angeles Rams, but it was enough to get the job done and that’s all that matters once you make it to the final game of the year. They faced ups and downs all year long, but ultimately came out on top – something many people doubted they could do.

Matthew Stafford opened the scoring with a 17-yard touchdown to Odell Beckham Jr. halfway through the first quarter. Another touchdown throw, this time to Cooper Kupp early in the second quarter gave the Rams a 13-3 lead, but the Bengals scored a touchdown before the half ended.

Joe Burrow connected with Tee Higgins for the second time to open the second half and a field goal by Evan McPherson shortly after gave the Bengals a 20-13 lead. The Rams needed some momentum heading into the fourth quarter, which they got in the form of a 41-yard field goal.

The fourth quarter was gritty on both sides of the ball with no team scoring as the two minute warning passed by. With 1:25 left in the game, Stafford connected with Cooper Kupp for his second touchdown of the game to give the Rams a 23-20 lead, which they rode to a victory.

YOU MAY ALSO LIKE: 20 of the Tallest NFL Wide Receivers

It was the franchise’s second Super Bowl win with their first coming in 1999. It’s their second Super Bowl appearance under the SeanMcVay era, having lost to the New England Patriots in 2018. And it was a day that Van Jefferson and the rest of his family will never forget.