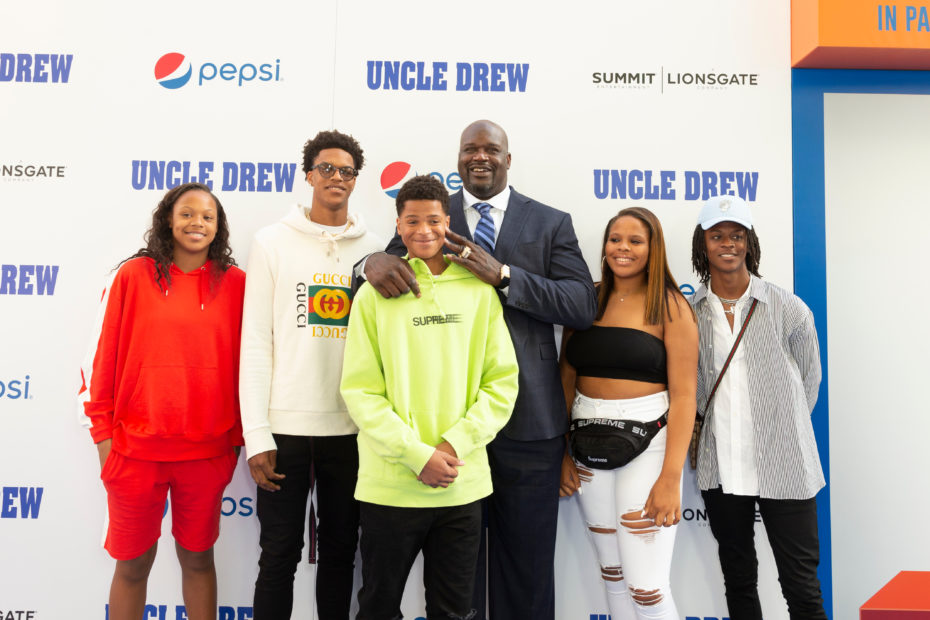 25 Athletes and Their Kids

While we all love to watch athletes compete and do what they do best, we just can’t seem to get enough of watching athletes and their kids. It’s always nice to see an athlete in mom or dad mode, especially since we rarely see them act that way on the field, court, rink, course, etc.

When most athletes rise to stardom, they’re nothing more than teenagers and young adults trying to make a name for themselves in their respective sport. As they grow older, we see them evolve into adults that have plans, goals, and desires that they want to achieve outside of sport.

One of those goals for many athletes today is to start a family – it’s something on most people’s minds as they age. You not only want to find success in your career, but you also want to settle down, build a family, and watch your children achieve success in whatever they want to do.

RELATED: 20 of the Cutest WWE Families

Taking a Closer Look at Athletes and Their Kids

If you’re like us, you can’t help but smile when you see adorable pictures of athletes and their kids – especially if the athlete is a first-time parent or they just had a newborn. It’s something we don’t see very often as most athletes live a private lifestyle, but we love it when we do see it!

We already know of several athletes that are expecting a child in 2022 – including Cristiano Ronaldo and his girlfriend Georgina Rodriguez, who are expecting twins. Ronaldo already has four children, meaning he’ll have six by the end of the year. It’ll also be his second set of twins.

Until then, let’s take a look at some of our favorite athletes and their kids in the world today!

Shaquille O’Neal played 19 seasons in the NBA and is widely regarded as one of the greatest basketball players ever. He had four children with Shaunie Nelson (Shareef, Amirah, Shaqir, and Me’arah) between 2000 and 2006, as well as one child with Arnetta Yardborough (Taahirah) in 1996. He hasn’t been married since his split with Nelson in 2009, but loves his kids dearly.

Roger Federer made his pro tennis debut in 1998 and has put together one of the greatest careers in tennis history. He married former WTA player Miroslava Federer (née Vavrinec) in 2009 and the two have had a pair of twins since – identical twin daughters in 2009 and identical twin sons in 2014.  Don’t worry, his children seem to have the same love for tennis as he does!

Michael Strahan played 15 seasons in the NFL and was one of the most feared defensive ends of his generation. Between 1992 and 1996, Strahan was married to Wanda Hutchins. The two had a son (Michael Strahan Jr.) and a daughter (Tanita Strahan). Strahan married again in 1999 and had twin daughters – Isabella and Sophia Strahan – with Jean Muggli in 2004.

Dwyane Wade played 16 seasons in the NBA and is regarded as one of the greatest shooting guards in basketball history. He was married to Siohvaughn Funches between 2002-2010 and had two sons together. He also had a son with Aja Metoyer in 2013, a daughter with Gabrielle Union in 2018, and raises his nephew. Him and Union remain happily married today.

Known to many as ‘The Rock,’ Dwayne Johnson is one of the greatest WWE superstars of all-time and has become one of the biggest actors since retiring from the sport. He was married to Dany Garcia from 1997 to 2007 and they had one daughter together (Simone). He then married Lauren Hashian in 2019 and they’ve had two daughters together (Jasmine and Tiana).

Tiger Woods will go down as one of the greatest golfers to ever play when he decides to retire. He has had an incredible career since turning professional in 1996 and currently has 109 wins. He had two children with Elin Nordegren – a daughter named Sam Alexis Woods in 2007 and a son named Charlie Axel Woods in 2009. Tiger Woods is now dating Erica Herman.

Chris Bosh played 13 seasons in the NBA and was recently named to the Hall of Fame as a player in 2021. He famously won back-to-back NBA titles with LeBron James, Dwyane Wade, and the rest of the Miami Heat. Bosh has been married to Adrienne Williams since 2011 and the couple raise five children together – two daughters (one with Allison Mathis) and three sons.

James Rodriguez is a soccer player for Al-Rayyan SC and has three goals in seven games since joining the club in 2021. He previously played for Real Madrid and Bayern Munich. He married Daniela Ospina in 2011 and had a daughter (named Salome) in 2013. The two split in 2017, but Rodriguez welcomed his first son (named Samuel) to a surrogate mother in 2019.

David Beckham is one of the most iconic and influential soccer players of all-time. He has been married to Victoria Beckham since 1999 and the two have formed quite the power couple – and power family. They have four children together, including three sons (Brooklyn Joseph in 1999, Romeo James in 2002, and Cruz David in 2005) and one daughter (Harper Seven in 2011).

Jeff Gordon appeared in 805 NASCAR races over a 25-year career between 1992 and 2016. He is most known for driving the No. 24 Chevrolet for Hendrick Motorsports. He has been married to Ingrid Vandebosch since 2006 and they’ve had two children since – a daughter named Ella Sofia Gordon in 2007 and a son named Leo Benjamin Gordon in 2010.

Drew Brees played 20 seasons in the NFL, five for the San Diego Chargers and 15 for the New Orleans Saints. He decided to retire after the 2020 season as one of the greatest quarterbacks to ever play. He has been married to Brittany Dudchenko since 2003 and the two have four children together – three sons born between 2009 and 2012, and a daughter born in 2014.

Tony Hawk is one of the most iconic and influential skateboarders in the history of the sport. He turned pro in 1982 and retired in 2003 after over 20 years of incredible skating. He has four children – three sons (Riley, Spencer, and Keegan) and one daughter (Kadence) – with three different women – Cindy Dunbar, Erin Lee, and Lhotse Merriam.

Tom Brady played 22 seasons in the NFL and is arguably the greatest football player of all-time. He has seven Super Bowl wins, which is more than any franchise in NFL history. He has three children, the first coming with girlfriend Bridget Moynahan in 2007. He then married Gisele Bündchen in 2009 and the couple have had two children since – a son and a daughter.

Michael Phelps is one of the most famous swimmers of all-time. With 28 Olympic medals (23 of which were gold), he’s the most decorated Olympian of all-time. During the 2008 Olympics, he won a record eight gold medals. He has been married to Nicole Johnson since 2016 and the couple have three sons together – Boomer, Beckett, and Maverick.

Stephen Curry is currently playing in his 13th season in the NBA, but is already regarded as one of the best point guards of all-time. He’s a two-time scoring champ, two-time MVP, and three-time NBA champion. He has been married to Ayesha Curry since 2011 and the couple have three children together – daughters Riley and Ryan, and son Canon.

Oscar De La Hoya is one of the most recognizable boxers of all-time, winning 11 world titles in six different weight classes over a 16-year career in the sport. He has six children – a daughter (Atiana) with Shanna Moakler, a son (Oscar) and two daughters (Nina and Victoria) with Millie Corretjer, and two sons (Jacob and Devon) from previous relationships.

Neymar Jr. is a soccer player for Paris Saint-Germain and has been with the club since 2017. He has 265 goals and 205 assists in 452 senior appearances since 2009, including 90 goals in 130 appearances for PSG. Although he’s currently dating Bruna Biancardi, he previously had a son (Davi Lucca) with Carolina Dantas in 2011.

LeBron James is currently playing in his 19th season in the NBA and is widely regarded as one of the greatest basketball players of all-time. He is heavily invested in his family, which includes two sons (Bronny and Bryce) and a daughter (Zuhri). He has been married to his high school sweetheart, Savannah Brinson, since 2013 and they remain a power couple in the world today.

Luis Suarez is a soccer player for Atlético Madrid and has been with the team since 2020, having also played for Barcelona, Liverpool, and Ajax. He has 434 goals and 311 assists in 686 senior appearances. He has been married to Sofia Balbi since 2009 and the couple have three children together – a daughter (Delfina) and two sons (Benjamin and Lauti).

Gerard Pique is a soccer player for Barcelona and has been with the team since 2008, having also played for Manchester United between 2004 and 2008. He has played in 644 games as a senior and is one of the best defenders of all-time. He has two sons (Milan and Sasha) with famous singer-songwriter Shakira. The two met during the shooting of a music video.

Cristiano Ronaldo is a soccer player for Manchester United and joined the team in 2021 after stints with Juventus and Real Madrid. He has 688 goals and 301 assists in 922 senior appearances. He is expecting twins with Georgina Rodgriguez in 2022, which will be their third child together. Ronaldo also has two daughters and one son from previous relationships.

Anna Kournikova is a retired professional tennis player that turned pro in 1995 and retired in 2003. She had a career singles record of 209-129 and a career doubles record of 200-71. She is currently with famous singer-songwriter Enrique Iglesias and the couple have a son (Nicholas) and two daughters (Mary and Lucy). Lucy and Nicholas are fraternal twins.

Serena Williams is one of the most decorated and recognizable professional tennis players of all-time, especially among women. She has an 855-152 career singles record with 73 singles titles and 23 Grand Slams. She is married to Alexis Ohanion and the couple have a daughter together (Alexis Olympia Ohanian Jr.), who could follow in her mother’s footsteps one day.

Canelo Alvarez is the greatest pound-for-pound fighter in the boxing world today. He has a 57-1-2 professional record inside the ring, including multiple world titles in multiple weight divisions. He recently married his longtime partner, Fernanda Gomez, in 2021 and has four children (three daughters, one son) – all of which have different mothers.

Lionel Messi is a soccer player for Paris Saint-Germain and has been with the team since 2021 after spending 18 years with Barcelona. He has 679 goals and 413 assists in 805 senior appearances. He has been dating Antonella Roccuzzo since 2008 and the couple has three sons together – Thiago, Mateo, and Ciro. They were born between 2012 and 2018.

Which Athletes and Their Kids Are Your Favorite?

Athletes are treated like royalty, but they’re normal human beings just like everyone else. When not practicing or competing, most athletes are usually at home doing what mothers and fathers do best. If not, then they’re likely searching for that special someone to start a family with.

Since athletes are usually teenagers when they rise to fame, they still have a lot of life to live when they eventually retire. Even Tom Brady, who just retired from the NFL after 22 amazing seasons, is only 44 years old and is dedicating the rest of his life to his wife and three kids.

YOU MAY ALSO LIKE: 20 Adorable Football Families You Probably Already Love