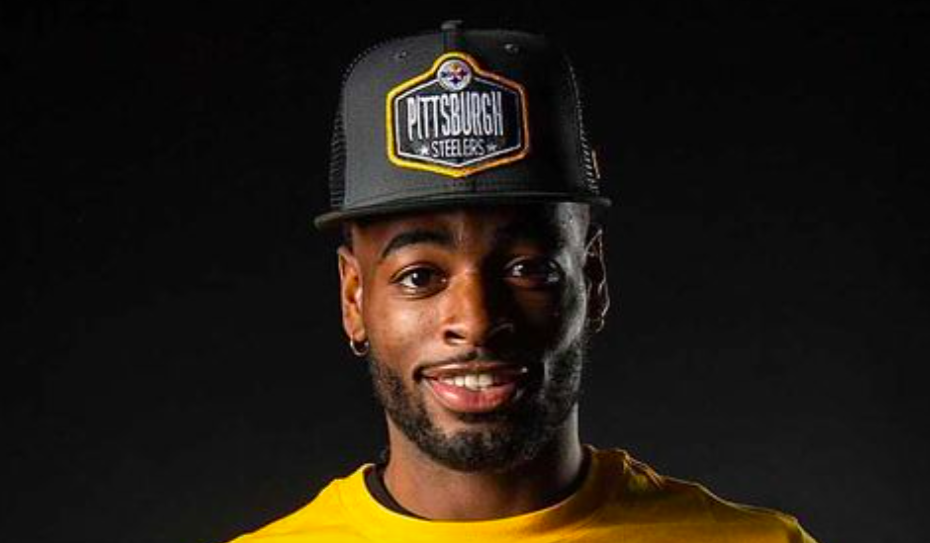 When you picture NFL Draft night, it’s usually a time of celebration, surrounded by friends and family with those moments captured either via a remote camera or, for projected first round picks, in the green room where the draft is being held. It’s also a time of reflection for players and their family members, loved ones, friends, support system, and coaches to look back on all the work, the early morning, the late nights the selflessness from people to help their football student-athlete accomplish his dreams.

Dreams come true on NFL Draft night. Round-by-round. Over a period of three days in particular during this draft.

For Najee Harris, Alabama Crimson Tide’s standout running back, that call happened to come on day one of the draft. Harris was drafted in the first round with the 24th pick by the Pittsburgh Steelers (per Steelers.com’s Matt Williamson).

RELATED: Check This Out: ‘NFL Draft With A View’ Order Coming Right Up For LA Rams 2021 Draft

“I can’t put into words how excited I am to be a Pittsburgh Steeler…it was one of my dreams to always make it here in the NFL, now I’m here,” Harris told Rob Lowe, who was filling in for Ellen DeGeneres on her show. “So, thank you Art Rooney and Kevin Colbert for all picking me and…I’m ready to go to work and not take anything for granted, for sure.”

And, get this, as Harris celebrated his dream come true in making the NFL, he chose not to attend the actual live location of the NFL Draft in Cleveland, even though he was invited there per Lowe and Harris.

“(There’s) only a certain people can get invited to the draft, it is a special event, and I thank them…for inviting me…but…I decided to decline it and do it a different way,” Harris told Lowe. “Feel like I wanted to do something that was more of giving back to my community…”

Here’s where Najee decided to go the day of the draft before heading to a local restaurant to watch the draft then celebrate with family and friends:

“I’m born and raised from the Bay Area, northern California, so…there’s a homeless shelter there that I used to stay in…I felt it was the whole community of the Bay Area (that) helped me get where I am today,” Harris said. “So, I decided to not go there (to the draft) and to have it in the Bay Area, in Richmond…a soup kitchen where I used to stay at with my family.”

“I wanted to make sure I wanted to do something for the kids, to that like I was once in your position I always want to be a motivation, like a big brother to kids like that…” Harris said.

Harris told Lowe he understands how it can be embarrassing to be in that position because he said he was embarrassed and would get dropped off after football practice at a corner so people wouldn’t know he was living at the homeless shelter. The running back understands it can be embarrassing but encourages kids in those homeless shelters to keep going and to have faith, even when times get difficult.

“For the kids that’s in that position, that’s struggling, that’s going over these obstacles, I want to tell them that there’s always light at the end of the tunnel,” Harris said.

The 2020 All-American, Doak Walker award winner for most outstanding college football running back, who finished fifth in Heisman voting (let me remind you, as a running back!), continued on emphatically and passionately giving kids this incredible advice:

“It may not seem like things (are) going well, things that’s going your way but it’s a good saying that always helped me out was: ‘Faith is seeing light with all your heart when all your eyes sees darkness,'” Harris said. “Even though you may not see light at the end of the tunnel, there is better things out there in the future, you just got to keep pushing.”

On the field, Williamson paints the picture of what having a guy like Harris on a team can do.

“Only time will tell, but he provides the Steelers with a variety of options. Obviously, he’s well-suited to be the featured back on first and second downs. Additionally, he has the tools to take over the short yardage duties. On third and fourth downs with a few yards to go, I don’t expect to see as many passes or finesse styles of runs. Just give it to Harris and let him do the rest. While we may see more zone style running plays going forward, with Harris, the Steelers offense will have the ability to simply impose itself on the opponent.”

Yeah, if Harris continues to just do what he’s been doing at ‘Bama, the AFC North and the NFL better take notice.