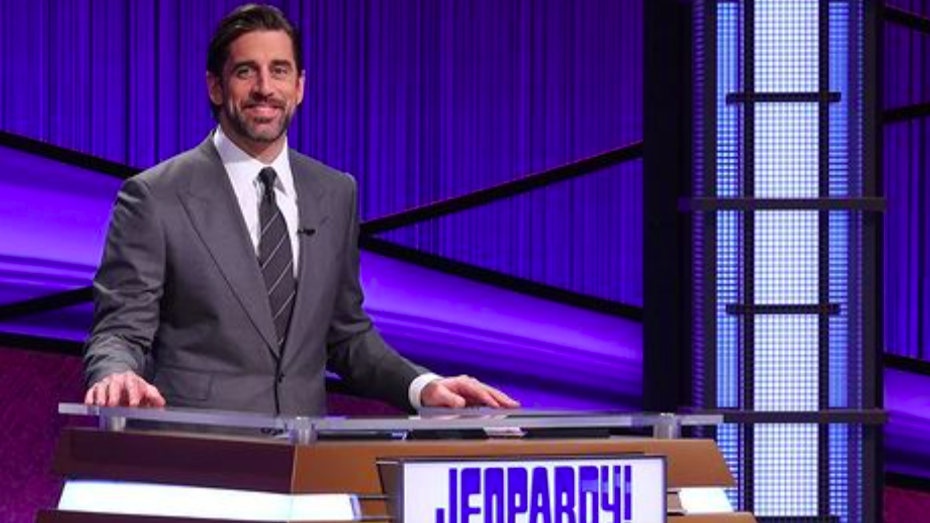 Aaron Rodgers Shares Behind-The-Scenes Sticky Notes Of Encouragement And Reminders From The Jeopardy! Podium As A Guest Host. You Have To Read This Hilarious Reminder On One Of The Notes

Aaron Rodgers is living out a dream right now as a Jeopardy! guest host!

Sure, he may be the defending NFL MVP and has a Super Bowl to his name but this seems to be right up there with what the Green Bay Packers quarterback has experienced.

Rodgers is taking this gig seriously. He wants to respect the title that was held by long-time host Alex Trebek.

From watching the show growing up at his grandparents, to recording the shows at his home with his “tivo” being 90-percent of Jeopardy! episodes (per a Jeopardy! interview), this show means so much to the NFL’s MVP.

So, naturally, he wants to go into this job with a laser focus. Probably much similar to what he does as a NFL quarterback, but instead of lining up behind center, this time, it’s behind a podium.

Aaron takes you behind-the-scenes to share what “sticky notes” (as Rodgers mentions) he placed on the Jeopardy! host podium as some reminders and encouragement as the show is being taped.

And, of course, the utmost important:

“This is the @jeopardy podium, and my sticky notes from the 2nd day of filming,” Rodgers said in the Instagram post. “I used a lot of these stickies over the couple days of filming and put reminders on there like ‘Speak Less’, which was an ode to Paul Rudd on Forgetting Sarah Marshall, during surf lessons; ‘do less’. ‘Slow Down’, a reminder for me when reading the clues 💯. ‘Stand Up Straight’; every time I’m reading clues I’m bent over, so that was a reminder to stand up in certain moments when I knew I was on camera.”

Rodgers went on to add:

“’Relax’ and ‘Energy’ were just a couple other good reminders as well,” Rogers said. “And the last one, was just to check if anyone was looking at my podium between games. Turns out, John the stage manager was, and we had a good laugh about it 😂😂😂 #lovethisshowsomuch #somuchgratitude #last3days #”.

Rodgers was also a champion in 2015 on “Celebrity Jeopardy!” and recently posted about the wardrobe choice between contestant Aaron and host Aaron:

Rodgers is living a dream. It’s been just a bunch of Super Bowl-of sorts moments for Aaron.