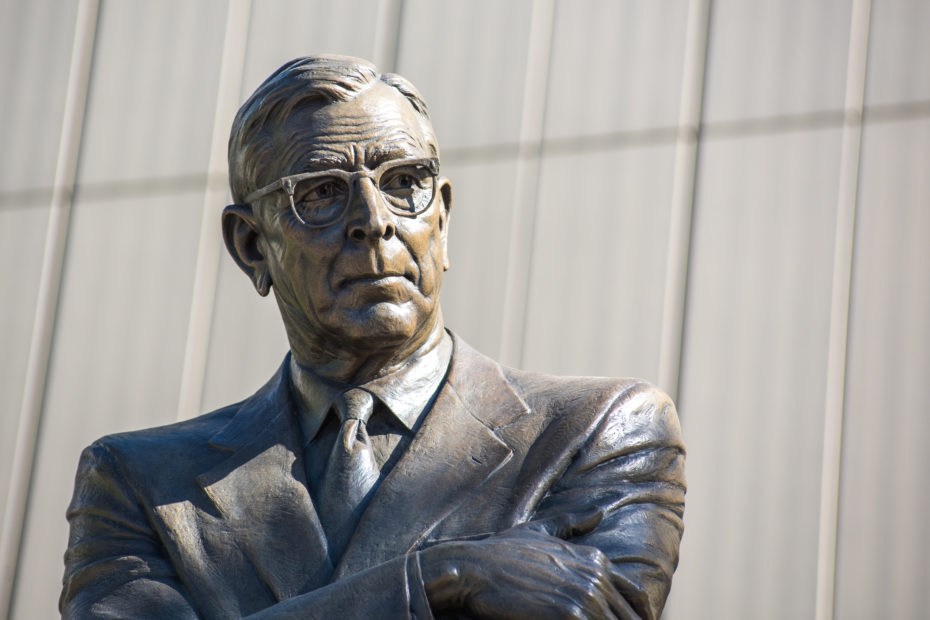 20 of the Best Coaches of All Time

Coaches are often asked to do a lot when turning their team into a consistent winner and while most coaches will fail, the best coaches of all-time did the opposite. They exemplified greatness with every win they celebrated and loss they suffered – always choosing to lead by example.

The best coaches of all-time knew how to win and they did it regularly, but the impact they have on their players – and team as a whole – goes far beyond what the statistics will ever show. They’re not only teachers of football, but act as role models and mentors to those under them.

It’s not about just teaching the player, it’s about teaching the person – the individual. The best coaches of all-time knew how to get the most out of their team and it’s something that was reciprocated throughout the community they represented. They were and still are legends.

RELATED: 25 of the Best College Football Coaches of All-Time

Who Are the Best Coaches of All-Time?

Trying to determine who the best coaches of all-time are in one sport is difficult, let alone across all sports, but that’s exactly what we’re going to do today. It’s not going to be easy, we’ll have to make some extremely hard decisions, and we’ll likely even have some questionable calls.

Knight was hired by Indiana ahead of the 1971-72 season and had the first 30-win season of his coaching career by 1974 – going 31-1 that season. The following year, he went a perfect 32-0 and won his first national title. He would go on to have two more 30-win seasons with Indiana.

Gregg Popovich is a future Hall of Fame professional basketball head coach that currently has a 1,344-701 record in 2,045 career games as an NBA coach – all of which with the San Antonio Spurs. He has led the team to five NBA Championships during his illustrious 26-year tenure.

Popovich was originally an assistant coach for the Spurs between 1988 and 1992, and the Golden State Warriors between 1992 and 1996, before being named head coach of the Spurs. He is the longest-tenured head coach in NBA history and also has an Olympic gold medal.

Tom Landry is a Hall of Fame professional football head coach that retired with a 250-162-6 record in 418 career games as an NFL coach – all of which with the Dallas Cowboys. He led the franchise to five NFC Championships and two Super Bowl titles during his 29-year tenure.

Landry didn’t win a game his entire first year as head coach of the Cowboys, finishing the 1960 season with an 0-11-1 record. Between 1966 and 1985, he helped turn the franchise around and led them to a winning record each season – including 16 seasons with at least 10 wins.

Joe McCarthy is a Hall of Fame professional baseball manager that finished his career with a 2,125-1,333 record in 3,458 career games as an MLB manager – five years with the Chicago Cubs, 16 years with the New York Yankees, and three years with the Boston Red Sox.

McCarthy won the NL Pennant with the Cubs in 1929, but a majority of his success came with the Yankees. Between 1932 and 1943, he led the Yankees to seven World Series titles (four straight) and eight AL Pennants. He finished with at least 100 wins on six different occasions.

Knute Rockne is a Hall of Fame college football head coach that retired with a 105-12-5 record in 122 career games as a college football coach – all with the University of Notre Dame. He led them to 5 undefeated seasons and 3 National Championships during his 13-year tenure.

Rockne would’ve achieved a lot more with the Fighting Irish, but was diagnosed with an illness in 1929 and tragically passed away in a plane crash on March 31, 1931. He’s known for bringing Notre Dame into relevance in college football and helped popularize the forward pass play.

George Halas is a Hall of Fame professional football head coach that compiled a 318-148-31 record in 497 career games as an NFL head coach – all of which with the Chicago Bears. He won six NFL Championships during his 40-year tenure, including another league title in 1921.

Although his stats show him as head coach, Halas was actually the founder and original owner of the Bears’ organization – as well as co-founder of the American Professional Football Association (now known as the NFL). He was much more than a coach, he was an innovator.

Casey Stengel is a Hall of Fame professional baseball manager that finished his career with a 1,905-1,842 record in 3,747 games as a major league manager. He struggled most of his career, compiling a 756-1,146 record with the Brooklyn Dodgers, Boston Braves, and New York Mets.

Paul ‘Bear’ Bryant is a Hall of Fame college football head coach that retired with a 323-85-17 record in 425 career games as a NCAA head coach. He enjoyed 13 successful seasons with Kentucky, Maryland, and Texas A&M before spending 25 illustrious years with Alabama.

Before joining Alabama, Bryant already had three bowl wins under his belt. During his 25 years at Alabama, he won 12 bowl games, 13 conference championships, and six national titles. He had a perfect season on three different occasions – two of which were championship years.

Dean Smith is a Hall of Fame college basketball head coach that compiled a 879-254 record in 1,133 career games as an NCAA head coach. He was an assistant at Kansas, Air Force, and North Carolina before earning the Tar Heels’ head head coach job ahead of the 1961-62 season.

Pat Summitt is a Hall of Fame women’s college basketball head coach that finished her career with a 1,098-208 record in 1,306 games. She spent her entire 38-year career with the University of Tennessee and currently has the third-most wins in college women’s basketball history.

Red Auerbach is a Hall of Fame professional basketball head coach that compiled a 938-479 record in 1,417 career games as an NBA coach. He coached the Washington Capitols for three seasons and the Tri-Cities Blackhawks for one season before building a dynasty in Boston.

Auerbach went on to coach 16 seasons with the Celtics. During that time, he led the franchise to nine straight Eastern Conference Championships, 10 straight NBA Finals appearances, and nine NBA Championships (including eight straight) before handing the team over to Bill Russell.

Don Shula is a Hall of Fame professional football head coach that finished his 33-year coaching career with a 328-156-6 record in 490 games. He spent seven seasons with the Baltimore Ravens and 26 seasons with the Miami Dolphins, winning a league title with both teams.

Scotty Bowman is a Hall of Fame professional hockey head coach that had a 1,244-573-314 record in 2,141 career games as an NHL coach. He spent time with the Penguins, Sabres, Canadiens, Blues, and Red Wings, famously winning a Stanley Cup with three of the five teams.

Nick Saban is a future Hall of Fame college football head coach that currently has a 274-67-1 record in 342 career games as an NCAAF coach. He spent the first 11 years of his college coaching career with Toledo, Michigan State, and LSU before being hired by Alabama.

In five seasons with LSU, he won three bowls – including his first National Championship in 2003. He was hired by Alabama in 2007 and has a 178-25 record ever since. He has led the school to six National Championships and has the most title wins by a college head coach.

Mike Krzyzewski is a Hall of Fame college basketball head coach that just retired from the game following a 47-year coaching career – five seasons at Army and 42 legendary seasons with the Duke Blue Devils. He finished his career with a 1,202-368 record in 1,570 games.

Although he didn’t achieve much at Army and had three mediocre seasons to start his Duke career, things were lights out ever since. The Blue Devils would go on to win the ACC Tourney 15 times, the National Championship five times, and made 13 Final Four appearances.

Bill Belichick is a future Hall of Fame professional football head coach that currently has a 290-143 record in 433 career games as an NFL coach. He was an assistant for nearly 10 years before being hired as head coach of the Cleveland Browns in 1991, where he spent five years.

He didn’t achieve much in Cleveland, except for one 11-5 season in 1994. He took over as head coach of the New England Patriots in 2000 and won his first Super Bowl in 2001. By 2004, he had three Super Bowl wins and has seven total to date – all with Tom Brady at quarterback.

Phil Jackson is a Hall of Fame professional basketball head coach that retired with a 1,155-485 record in 1,640 career games as an NBA coach. After spending five seasons as an assistant NBA coach, he was hired as head coach of the Chicago Bulls, where he spent nine seasons.

During that nine-year stint, Jackson won six NBA Championships – all with Michael Jordan. After taking a season off in 1998 following his second three-peat, he joined the Lakers and won three more titles in his first three years. He won two more titles later on for 11 total as a coach.

Vince Lombardi is a Hall of Fame professional football head coach that compiled a 96-34-6 record in 136 career games as an NFL coach. He would’ve coached much longer, but passed away of cancer in 1970. While he only coached 10 seasons, his impact will live on forever.

Lombardi spent the first nine seasons of his coaching career with the Green Bay Packers. He led the franchise to six Conference Championships, five NFL Championships, and two Super Bowl victories – the first ever Super Bowls. He went 7-5-2 in his lone season with Washington.

John Wooden is a Hall of Fame college basketball head coach that finished his legendary career with a 664-162 record in 826 career games as an NCAAM coach. He spent his first two years as head coach at Indiana State before a legendary 27-year tenure with the UCLA Bruins.

During that stint with the Bruins, Wooden led the school to 10 NCAA Championships in a 12-year period – including seven-straight between 1966 and 1973. He also led his team to a record 88 consecutive wins, which included two of his four total undefeated seasons.

Who Are the Best Coaches Right Now?

The best coaches of all-time helped inspire the new generation of coaches we see in sports today. In fact, some of the coaches listed above are still active in their respective sport – we’re looking at you, Belichick, Saban, and Popovich. Their legacies are still some of the best ever.

YOU MAY ALSO LIKE: 20 Winningest College Basketball Coaches of All-Time

If the coaches listed above continue their bright careers, they very well could find themselves on our list of the best coaches of all-time someday. Of course, they could also become one of the many all-time great coaches we had to leave off the list – even though we didn’t really want to.