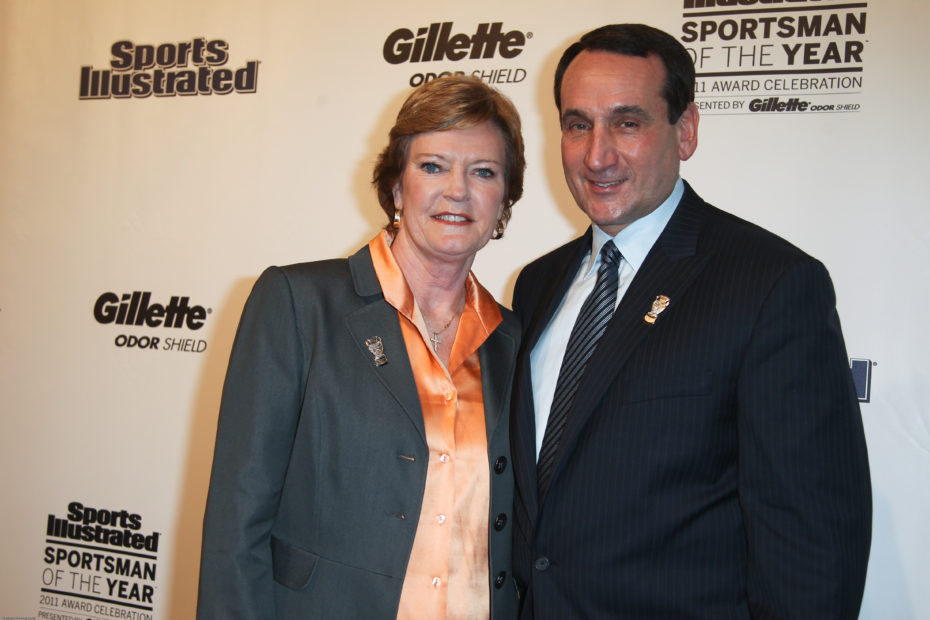 March Madness has kept us extremely busy as we get to witness some of the winningest college basketball coaches of all-time chase the ultimate prize with their student athletes. It’s one of the most exciting and engaging months for sports fans and colleges across the country.

Winning a game doesn’t come easy in the NCAA, but the winningest college basketball coaches found a way to beat the system. They not only won with their respective schools, but they did so consistently and many of them had coaching careers spanning 40+ years – which is incredible.

As we prepare for the Sweet Sixteen, which is set for a March 24th and 25th tip off (25th and 26th for women’s basketball), there’s no better time to reminisce about some of the winningest college basketball coaches of all-time – some of whom are coaching in this year’s tournament.

RELATED: The 16 Biggest Upsets of March Madness So Far

Who Are the Winningest College Basketball Coaches?

Over the past 120+ years of college basketball history, we’ve seen plenty of head coaches attempt to build a dynasty at their respective schools. While it’s something that doesn’t happen often, there are a select few head coaches that have consistently led their team to success.

Don’t worry, we’re going to share with you the 20 winningest college basketball coaches of all-time below!

Jim Foster spent 40 years behind the bench, notching a career 903-347 (.722) as the women’s basketball coach at Saint Joseph’s, Vanderbilt, Ohio State, and Chattanooga. He’s a four-time Big Ten Coach of the Year and the 2003 USA Basketball Developmental Coach of the Year.

Bob Huggins has spent over 40 years behind the bench, accumulating a 916-399 (.697) as head coach of Walsh, Akron, Cincinnati, Kansas State, and West Virginia (currently). He’s one of just a few coaches to win at least 300 games at two different schools – WVU and Cincinnati.

Larry Holley spent over 50 years as the women’s head coach at Central Methodist, Northwest Missouri State, and William Jewell. He notched a 919-579 career record as head coach with 832 of those wins coming at William Jewell between 1979 and 2019 when he retired from the game.

Jim Calhoun spent over 44 years as head coach of Northeastern, Connecticut (UCONN), and most recently Saint Joseph (DIII). During his time as head coach, Calhoun has accumulated an impressive 920-397 record, including 625 wins at UCONN and 248 wins at Northeastern.

Calhoun led Northeastern to six NCAA Tournament appearances in his final seven years with the team after missing the dance in his first seven years. With UCONN, he won one NIT Championship and three NCAA Championships – including eight seasons with at least 30 wins.

Don Meyer spent 39 years behind the bench as head coach of Hamline, Lipscomb, and most recently Northern State. He retired in 2010 with a 923-34 record as a men’s basketball coach. He won the NAIA Championship in 1986, which was his first year as head coach of Lipscomb.

Meyer was known for his three rules that he demanded his players follow – everyone takes notes, everyone says ‘please’ and ‘thank you,’ and everyone picks up trash. In 2010, he was awarded the Coach Wooden ‘Keys to Life’ Award and the John Bunn Award for his excellence.

Muffet McGraw spent 38 years as head coach of the Lehigh and Notre Dame women’s basketball teams. She retired in 2020 with a head coaching record of 936-293 (.762). She built Notre Dame into a collegiate powerhouse that won two titles and were runner-ups five times.

McGraw began her career with an 88-41 record with Lehigh over five seasons. She started coaching Notre Dame in 1987 and dominated the Midwestern Collegiate Conference for the next seven years. Since joining the Big East and recently the ACC, Notre Dame has been a force.

Glenn Robinson joined the Franklin and Marshall men’s basketball team in 1968 and served as an assistant for the next three years. In 1971, he was promoted to head coach and he held the position for 48 years until his eventual retirement in 2019. He has the most wins in DIII history.

Robinson retired with a head coaching record of 967-360 (.729). He led his team to more than 20 wins in 28 different seasons, including 10 consecutive years between 1986 and 1996. Under his leadership, Franklin and Marshall made 23 tournament appearances and five Final Fours.

Jim Boeheim is currently the head coach of the Syracuse Orange men’s basketball team and has held that position since 1976 when he made his head coach debut. The Orange found immediate success under Boeheim, appearing in four-straight tourneys to start his career.

Boeheim has accumulated a 998-426 (.701) record with Syracuse, which doesn’t include the 101 wins he was forced to vacate as a result of a scandal (otherwise, he’d be much higher on this list). Under his leadership, Syracuse won the 2003 NCAA Tournament as a No. 3 seed.

Dave Holmquist played for Biola University between 1972 and 1974, immediately pursuing a career as a coach with Fresno Pacific. In 1978, he returned to Biola as co-head coach until 1988 when he became sole head coach. He’s the first head coach on this list with over 1,000 wins.

Holmquist led Fresno Pacific to a 36-43 record over three seasons before joining Biola. The team won 26 games in his second season and had an impeccable 39-1 season in 1981-82. Biola won more than 20 games in 29 different seasons and more than 30 games five times.

Hatchell led Francis Marion to an AIAW Division II Championship in 1981 and a 36-2 record in 1985 when they won the NAIA Championship. She joined UNC in 1986 and led them to 23 NCAA tourney appearances. The Tar Heels won the NCAA title in 1993 under Hatchell.

Danny Miles was a three-sport athlete at Southern Oregon, playing quarterback, shortstop, and point guard. By 1970, he was an assistant football, baseball, and basketball coach for Oregon Institute of Technology, also known as Oregon Tech. Some might say he loves sports a little.

Miles became the head men’s basketball coach for Oregon Tech in 1971 and remained in that position for the next 45 years, despite originally wanting to pursue a DI coaching career in football. He went on to lead Oregon Tech to a 1,040-437 record and three NAIA Division II titles.

C. Vivian Stringer became the first African American college basketball coach to win 1,000 games in 2018. She has spent the past 50 years as a head women’s basketball coach for Cheyney State, Iowa, and Rutgers (currently). She has a 1,055-426 (.712) career record.

Pat Summitt played basketball for the University of Tennessee at Martin between 1970 and 1974. She became a graduate assistant for the Tennessee Lady Vols in 1974 and became the head coach that same year when the former one suddenly quit, sparking a legendary career.

In his 52 years as a head coach at McK, Statham led the Bearcats to a 1,122-513 (.686) record and 15 NAIA tournament appearances. His team averaged nearly 23 wins per season and achieved more than 20 wins a total of 35 times. They played well and they did it consistently.

Herb Magee, famously known as the Shot Doctor, spent 54 seasons as the head men’s basketball coach at Thomas Jefferson University between 1967 and 2022. He announced his retirement earlier this month after leading his Rams to a 1,144-450 (.718) career record.

In just his third season as head coach, Magee’s Rams were named 1970 Division II Champions after going 29-2 on the year. While they haven’t won it since, they’ve won five CACC Tournaments since 2008 and made it to the Division II Regional Final a total of nine times.

Tara VanDerveer began her college head coaching career with Idaho and Ohio State between 1978 and 1985. During that time, she had a 152-51 record. VanDerveer was named the head women’s basketball head coach at Stanford in 1985 and has held that position ever since.

VanDerveer has led the Cardinal to a 1,003-207 record since 1985, bringing her career coaching record to 1,155-258 (.817). Stanford has won three National Championships under her control and are currently the reigning champions. They play in the Sweet Sixteen on March 25th.

2022 Marks the End of a Legendary Career for Coach K

When Mike Krzyzewski retires at the end of this season, he’ll retire atop the winningest college basketball coaches of all-time. Despite a disappointing season last year that saw Duke left out of the tournament, he has his team in a prime position for one last run at a national title.

The Duke Blue Devils entered the 2022 March Madness tournament as a No. 2 seed after finishing the regular season 28-6. They defeated No. 15 Cal State Fullerton in the First Round and No. 7 Michigan State (coached by another legend in Tom Izzo) in the Second Round.

YOU MAY ALSO LIKE: Best March Madness Memes This Year

The Blue Devils are now matched up against No. 3 Texas Tech on Thursday, March 24th as Duke continues their run in Coach K’s final tourney appearance before retirement. It won’t be an easy game, especially against one of the best defenses in college basketball, but it’s possible.