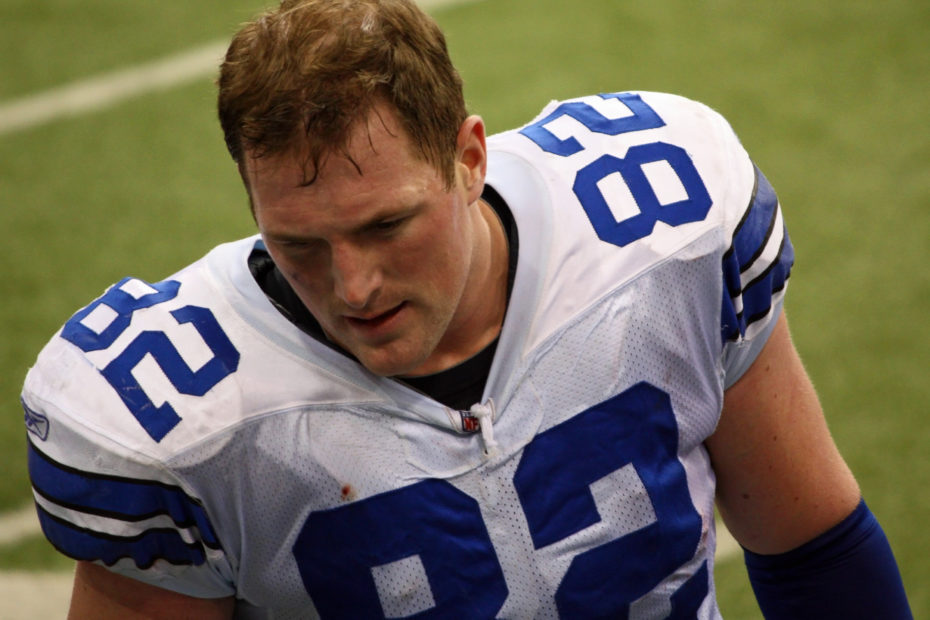 Tight ends are asked to do a lot on the football field, but the best tight ends of all-time took that statement to an entirely new level. They went above and beyond what their coaches expected from them and achieved greatness at the highest level. They made a complex game look easy.

Having a quality tight end on your roster can do a lot for your team. They’re big enough to line up on the line of scrimmage and block like an offensive lineman, but they also have the athleticism and hands to act as a reliable option in the passing game. They’re versatile and adaptable.

Who Are the Best Tight Ends of All-Time?

By now, there should be several tight ends floating around in your head that you would consider as the best tight ends of all-time. Some of the names are obvious and come without debate, but other names might strike some doubt among some fans. It all depends on who you’re asking.

For us, we’re going to do our best to take an unbiased approach to ranking the best tight ends of all-time. We’re going to look at several factors, including their statistics and production, their longevity in the NFL, their ability to block, and how much they contributed to wins for their team.

At the end of the day, the tight ends mentioned below were some of the best to ever play. Whether you cheered for them or not, there’s no denying their talent and you can’t help but tip your hat to their achievements – even if they were a thorn in the behind of your favorite team.

George Kittle was drafted by the San Francisco 49ers in the fifth round of the 2017 NFL Draft. He has only been in the league for five years, but has already established himself as one of the best tight ends of all-time. He’s a three-time Pro Bowler and one-time All-Pro, but the best is yet to come.

Zach Ertz was drafted by the Philadelphia Eagles in the second round of the 2013 NFL Draft. He had a career year in 2018 with 116 receptions, 1,163 yards, and 8 touchdowns. Although he hasn’t performed that well since, he has reinvented himself since being traded to the Cardinals.

Before Keith Jackson embarked on a legendary broadcasting career in the NFL, he was one of the best tight ends in the league. He was the Philadelphia Eagles’ 13th overall selection in 1988 and had at least 500 yards in eight of his nine seasons. He had a career-high 10 touchdowns in his final season.

Todd Christensen was drafted by the Dallas Cowboys in the second round of the 1978 draft. He started as a fullback, but eventually made the move to tight end and it was well-worth it. He had at least 80 catches in four straight seasons, including three seasons with more than 1,000 yards and a career-high 12 touchdowns in 1983.

Ben Coates was drafted by the New England Patriots in the fifth round of the 1991 draft. He had a breakout year in 1993 and recorded his first 1,000-yard season in 1994 – he also had 96 catches and 7 touchdowns. He had at least 50 receptions, 650 yards, and 6 touchdowns in six straight seasons.

Jeremy Shockey was drafted by the New York Giants with the 14th overall selection in the 2002 NFL Draft. He was as consistent and reliable as they come, recording at least 40 receptions and 400 yards in each of his first nine seasons in the NFL. He had a career-high 74 receptions and 894 yards his rookie season.

Dallas Clark was the 24th overall pick by the Indianapolis Colts in 2003. He enjoyed his best years from 2007-2009, recording 235 receptions, 2,570 yards, and 27 touchdowns over that three-year span. He likely would’ve continued that impressive run if it weren’t for an injury in 2010.

Heath Miller was drafted by the Pittsburgh Steelers with the 30th overall pick in 2005. He immediately became one of Ben Roethlisberger’s favorite targets and remained that way throughout his entire 11-year career. His career-highs in a season were 76 catches, 816 yards, and 8 touchdowns.

Vernon Davis was the sixth overall pick by the San Francisco 49ers in 2006. He was a beast of a tight end that recorded 13 touchdowns in two different seasons. His best season came in 2009 when he put up 78 catches, 965 yards, and 13 touchdowns. He was a two-time Pro Bowler and one-time Super Bowl champ.

Russ Francis was the 16th overall pick by the New England Patriots in 1975. He spent the next six seasons with New England before retiring in 1981. He returned in 1982 and played 5.5 seasons with the 49ers before finishing his career with the Patriots. He never got a lot of receptions or targets, but he racked up yards and touchdowns.

Dave Casper was a second round draft choice by the Oakland Raiders in 1974. He didn’t receive a lot of opportunity in his first two seasons, but was one of the best tight ends in the NFL over the next 7 seasons. He had a career-high 10 touchdowns in 1976 and a career-high 62 catches and 852 yards in 1978.

Greg Olsen was drafted by the Chicago Bears with the 31st overall pick in 2007. He had an impressive four-year stint with them, putting up 194 catches, 1,981 yards, and 20 touchdowns. He then spent nine seasons in Carolina, where he put up 524 catches, 6,463 yards, and 39 touchdowns. He was a three-time Pro Bowler.

Charlie Sanders was drafted by the Detroit Lions in the third round of the 1968 NFL Draft. He spent his entire 10-year career with the team and had at least 400 yards in nine of those seasons – including a career-high 656 yards in 1969. He was a seven-time Pro Bowler and three-time All-Pro en route to being inducted into the Hall of Fame.

Travis Kelce has emerged as the greatest tight end of his generation. He was drafted by the Kansas City Chiefs in the third round of the 2013 draft. He has recorded more than 100 catches in two seasons, double-digit touchdowns in two seasons, and more than 1,000 yards in six straight seasons.

Mike Ditka was drafted by the Chicago Bears with the fifth overall pick in 1961. He recorded 1,076 yards and 12 touchdowns in his rookie season, the most of any rookie tight end in NFL history. In his first four years in the NFL, he recorded an impressive 248 receptions, 3,671 yards, and 30 touchdowns.

Ozzie Newsome was drafted by the Cleveland Browns with the 23rd overall pick in the 1978 draft. He made an immediate impact as a rookie and scored nine touchdowns in his second season. He recorded his first 1,000-yard season in 1981 and did it again in 1984 – a year that saw him put up 89 catches for the second straight season.

John Mackey was a second round draft choice of the Baltimore Colts in 1963. He spent the next nine seasons with the team, recording at least 400 yards in eight of those seasons. In the three seasons that he recorded above 700 yards, he also recorded seven or more touchdowns – including a career-high nine touchdowns in 1966.

Shannon Sharpe was drafted by the Denver Broncos in the seventh round of the 1990 draft. His role continued to grow through his first two seasons and enjoyed a breakout year in 1992. He came five yards short of 1,000 yards in 1993, but eventually achieved that milestone three times in his career. He also had two seasons with double-digit touchdowns.

Jason Witten was everything you could’ve asked for in a tight end. During his 17-year career, Witten only missed one game and set a record among tight ends for making 179 consecutive starts. He had a career-high 110 receptions in 2012, amassed 1,000 yards in four seasons, and had over 100 targets in nine different seasons.

Kellen Winslow was drafted 13th overall by the San Diego Chargers in 1979. While he only played nine seasons in the NFL, he made the most of his opportunities and finished with 88+ receptions, 1,000+ yards, and 8+ touchdowns in three of his first five seasons. He continued to be productive for the next four years before retiring due to injury.

Antonio Gates is the only tight end on this list that went undrafted, doing so in 2003. He signed with the San Diego Chargers and had a decent rookie season before breaking out as a star in 2004 with 81 catches, 964 yards, and 13 touchdowns. He had double-digit touchdowns in four seasons, 1,100+ yards in two seasons, and 100+ targets in six seasons.

Rob Gronkowski was a second round draft pick of the New England Patriots in 2010 and became one of Tom Brady’s favorite targets throughout his career. He’s a touchdown machine, recording 10+ touchdowns in five of his first six seasons. He also amassed 1,000 yards four times, despite missing a lot of time due to injury.

Tony Gonzalez was drafted by the Kansas City Chiefs with the 13th overall pick in 1997. He spent the first 12 years of his career with the team – amassing 1,000 yards four times, 10+ touchdowns three times, and a career-high 102 receptions in 2004. He then enjoyed an impressive five-year stint with the Atlanta Falcons before retiring.

Who Are the Best Tight Ends Right Now?

Every single year we see a new class of tight ends enter the NFL and try to write their name among the best tight ends of all-time. Some of these young tight ends will go on to have successful careers, while some of them will quickly fade away as they become irrelevant.

Today, there are several tight ends that have either already found themselves on the list of best tight ends of all-time or are on their way to that achievement. They’re a nightmare for opposing defenses and consistently make their quarterback better – as well as their team as a whole.

YOU MAY ALSO LIKE: 20 Best NFL Player Names of All-Time