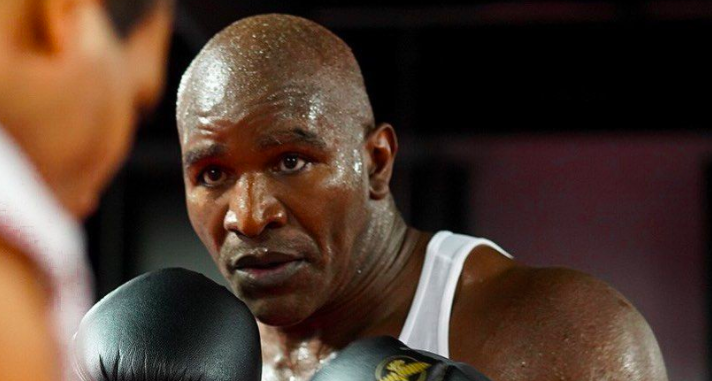 RELATED: Did You Miss Watching Mike Tyson In the Ring? Well, He’s Back and Looks Like He Hasn’t Missed a Step

Of course, Holyfield vs Tyson fights were classic and memorable for many. Holyfield won both fights with Tyson getting disqualified in the second fight for biting off a piece of Holyfield’s right ear per BoxRec.

According to BoxRec: “In a post-fight interview with Jim Gray, Tyson claimed that the headbutts were intentional by Holyfield, and the bites were retaliation…On June 30, in a televised statement, Tyson apologized. “I just snapped,” he said. “I couldn’t tell you why I acted exactly as I did.”

According to ESPN, “nearly 25 years after beating him twice to win and retain the WBA heavyweight title, Evander Holyfield wants another piece of Mike Tyson.”

According to Boxing Junkie, here’s what Holyfield said in a reported statement (as mentioned by Reuters):

“Roy Jones was a good local opponent for Mike,” Holyfield said per Boxing Junkie. “But a fight with me would be a global event and the only fight that anyone wants to see is a fight between us. There is absolutely no reason why we shouldn’t make it happen…No more excuses. This is the fight that must happen for both our legacies. Saturday night you said you were ready to fight me, so sign the contract and get in the ring, Tyson. The world is waiting and it’s on you now. I’m ready.”

Tyson just got out of the ring, fighting Roy Jones Jr on Saturday which resulted in a draw.

Tyson will probably (and understandbly) need some time to recover but if this fight happens, I’m sure there will be lots of people ready to watch it.