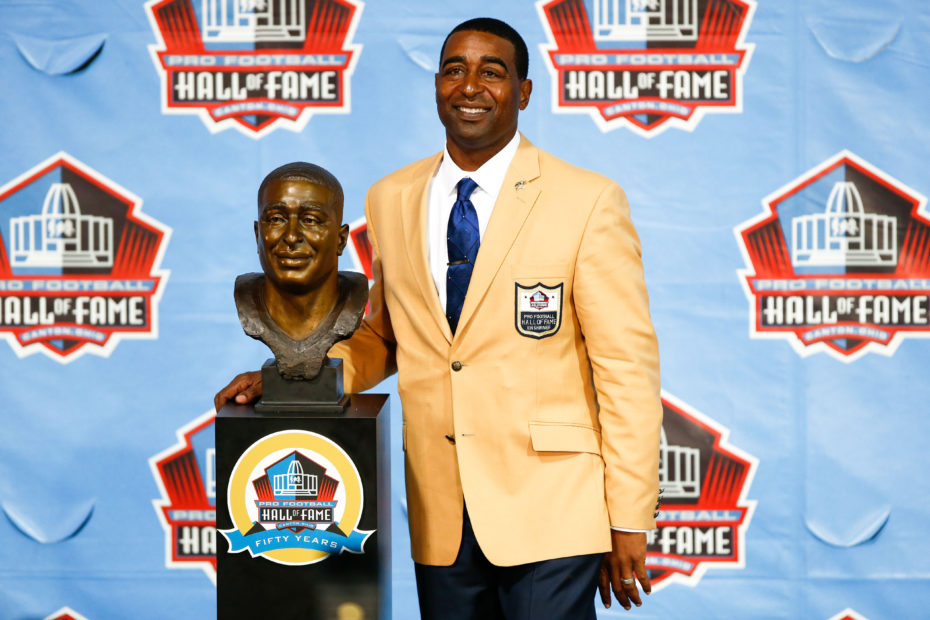 Throughout history, some of the greatest wide receivers of all-time have been some of the most popular players on the football field. They’re known for their Spiderman-like hands, electric personalities, overwhelming confidence, and immense swag. They’ve got that edge that fans can’t seem to get enough of.

In today’s game, a wide receiver’s success is largely dependent on their connection and chemistry with the quarterback throwing them the ball. Just look at the success that Josh Allen and Stefon Diggs had in their first season together — they clicked right away and it showed.

With that said, some wide receivers are more alpha than others. If we’ve learned anything throughout the history of the NFL, it’s that some receivers are simply better than the defensive backs they match up with — no matter who’s throwing them the ball or who they lined up across.

Those receivers are the ones that define the position. They define what it means to be a great wide receiver and they exemplify what every young receiver hopes to accomplish as they embark on their long career. If it wasn’t for them, receivers would have no one to look up to.

While there have been plenty of greats to make their mark on the football field, there are some that reign supreme — the greatest wide receivers of all time. There’s no debate that these receivers have had some of the greatest careers and we’re going to share them with you below!

Counting Down the 10 Greatest Wide Receivers of All-Time

YOU MAY ALSO LIKE: Serena Williams Gets Adorable Piano Lesson From 4-Year-Old Daughter

If you’re a young soul, you might not recognize the first few receivers on this list — starting with Lance Alworth. He garnered a lot of attention out of college, being chosen in 1962 by the San Francisco 49ers (NFL) in the first round and Oakland Raiders in the second round (AFL).

After the Raiders traded his rights to the San Diego Chargers, he ultimately decided to sign with the Chargers as opposed to the 49ers. He spent nine years with San Diego and two with the Dallas Cowboys, tallying 542 receptions, 10,266 yards, and 85 touchdowns over his career.

Nicknamed Bambi, Lance Alworth was the Randy Moss of his day. He was a true home-run hitter that was known for his catch-and-runs and leaping catches — two things Al Davis took advantage of on the football field. He was inducted into the Pro Football Hall of Fame in 1978.

Several years after Alworth retired, a new wide receiver took the league by storm — Steve Largent. He was originally drafted by the Houston Oilers in 1976, but they traded him to the newly-expanded Seattle Seahawks before the regular season started for an 8th round draft pick.

Steve Largent would go on to spend his entire 14-year career wearing No. 80 for the Seahawks and was a model for consistency with eight 1,000+ yard seasons. He ended his career with 819 receptions, 13,089 reception yards, and 100 receiving touchdowns in 200 games played.

At the time of his retirement in 1989, Largent held the all-time record for the most receptions, yards, and touchdowns. While those records have been passed, his legacy remains. He was inducted into the Pro Football Hall of Fame in 1995.

Well before Alworth and Largent made their marks on history, Don Hutson was the original goat at the wide receiver position. He played for the Green Bay Packers from 1935-1945 and held the all-time records for most receptions (488) and touchdowns (99) at the time of his retirement.

In fact, his 99 career touchdowns was a record that stood for over 40 years until Steve Largent (100) surpassed it in 1989. Hutson’s best season came in 1942 when he posted 74 receptions, 1,211 receiving yards, and 17 touchdowns — numbers that were unheard of back then.

Hutson might’ve played in the NFL at a time when African Americans weren’t allowed, but that doesn’t overshadow what he was able to accomplish on the football field. He was inducted into the Pro Football Hall of Fame in 1963 and will forever be remembered as one of the greatest.

Cris Carter started his career a few years before Steve Largent ended his. Carter was drafted by the Philadelphia Eagles in 1987 and played three years with the team before moving on to the Minnesota Vikings, where he spent a majority of his career — 12 seasons to be exact.

He became known as a touchdown-scoring machine in his 16 years in the NFL, totaling 130 receiving touchdowns — a number that ranked second all-time when he retired and ranks fourth to this day. In fact, his first NFL reception in 1987 was taken to the house for a 22-yard score.

Carter also tallied 1,101 receptions (sixth all-time) and 13,899 yards (13th all-time). He recorded eight straight 1,000+ yard seasons with Minnesota, five of which ended with 10+ touchdowns. He was inducted into the Pro Football Hall of Fame in 2013, cementing his legacy in this sport.

It’s rare to find a wide receiver that’s built like Calvin “Megatron” Johnson, even in today’s game. He was a 6’5’’, 237-pound behemoth of a football player and was a matchup nightmare for any defensive back that got in his way. Watching him play was something every fan admired.

Johnson was drafted by the Detroit Lions in 2007. Despite having an incredible rookie season, he didn’t truly put the league on notice until 2008 when he tallied 78 catches, 1,331 yards, and 12 touchdowns. After taking a step back in 2009, he tallied six-straight 1,000+ yard seasons.

He abruptly ended his career in 2015 after just nine seasons in the league, but still managed to post 731 receptions, 11,619 yards, and 83 touchdowns over his career. He still holds the single-season receiving yards record at 1,964 yards and was inducted into the Hall of Fame in 2021.

Marvin Harrison started his career with the Indianapolis Colts in 1996, the same team he represented throughout his incredible 13-year career. He was as dynamic, humble, consistent, and articulate as they come, epitomizing what it meant to be a wide receiver in the NFL.

He quickly made a name for himself as the Colts’ No. 1 receiver, but it wasn’t until 1998 — the year the Colts drafted Peyton Manning — that his career started to take a turn for the better. In their second year together, Harrison posted 115 catches, 1,663 yards, and 12 touchdowns.

That kicked off a string of eight straight 1,000+ yard seasons (five of which were above 1,300 yards) and 10+ touchdowns. Over that span, he only missed two regular-season games and was as durable as they get. His 143-reception season in 2002 is the second-most all-time.

Terrell Owens is one of the most entertaining wide receivers of all time, both on-the-field and off-the-field. He was never scared to talk his talk, but he always made sure to walk the walk when it came time. He will always be remembered for his exciting celebrations and antics.

He played a majority of his career with the San Francisco 49ers before spending his later years with the Philadelphia Eagles, Dallas Cowboys, Buffalo Bills, and Cincinnati Bengals. He tallied nine 1,000+ yard seasons over his 15-year career, eight of which ended with 10+ touchdowns.

Throughout history, there have been several players that have stood the test of time. While Tom Brady tops that list, you can’t forget about the legendary Larry Fitzgerald. Drafted by the Arizona Cardinals with the third overall pick in 2004, he has played 17 years with the same team since.

Although it doesn’t look like he’ll be suiting up in the 2021 season, it’s clear that he isn’t ready to retire. With that said, there’s a good chance we see him in the future as the only active player on this list. Eventually, when he decides to hang his cleats, we’ll see him in the Hall of Fame.

It didn’t take long for Randy Moss to prove his worth in the NFL. Drafted by the Minnesota Vikings in 1998, he finished his rookie year with 69 receptions, 1,313 yards, and 17 touchdowns — the most receiving touchdowns ever by a rookie. From that point on, he was dominant.

His greatest season came in 2007, his first with the Patriots, where he recorded an all-time best 23 touchdowns with Tom Brady. His 156 career touchdowns ranks second all-time and 15,292 career yards ranks fourth all-time. He was inducted into the Pro Football Hall of Fame in 2018.

Jerry Rice started his NFL career in 1985 after being drafted in the first round by the San Francisco 49ers. He went on to play 16 seasons for the 49ers before spending three years with the Oakland Raiders and one with the Seattle Seahawks. He was a dominant force for 20 years.

What Does the Future Have In-Store?

Being named one of the greatest wide receivers of all-time is a massive accomplishment for any receiver and one that isn’t taken lightly. It’s something every young receiver dreams of and is one of the main aspirations that give them the motivation to work their tails off each year.

It’s not an easy list to join and it’s unclear who will be the next to crack the list — let alone who they’ll replace. Players like Michael Thomas, Mike Evans, Antonio Brown, Julio Jones, DeAndre Hopkins, and Stefon Diggs have had incredible careers, but still have a long ways to go.

Who knows, it could be you! There was a time when Jerry Rice, Randy Moss, Larry Fitzgerald, and all the others on this list were young kids with a dream. Through hard work, passion, dedication, and a strong support system, they were able to make that dream come true — and so can you!