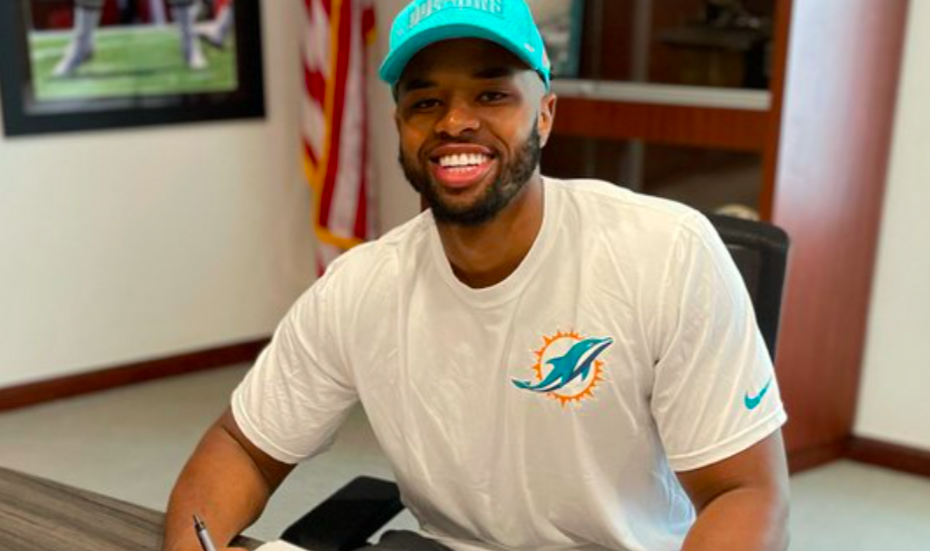 Jibri Blount balled out in college at North Carolina Central. The forward averaged 19.1 points and 9.3 rebounds his senior year (2019-20). Those numbers are good enough to potentially translate to professional ball.

You may be thinking, yeah, the NBA, G-League, pro basketball overseas, or some type of pro hoops league.

RELATED: Tua Tagovailoa Makes NFL Debut: ‘Most Guys Don’t Have To Go Through What Tua Went Through’

Well, in this case, Blount is playing professionally. Just not pro basketball.

Blount recently signed as a tight end with the Miami Dolphins after the team announced they’ve signed the former college basketball player.

Blunt then continued on to say: “Thank you @miamidolphins for the opportunity super excited to get to work. #FinsUp #UndraftedFreeAgent #GodsPlan #RetiredHooper,” Blount said in his Instagram post announcing the signing. “Thank you, to everyone who has supported me and me through my Basketball career excited for this new journey and a special thanks to my amazing team @kelvin.d.coker @ffasports @offcourtmgmt @jcole823 @aretesportsagency”.

As you saw, Blount bluntly called himself a retired hooper.

Because now he is an NFL tight end.

How about that for a nice job after retirement! Moving from the sport he played in college to playing professional football, from forward to tight end, is incredible.

In the Dolphins announcement, the team mentioned “Blount…earned MEAC Player of the Year honors as a senior in 2019-20. Blount started 31 games that season, leading the conference in minutes per game (36.8) and steals per game (2.2). He was third in the MEAC in scoring (19.2 points per game), third in rebounding (9.5) and fifth in field goal percentage (52.5).”

Dolphins quarterback Tua Tagovailoa is being surrounded with a talented group of wideouts and tight ends, including newcomer Blount now. The team drafted Alabama wide receiver Jaylen Waddle with the sixth pick in the draft and Boston College tight end Hunter Long with the 81st pick.

With all these new acquisitions in the receiving and tight end room, this could be a dangerous Dolphins passing game for defenses this season.

And who’s calling it now. If Blount gets that first touchdown, do you think he’ll dunk the football through the goal posts as a celebration?

Either way, you got to be happy for Jibri and his family. And football runs in the Blount family.

Per NBC Sports Pro Football Talk’s Charean Williams, “Blount is the son of Pro Football Hall of Fame cornerback Mel Blount…Jibri’s older brother, Akil, also got his chance with the Dolphins as a free agent after playing linebacker at Florida A&M. The youngest brother, Khalid, plays on the North Carolina Central football team.”

“Football is in his DNA”

“My heart is smiling,” Moton said in the retweet. “One of the most incredible people I’ve ever coached. Football is in his DNA so it’s no surprise. Go be GREAT Champ. Love u boss! #WeAreNCCU”.