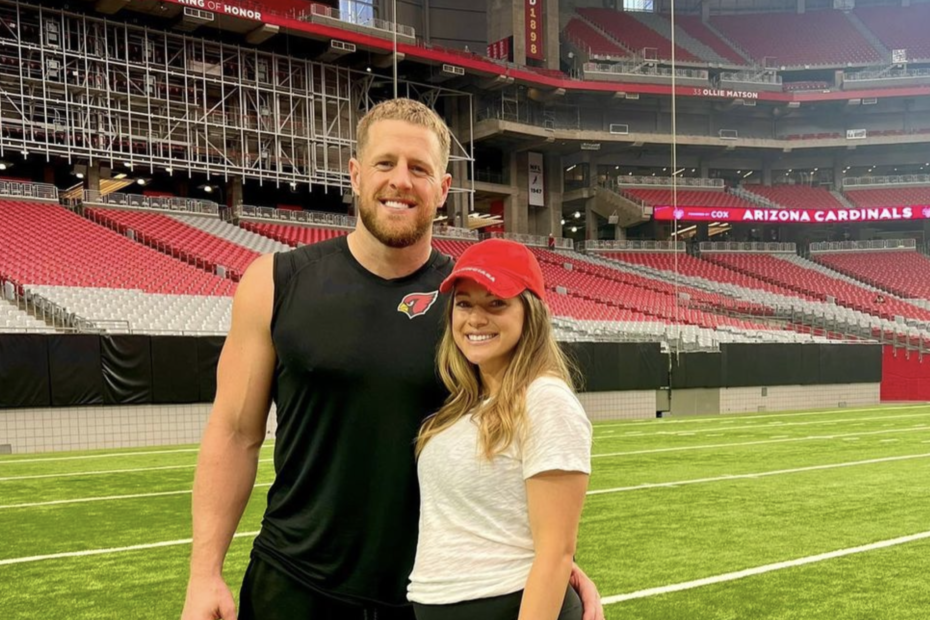 At the end of October, Arizona Cardinals defensive end JJ Watt was happy to announce he and his wife welcomed their first child into the world.

Taking to social media, the NFL played posed next to his wife, Kealia, in the hospital room. Watt shared across multiple social media platforms that his son, named Koa James, was brought into the world on October 23rd, 2022. “Love and happiness have reached heights we never even knew existed,” the father said on Twitter and Instagram.

Despite celebrating the birth of his son, the Arizona Cardinals player was quick to return to the NFL field, not taking any time off. However, while playing the Minnesota Vikings, the 33-year-old first-time dad made sure to show off his specially-made cleats that honored the birth of his son.

On Twitter, the athlete shared custom cleats that were decorated in baby memorabilia, including building blocks that spell out his son’s name and Koa’s time of birth. Attaching a picture of the unique gear, Watt captioned the photo “Purpose”, clearly adapting to his new role as a father.

Baby Koa was also quick to celebrate his father’s game against the Minnesota Vikings. On social media, Kealia, who is a former professional soccer player, showed a photo of the newborn sporting an Arizona jersey with the caption, “first game day.”

The first-time parents initially married in 2020 and announced that they were expecting their first child over the summer. At the time of the announcement, Watt shared the simple phrase to convey how much he was looking forward to becoming a father: “could not be more excited,” the NFL star expressed on Instagram.

RELATED: Jane Fonda and Lily Tomlin’s ’80 For Brady’ is Here and it’s Hilarious

Since June, the pair has been very vocal about their excitement, Kealia Watt even sharing her plans to preserve Koa’s stem cells for scientific research.

“Getting ready for my baby has had so many decisions behind it. One thing for certain though is taking the steps to invest in the future of our family’s health,” the soccer player said prior to her child’s birth. “Newborn stem cells from cord blood can already help treat over 80 conditions today, like certain cancers and sickle cell anemia.”

“Knowing this exists brings so much peace of mind which is why I’ve teamed up with CBR to give away 1 cord blood and cord tissue collection kit, processing, and 1 year of storage for free,” Kealia continued.