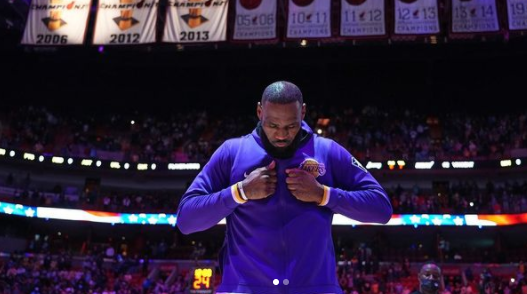 How Does LeBron James Feel Amid Disappointing Season? ‘I Feel Like Poop…’

LeBron James and the Los Angeles Lakers aren’t having the type of season that the franchise is used to or expected. Despite a series of offseason moves that brought the likes of Russell Westbrook and Carmelo Anthony to town, the team is 27-34 with the season winding down.

The team ended 2021 with a win on December 31st and won their next three games into the new year, but are just 6-15 since and are currently on a three-game losing streak. They most recently suffered a disappointing 104-109 loss to the Dallas Mavericks on Tuesday night.

The loss comes after an even more disappointing and embarrassing 123-95 loss to the New Orleans Pelicans on Sunday, which came on the heels of a 105-102 loss to the Los Angeles Clippers on Friday. LeBron James got candid with reporters after the team’s third straight loss.

“Until you stomp me out, cut my head off, bury me 12 feet under, then I got a chance. So, that’s my confidence. Obviously, at the end of the day, we’ve got to come in here and win ball games and we got to play better,” James told reporters. “I hate losing. I feel like poop right now.”

James is no stranger to overcoming and defying the odds. Let’s not forget, this is the man that helped lead the Cleveland Cavaliers to a title despite being down 3-1 against one of the best teams of all time. “But as long as we got more games to play, we still have a chance,” he added.

Can LeBron James Help the Lakers Turn Things Around?

Time is running out for LeBron James and the Los Angeles Lakers to figure things out amid a disappointing season. At just 27-34 with 21 games left, the Lakers are in ninth place in the Western Conference with the Pelicans and Trail Blazers just two games behind them.

Not only do they have Portland and New Orleans right behind them, but they are 4.5 games behind the Clippers, who are currently in eighth place and are nine games away from avoiding the play-in tournament. If they don’t start winning consistently, they could fall out of contention.

Despite LeBron James scoring 28.9 points per game (third in the league) and having five potential Hall of Famers on the roster, injuries have riddled the Lakers’ season. James has only played in 44 games and Anthony Davis has only played in 37 games (of a possible 61 games).

Since Davis is still weeks away from a possible return, the Lakers are going to need to exert every ounce of fight that they have if they want to keep their playoff chances alive. They need James to stay healthy, Westbrook to play smart, and role players to step up in a very big way.

It’s possible, especially for a team led by one of the greatest of all time, but it won’t be easy. He has only missed the playoffs three times in his career, which has spanned 18 seasons (not including this one). If the season ended today, they would be in the play-in tournament.