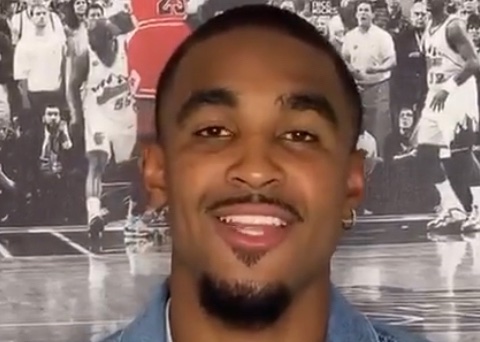 Eagles QB Jalen Hurts, 23, Reflects on Railing Collapse and Wants to Ensure Safety For the Future

Following a railing collapse at FedEx Field, Philadelphia Eagles quarterback Jalen Hurts wrote a detailed letter to the NFL and Washington Football Team asking what their initiative is to keep fans safe in the future.

During Sunday night’s Philadelphia Eagles game against Washington Football Team, a group of fans fell 6-8 feet from a railing that collapsed at the Maryland stadium, just as Hurts was exiting the game following his team’s win.

“I tried to handle the situation with a lot of poise and show compassion for the people that fell down, really, but I know it could have been so much worse,” the 23-year-old athlete wrote on Tuesday, after having some time to process the event.

“It kind of didn’t hit me until after the fact, having some time to reflect on it and think about it. I just wanted to see what could be done to make sure it doesn’t happen again. That’s all I really care about,” he continued.

Jalen Hurts questions what the NFL will do to provide fans with proper safety measurements.

Hurts went on to question what the league will do about the incident and how they will proceed with improved safety measurements in the future.

“I understand the severity of what happened and am extremely concerned for the well-being of the fans and media,” the quarterback said. He went on to compose, “As a result, I would like to know what safeguards the NFL and the Washington Football Team are implementing to prevent this from ever occurring in the future.”

Although no one was injured, Hurts still felt it was essential to express to the league the injuries that could have happened and they acknowledged his pursuits via a statement. As of now, few specifics have been expressed by the league or the team in regards to an updated safety procedure.

“We appreciate Jalen’s concerns and have been reviewing the incident with the Washington Football Team,” Brian McCarthy, NFL communications vice president, stated. WFT also came forward with their own statement and expressed, “To our knowledge, everyone involved was offered on-site medical evaluation and left the stadium of their own accord.”

Despite this claim, many of those who suffered injuries denied that they were offered medical care after the incident. According to ESPN, one victim reported, “The only thing the staff said to us was to get the F off the field.”