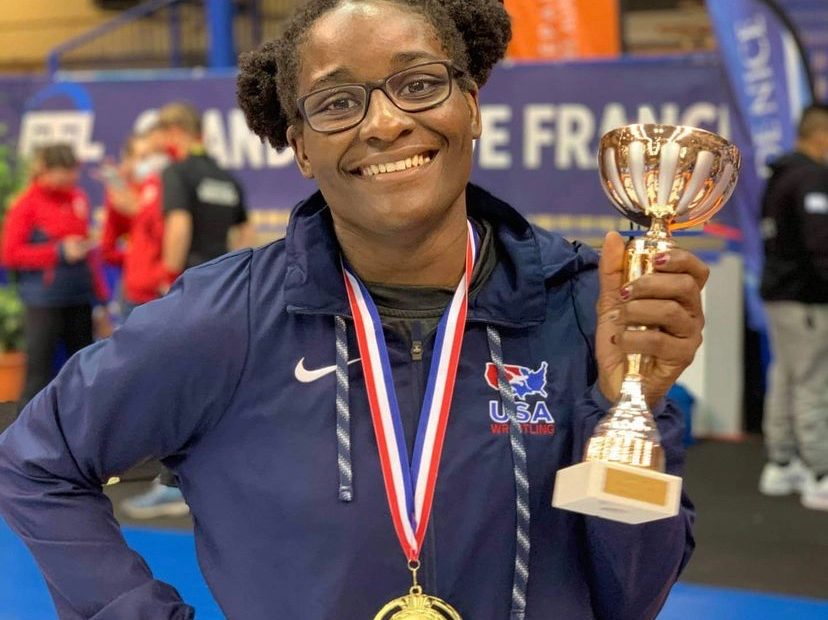 Tamyra Mensah-Stock made history on Tuesday when she became the first-ever African-American freestyle wrestler to take home a gold medal on women’s Team USA. Additionally, she was the second woman to earn a gold medal on the United States women’s wrestling team.

Seen with the American flag wrapped around her shoulders, the Texas native was emotional after her big win. According to Team USA, Mensah-Stock also shared that she never lost faith in her abilities. “I knew I could do it,” she said. “I knew it would be hard. I prayed I could do it. In my wildest dreams, I knew.”

The road to this year’s Olympics was particularly difficult because this athlete had lingering fears about the 2016 Olympic outcomes. Although she qualified for the 2016 Rio Games, Mensah-Stock was forced to sit that year out because Team USA had not yet made a weight class that she fit in for the competition. Thankfully, the 2020 Tokyo Games did not have that issue and the wrestler could fulfill her dreams.

“It feels amazing. I love representing the U.S,” she exclaimed ecstatically. “I freaking love living there, I love it, and I’m so happy I get to represent U-S-A!”

RELATED: How Simone Biles, 24, Changed the World of Gymnastics Using a Slice of Pizza

Going up against Nigeria’s Blessing Oborududu, the American wrestler completed the match with an astonishing  4-1 victory over Oborududu. Although surely proud of herself, Mensah-Stock explained that this is a victory that would have been extra special to share with her father. Her father was the unfortunate victim of a fatal car crash that occurred as he was coming home from one of her high school wrestling meets.

“He would have been the loudest one here,” said Mensah-Stock. She also explained that it was a slightly poetic occurrence that she won over Oborududu because her father was from Ghana and Nigeria is the rival country of Ghana. The wrestler also included the heartwarming sentiments, “He would have been so proud.”

Mensah-Stock shared that a large part of what makes her gold medal so special is that it will make a generation of young girls understand that they can do whatever they put their mind to. “These young women are going to see themselves in a number of ways and they’re going to look up there and go, I can do that,” the 28-year-old wrestler stated to AP. “I can see myself.

While this win is historical, the Olympic wrestler has made it clear that she does not want to be the only woman in wrestling to bring home a medal. In fact, she hopes that she can be the one to prove to other female athletes that it is possible to pursue a dream that isn’t traditionally applied to femininity.

Furthermore, she stated, “You don’t have to be this tough ‘grrrr I’m going to be mean to you (type of person).’ I wanted to be that light.”

Not only has the wrestler showcased an amazing case of sportsmanship and dedication to what the future holds for female wrestlers, but she also plans on assisting her mother’s pursuits of a food truck. “I wanted to give my mom $30,000 so she can get a food truck. It’s her dream,” Mensah-Stock told the Guardian.

“My mom’s getting her food truck! She’s going to have a little cooking business. She can cook really, really, really well – barbecue. I don’t eat it because I’m a pescatarian now.”