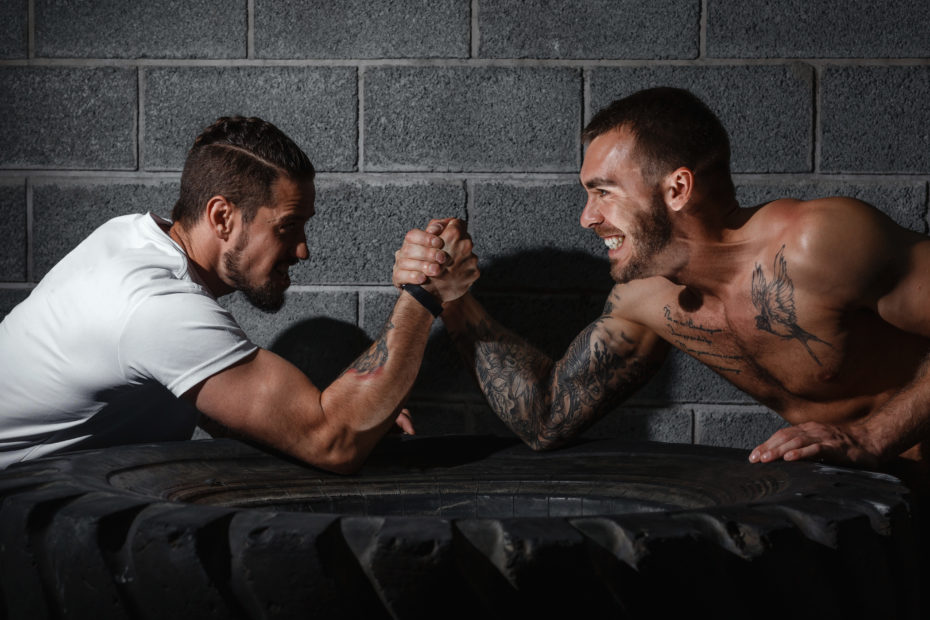 Arm Wrestling: Who’s the Best At It?

Let’s talk about arm wrestling – you know, that thing we all used to do with our friends and siblings when we were younger. Many historians estimate that arm wrestling dates back as far as ancient Egypt, evidenced by hieroglyphics found at an ancient cemetery called Beni Hasan.

Although there’s no way of knowing how or why arm wrestling was used back then, it’s interesting to think that we’re doing the same thing to this day. Despite all the other forms of entertainment – such as boxing, the WWE, the UFC – arm wrestling still has its prominence.

Today, millions of people partake in arm wrestling for fun and thousands are known to compete professionally around the world. It might not be as popular as other sports, but it’s globally recognized and has a loyal following that help it continue to grow in popularity every year.

RELATED: What Grade Is Bronny James In & 20 Other Athlete Children Who Took After Their Parents

Who Are the Best Arm Wrestling Competitors in 2022?

Competitive arm wrestling dates back to 1952 when Bill Soberanes invented the sport in Gilardi’s saloon. What started out as a Petaluma, CA tradition turned into a global sensation thanks to Dave Devoto’s help. By 1969, they had a contract with ABC’s Wide World of Sports.

Arm wrestling experienced a lot of growth in the 1990s, despite their partnership with ABC coming to an end in the mid-1980s. Although it’s not as popular today, it’s still enjoyed by many and will likely return to prominence as people find new ways to broadcast and follow it.

Speaking of the best of the best, let’s take a look at some of the greatest arm wrestlers in the world today!

Arif Ertem is a Turkish arm wrestler out of Istanbul. He began arm wrestling in 2009 when he was introduced to the sport through several competitors at a gym he frequented. Two years later he was competing in the Junior National Championship, taking fourth place with both arms.

He has consistently improved through the years and won the men’s right 110+ kg World Armwrestling Championship in 2019 and 2021 – making him the defending back-to-back world champion. He has faced off against some of the greatest to ever do it and always holds his own.

Speaking of back-to-back World Armwrestling Championship winners, Genadi Kvikvinia is a Georgian arm wrestler that won it back in 2015 and 2016 – both of which with his right hand at 110+ kg. He continues to compete to this day and is always looking for ways to improve.

Kvikvinia weighs 304 pounds with a forearm measuring 17.72 inches and biceps measuring 20.87 inches. He is currently ranked 13th in right handed arm wrestlers, according to X Sport News. He has no problem competing against the best in the world and won’t back down.

Ivan Matyushenko is a Russian arm wrestler that’s currently ranked 13th in the world with the left arm, according to X Sport News. He started arm wrestling in 1999 and has consistently been among the best in the world for much of the 2010s – even now into the 2020s.

He’s a three-time WAF World Championship winner, while also placing in the top-three a total of nine times. He also won the 2019 EAF European Championships with both arms and has won three European titles in his career. He’s a veteran, but he still arm wrestles like a young stud.

Alizhan Muratov is a Kazakhstani arm wrestler that’s currently ranked 12th in the world with the left arm. He competed for his home country at the 2017 Arm-wrestling World Cup and was part of a 26-man team. He took first place in his competition and his team took second overall.

In 2018, Muratov was named the middleweight champion of the Arm-wrestling World Cup with the left arm. He did so by beating Patrik Berg, Zaza Okrotsvaridze, Mykhailo Opaets, Tom Holland, and Vladimir Mouorov (twice). He also placed fourth with the right arm that year.

Speaking of Kazakhstani arm wrestlers, Georgy Dzeranov is also a professional arm wrestler out of Kazakhstan. He enjoyed a great deal of success between 2016 and 2019, in which he won six World Armwrestling Federation world titles – including four consecutive with his left arm.

One of the greatest 100 kg and 110 kg arm wrestlers of all-time, Dzeranov has been attached to the sport since he was a child. He credits most of his success to his training, which largely involves free weight and strength training. He also dedicates himself to technique training.

Grigorii Liashchuk is a Russian professional arm wrestler that’s currently ranked 10th in the world with the right arm, according to X Sport News. He had a lot of success at the Zloty Tur Arm Wrestling World Cup in 2018, in which he placed third with the left and first with the right.

Kody ‘Spur’ Merritt is an American professional arm wrestler that’s currently ranked 10th in the world with the left arm, according to X Sport News. He has enjoyed a lot of success at the United States Armwrestling Federation (USAF) Unified Nationals over the past few years.

Through his career, Bresnan has enjoyed rivalries with two of the greatest to ever do it – Alexey Voyevoda and Rustam Babayev. He defeated Voyevoda in 2015, but lost to Babayev in 2018. He has won multiple world championships and national championships since turning pro.

Sergey Yurchenko is a Russian professional arm wrestler out of Primorsky Krai that currently ranks ninth in the world with the left arm, according to X Sport News. In 2015, Yurchenko placed third in the Senior Men Left +95 kg at the A1 Russian Open World Armwrestling Grand Prix.

Gasparini is a four-time World Champion and has won several European Championships in his career. He has earned the nickname ‘The Gladiator,’ prefers the toproll technique, and has a legendary rivalry with Marcio Barboza. He seems to show out against the best competition.

Artem Taynov is a Russian professional arm wrestler that’s currently ranked eighth in the world with the left arm. His career hit a bit of a rough patch in the early 2010s and was hit by a lot of injuries by 2014. He continues to fight hard and remains among the very best in the world.

Yordan Tsonev, also known as Jordan Tsonev, is a Bulgarian professional arm wrestler that’s currently ranked seventh in the world with the left arm, according to X Sport News. He has consistently performed well at the World Armwrestling Federation World Championships.

Kurdecha has done it all in the world of sports. Apart from arm wrestling, he has pursued careers in american football, swimming, weightlifting, and much more. He even once set a local record in throwing F1 grenades. He currently works for Polski Związek Motorowy in Poland.

Dave Chaffee, also known as ‘Easy Money,’ is an American professional arm wrestler that’s currently ranked fifth in the world with the right arm. Through the years, he has enjoyed several high-profile rivalries, including with Michael Todd, Devon Larratt, and Dmitry Trubin.

Chaffee stands 6’2’’ and weighs 275 pounds, according to the World Armwrestling League. He began arm wrestling in 2006 and hails from Erie, Pennsylvania – where he works as a corrections officer at the Erie County Prison. He lives a simple, routine-oriented life.

Michael Todd has enjoyed an illustrious and decorated arm wrestling career that not many can compare to. He began arm wrestling in high school thanks to his father, who introduced him to the sport. He turned pro at the turn of the century after winning his first national title in 2020.

Through his career, Todd has won 18 world titles and 34 national titles. They call him ‘The Monster, a nickname that has stuck with him as he continues to dominate the sport. He has enjoyed several high-profile rivalries, including Devon Larratt, Dmitry Trubin, and Dave Chaffee.

Kostadinov can get the job done with both arms. He has won multiple European and World championships in his career, but wants to achieve even more. At the 2019 Zloty Tur, Kostadinov won first place in both Senior Men Right and Left 105+ kg. He defeated Kurdecha at the 2020 VENDETTA United Stars.

Devon Larratt, also known as ‘No Limits,’ is a Canadian professional arm wrestler that’s currently ranked third in the world for both right and left arms, according to X Sport News. He’s a former member of the Canadian Special Forces, which helped him succeed in arm wrestling.

He began arm wrestling as a teenager and entered his first international competition in 1999. He has battled against some of the top names in arm wrestling, defeating Michael Todd, John Brzenk, Dave Chaffee, Todd Hutchings, Jerry Cadorette, and Ron Bath all in the past four years.

Vitaly Laletin is a Russian professional arm wrestler that’s currently ranked second in the world with both left and right arms, according to X Sport News. He’s a big guy, standing 6’7’’ tall and weighing 302 pounds – though his arms look smaller than most of his competitors today.

Laletin is a five-time Russian champion, seven-time European champion, and seven-time World champion. He is known as a legend in the sport and has found success with both arms – something not all arm wrestlers can do. Even today, Laletin continues to dominate the sport.

Levan Saginashvili, also known as the ‘Georgian Hulk,’ is a professional arm wrestler fighting out of Georgia. He’s the greatest arm wrestler of his generation and has dominated the sport over the past 10 years. He stands 6’4’’ and weighs 370 pounds – a behemoth of a person.

Over the past decade, Saginashvili has won seven WAF titles, six European titles, the 2017 World Cup, and the 2019 Top 8. He had an impressive 2018 with first place finishes at the EuroArm, the World Armwrestling Championship, and the Vendetta All Stars #50. He’s currently ranked No. 1 in the world with both the left and right arms.

Who Are the Best Arm Wrestlers of All-Time?

The best arm wrestlers in the world might not receive as much attention or praise as other athletes – such as those that play football (soccer). With that said, they’re still revered by fans of the sport and have a loyal following that give them a taste of that celebrity status we’re all after.

With 2022 upon us, let’s not forget about the legendary names in the arm wrestling community that helped pave the way for those listed above. Names like John Brzenk, Cleve Dean, Travis Bagent, Gary Goodridge, Andriy Pushkar, Denis Cyplenkov, and Alexey Voyevoda.

YOU MAY ALSO LIKE: 15 of the Hardest Sports to Play & Why