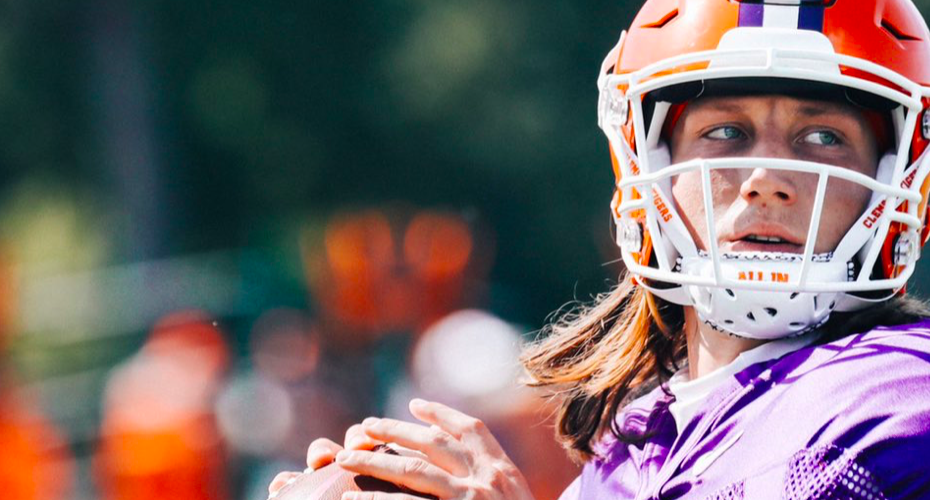 With the first pick in the 2021 NFL Draft, the Jacksonville Jaguars will select…

(If, according to pretty much every draft analyst in the world and probably yourself at home is correct) Trevor Lawrence, quarterback, Clemson University.

RELATED: Trevor Lawrence Takes to Twitter to Push for the 2020 College Football Season Not to Be Canceled

Lawrence has been the consensus guess to be the number-one overall pick in the upcoming draft at the end of this month.

The quarterback even has “thanked Jaguars fans for purchasing a wedding gift and raising more than $11,000 for him to donate to a charity of his choice. Lawrence wrote that he and his wife, Marissa, will donate $20,000 to charities in Jacksonville and that they ‘hope to be a part of your community soon'” according to ESPN’s Michael DiRocco.

Whether or not he does, in fact, end up in Jacksonville, he’s got his bride and family’s support, including his brother.

Trevor and his brother, Chase, share a special sibling bond as detailed by ESPN’s David Fleming . From the outside they may seem like complete opposites but they couldn’t be more similar.

Fleming described Trevor and Chase’s brotherhood and friendship, calling the connection they have as “magical”.

“The main difference is just vocation,” Chase said via Fleming. “Other than that, we are very similar, same sense of humor, same goofiness, same personality overall. He’s pretty creative, too, artistic even, and we’re both problem solvers and we’re both seekers. We are always seeking the truth no matter if it’s what we want to hear or don’t want to hear. And we disagree on a lot on things like faith and religion and dogma, but we agree on just as much if not more. But he’s young, so he’s still figuring things out.”

“We were concerned when they were younger that Chase and Trevor wouldn’t be close because of the age difference and because they’re just so different,” Amanda Lawrence, the brothers’ mother, said via Fleming. “But they’re closer than they’ve ever been, and that has really evolved in the last six years or so. It’s wonderful they’ve been able to merge their two worlds even more with this project.”

According to Fleming: “Chase and Trevor also have a younger sister, Olivia. After getting his driver’s license, the first time Chase drove by himself was to take Trevor to the hospital to meet their little sister, a memory that still makes Amanda tear up”.

Fleming also mentioned that “Brooke, (Chase’s wife) describes them as a pair of humble hearts.”

These humble hearts evidently give it their all both on the field and off, on the gridiron and on the canvas.

Some recent work from Chase was a collaboration with Brooke in designing Trevor’s Topps cards.

To top it all off, the NFL Draft’s first round will take place on April 29 where we’ll see if Trevor gets taken with the top pick.

In Sports Illustrated’s cover story, Michael Rosenberg mentioned “Lawrence has (confidence); even when Clemson was getting blown out by Ohio State, he expected victory…Lawrence is so mature that, even though he has yet to sign an NFL contract, it is already possible to imagine him retiring. Lawrence doesn’t mind this conversation, because it blends two things he has no use for: other people’s opinions and a time other than today. He knows he can live without football, he knows he is also wildly excited to play right now, and he knows people might have trouble reconciling the two.”

Beyond the brother bond, according to Rosenberg, Trevor’s “father says, ‘My advice to him, even in high school: ‘God has given you a great gift. But you know, at some point when the game’s taken more from you than it’s giving to you, you need to step away.’”

Before that happens, Lawrence will probably step into an NFL locker room somewhere and, with his skillset, look to be a difference maker on whatever team he ends up on (Jaguars?).