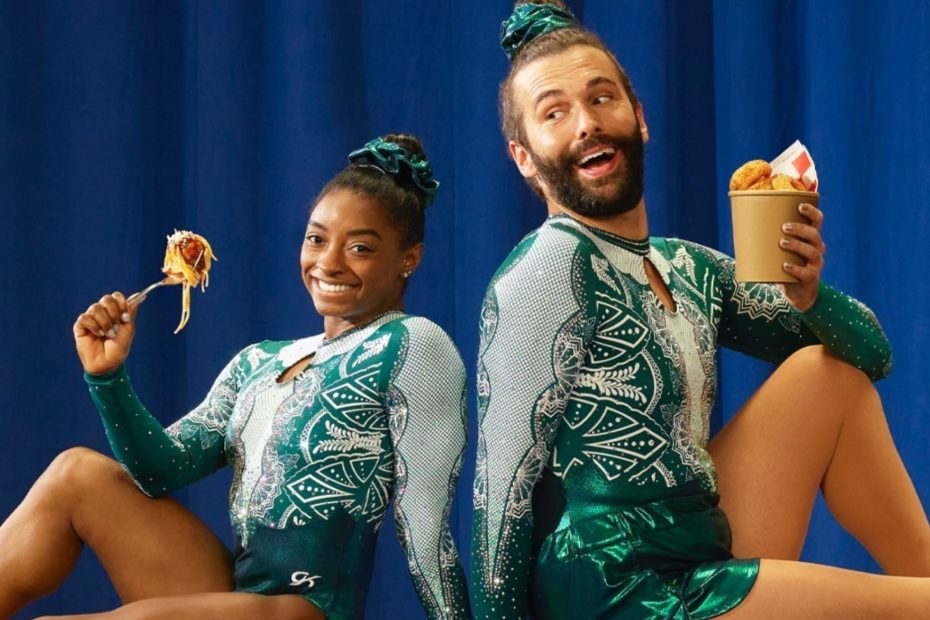 Simone Biles and Jonathan Van Ness’s Uber Eats Ad is still going strong nearly 9 months after it premiered. If you watched the Olympic qualifying event that wrapped up on June 27, then you probably saw it a couple of times on your television screen.

Following the postponement of the 2020 Olympics, the world is anxiously awaiting the Games to begin this summer. And many eyes will be on returning Olympian Simone Biles, who unsurprisingly, won the Olympic qualifying event.

However, what was surprising was the emotion we saw from Biles during the last night of the event. The world got to see the human side of the best in the world.

“I kind of got in my head today and started doubting myself,” Biles said in an interview. “And you could see that in the gymnastics. But just go home, work harder. This is just the beginning of the journey.”

Isn’t that the truth? And unfortunately, while spectators will not be allowed at the Games this year, we have a feeling Van Ness will be ordering Uber Eats and watching his co-star likely become the most decorated gymnast in the world from afar!

In a society where ordering take-out for delivery has become a fairly common thing, the “average person has two food delivery apps [on their phones] and uses them 3-times per month” according to US Foods.

Uber Eats is one of those leading food delivery apps and has cast multiple different actors, athletes, and more to promote what they do, bringing your favorite food from your favorite local eatery to your front door. One of the latest series of ads for Uber Eats stars four-time Olympic gold medal gymnast, Simone Biles, doing her thing on the mat.

Also starring alongside Biles is Queer Eye star, Jonathan Van Ness. This is something that upset some people. In particular, the stars of the ads upset the non-profit One Million Moms organization, who cited that the ads are damaging to young viewers.

“Casting a cross-dresser in its ads screams liberal agenda and turns off potential Uber Eats customers,” One Million Moms said in a statement. “For anyone curious or struggling with his or her sexual identity, watching someone prance around in the opposite sex’s clothing is not the answer. Rather, it’s imperative to answer a person’s tough questions about gender and sexuality from a biblical perspective in a caring way like American Family Studios has done in its new documentary, In His Image.”

The organization has a petition out against Uber Eats asking them to “remain neutral in the culture war” or else they’ll support other delivery services. That petition so far has 7,189 signers as of Wednesday.

“Shame on Uber Eats for attempting to brainwash viewers with an agenda instead of focusing on providing a helpful service, especially during a pandemic,” One Million Moms said in the statement. According to People, Uber Eats shared this statement, in response.

“At Uber Eats, we’re unapologetically committed to representing the flavor spectrum. From tacos to talent, we like it spicy. JVN and Simone serve gymnastic prowess and ferosh self-confidence, qualities millions of moms everywhere can—and do—support.” Simone Biles was also unapologetic in her statement as well.

“The world we live in makes me sad,” Biles said in a tweet. “But I’d do x1000000 more commercials with you just to piss everyone off! The LGBTQIA will always have my support and feel welcome on my socials.”