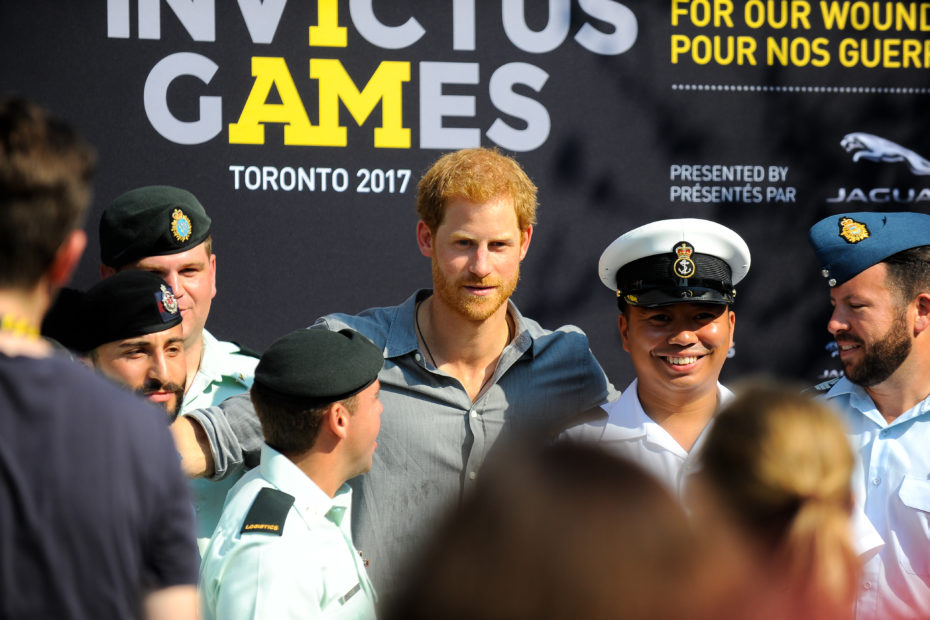 The Invictus Games were founded by Prince Harry, Duke of Sussex in March of 2014. It’s an international sport competition that’s similar to the Paralympics – except the Invictus Games are reserved for wounded and injured servicemen and women from countries around the world.

Prince Harry gained his inspiration for the Invictus Games when visiting the Warrior Games in 2013. He saw first-hand how sport can be used as a recovery mechanism – physically, mentally, emotionally, spiritually, and socially – for those wounded by the horrors of combat.

The term ‘invictus’ means ‘unconquered’ in Latin and was popularized in a poem by William Ernest Henley. The poem speaks of gaining strength in the face of adversity, something these servicemen and women are far too familiar with. The Invictus Games is ‘for the unconquered.’

RELATED: 20 Sportsmanship Quotes You Should Teach Your Children

Moments to Remember at the Invictus Games

According to the official website, the Invictus Games “use the power of sport to inspire recovery, support rehabilitation and generate a wider understanding and respect for wounded, injured and sick Servicemen and women.” It gives these men and women new meaning and purpose.

The first Invictus Games were held in London in 2014. Since then, Prince Harry has brought the Invictus Games to Orlando, Florida (United States) in 2016, Toronto (Canada) in 2017, Sydney (Australia) in 2018, and most recently in The Hague (The Netherlands) just a few weeks ago.

The Invictus Games in The Hague started on April 16, 2022 and came to a conclusion on April 22, 2022. The events include disciplines from track and field, driving, powerlifting, archery, indoor rowing, cycling, wheelchair basketball, wheelchair rugby, sitting volleyball, and swimming.

Let’s take a look at some of the

The Invictus Games are a time for perseverance and never giving up. Hundreds of athletes from 20+ countries gather to prove they aren’t ready to give up on their dreams and goals. With that said, moments like the one pictured above give the Invictus Games much more meaning.

Lasse Sebastian Jakobsen, a competitor representing Team Denmark, popped the question to his girlfriend, Karina Cronberg, during the second day of the Invictus Games. She, of course, said yes – which marks a new beginning in both of these two love birds’ happy and loving life.

14. The Fight, the Commitment, the Unconquered

Retired U.S. Air Force Maj. Lisa McCranie (United States) and former parachute rigger Emma Murfet (Australia) were in a battle during the 200m dash. McCranie ended up winning by a hair (literally), earning the gold medal for the US. Don’t worry, Murfet won a total of four medals.

We’re not done with the proposals. Not long after the Denmark couple showcased their love on a big stage, another couple decided it was time to spend the rest of their lives together. In fact, it happened on the same day – Cupid must’ve been busy on this particularly special day.

A Romanian competitor, Angel Paul Ilovan, asked his girlfriend, Cezara Sorana, to marry him after he completed the 100m race. It was a moment they will never forget as they now have a wedding to prepare. And if you thought this was our last proposal, we have more for you below!

With hundreds of competitors from all around the world, it’s no surprise that we come across moments like this. The venues of each event are packed with friends, family, and other supporters cheering their loved ones on as they compete for a shot at a coveted gold medal.

In this particular picture, we see a young child high-fiving what’s likely a family member. The shirt on the young child is what captured the hearts of many – it says “Papa, You Are Invictus.” We don’t know who ‘Papa’ is, but he’s one lucky human being to have such a supportive child.

11. The Yellow Wall of Competitors, Friends, and Family

The wall is black and the names are written in yellow. The wall is long enough that it would take you a while to find your name, but it’s worth it when you do. Like Luke Cooper said in the video above, it probably means a whole lot of different things to different people. It’s a great tribute.

By now, we’re all well-aware of the devastating war that Russia started in Ukraine. It’s an unprovoked and heartbreaking war that’s killing thousands of people – not just servicemen and women, but also civilians. It’s a war that needs to stop immediately, yet there’s no end in sight.

Despite that, Team Korea took the time to extend their support for Team Ukraine, who were both competing in the Invictus Games. Korea raised funds and presented Ukraine with gifts during an awe-dropping exchange. It goes to show the camaraderie and unity these competitors have.

Przemysław Kowalski, competing as part of Team Poland, took home a gold medal in the IR6 one-minute Sprint during the indoor rowing event. He rowed a total of 376 meters during that one minute, which was seven meters more than Ukraine’s Serhii Naumov, who finished second.

8. The Single Yellow Chair in Every Venue

If you were to show up at a venue for the Invictus Games before anyone else arrived, you might recognize a single yellow chair randomly placed in the venue. At first, it might not mean anything to you, but that single yellow chair serves a purpose and it makes for a special moment.

The single yellow chair in every venue represents the family members that can’t be there to support the servicemen and women competing in the games. It’s a symbol that even though they aren’t there physically, they’re there in spirit. That single yellow chair has deep meaning.

7. Achim Gasper With a Personal Best

Achim Gasper is a competitor for Team Germany. He was injured in 2015 and while he thought that was his darkest moment, he wasn’t about to let that stop him. Six years later, his home was destroyed in a devastating flood that saw water levels reach eight meters high in his home.

After going through the wreckage, he found his Invictus Games coin and it gave him hope. Not even one year later, Gasper was competing in the one-minute and four-minute rowing competitions. He finished 12th and 10th, but he did walk away with a rewarding personal best.

Gabriel Ramon was an Airfield Defence Guard of the Royal Australian Air Force. He joined in 2015, was deployed to the Middle East in 2016, and was awarded the Commanding Officer’s Commendation for his excellence in the Combat Support Unit. He was discharged in 2019.

Wheelchair rugby is one of the more exciting events to witness at the Invictus Games. It’s always an intense atmosphere that’s full of competition. Team USA played five matches on April 19th, winning four of them. Their only loss came in their first match to the United Kingdom.

They took their four-game winning streak into the Semi-Finals, defeating Australia with a score of 21-11. That’s when they met their rival, the UK, in the finals as they looked for revenge. It was a close game, but the United States pulled out a narrow 23-20 victory to claim the gold medal.

Staff Sgt. Michael Murphy grew up watching the Olympics and Paralympics, so he knew how special it was to represent the United States at the 2022 Invictus Games. He’s an extremely patriotic American and took wearing the red, white, and blue very seriously during the Games.

Murphy is a visually-impaired blind athlete that competed in the 1500m athletics event. His guide, Josh Connell, helped direct him through the race, but it was Murphy’s resilience that earned him a gold medal in the event. He ran the 1500m in 5 minutes and 39 seconds.

Lisa Johnston, a competitor for Team United Kingdom, suffered an injury during a routine physical training session in 2014. It led to the development of Complex Regional Pain Syndrome, which resulted in her becoming an amputee in 2016. She wears a prosthetic.

Johnston was excited to compete in the Invictus Games and show her family that she can still find success in sport. She ended up winning the gold medal in Shot Put with a throw of 5.18 meters. The second place female threw it just 4.66 meters. She later got to hug Prince Harry.

Remember earlier when we said we weren’t done with the proposals – we weren’t joking. This proposal happened on the sixth day of the Invictus Games and shows just how powerful the games can be. Ironically, it was the second Denmark competitor to propose to their girlfriend.

It was Ronnie Tim Pederson that proposed to Mette Skjershede and don’t worry – she said YES! Pederson was competing in the powerlifting event. That’s when he got down on one knee, popped the question, and waited for her to say that magic word. Love was definitely in the air!

Our final awe-dropping moment from the Invictus Games was the final moment that brought it all together. On April 23rd during the closing ceremony, Prince Harry addressed the crowd of competitors, friends, and family. It was truly a special moment that captured the hearts of many.

When Are the Next Invictus Games?

The Invictus Games continues to adapt and evolve after a couple-year hiatus due to the COVID-19 pandemic. It returned to action this year and Prince Harry has already announced future plans for the games – which includes a trip to Düsseldorf, Germany next year (2023).

What’s even more surprising is the announcement of a winter sports edition of the Invictus Games – which will take place in Vancouver and Whistler in 2025. It’ll mark the second time the Invictus Games is being held in Canada, with the first installment being in Toronto in 2017.

The Invictus Games are becoming a popular and rewarding competition for those injured in the line of combat. These men and women have faced the many horrors of war and foreign affairs, but are brought together as one for a week of sport, competition, camaraderie, and fellowship.