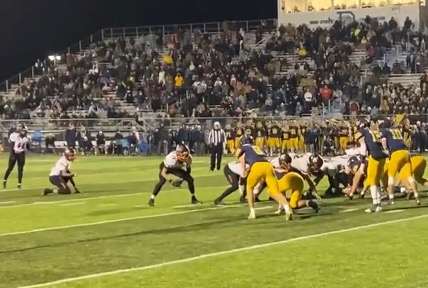 Carly Roth, a senior kicker based in Ohio, led her high school football team to a 38-35 victory over on Saturday night.

With practically no time left on the clock, Roth produced a staggering 27-yard field goal which concluded the game. It was an intense match between two of the best Northwest Ohio Athletic League teams, but the Liberty Center Tigers ultimately triumphed over Archbold due to the kicker’s impressive talents.

When the ball made it over the goal line, the crowd immediately erupted into supportive cheers, her mom was even seen breaking down into tears and collapsing in the stands. The rest of her team engulfed her in a wholesome hug, making sure she know that she is a vital asset on the team.

Initially, the senior had no intentions of football becoming a serious after-school activity. However, when the school’s typical kicker faced a season-ending injury that had him benched, Roth found herself stepping up to the field and absolutely dominating the competition.

“This is incredible,” Roth reported to Yahoo! News. “I’ve never felt anything like it. I never imagined it. They’ve all believed in me from the start. They always pushed me to get better. They have accepted me as one of them.”

RELATED: Julia Hawkins Completes an Astonishing 100 Meter Run at the Age of 105

In a joking tone, the senior kicker added, “This means a lot because our soccer program always gets beat by Archbold. It feels really good to get this win.”

Zane Zeite, quarterback for the Tigers, also commented on his team’s hard work and dedication throughout this season and how it’s led them to this incredible win. “I’m just so proud of my teammates,” he said. “We all put in the work all season, and it paid off. It came down to our coaching staff training us to be disciplined all year, and it’s moments like this that count. Archbold is tough. Hat’s off to them.”

Of course, the quarterback couldn’t thank his teammates without specifically noting the importance Roth had throughout this season.

“I don’t know how she did it,” Zeite admitted. He then said, “I’m at a loss for words. That takes some guts, that’s for sure. This is her first year kicking. Our starter went down, and she stepped up and made plays. She is accepted like any one of us, and she does everything like all of us. She’s a part of the team.”