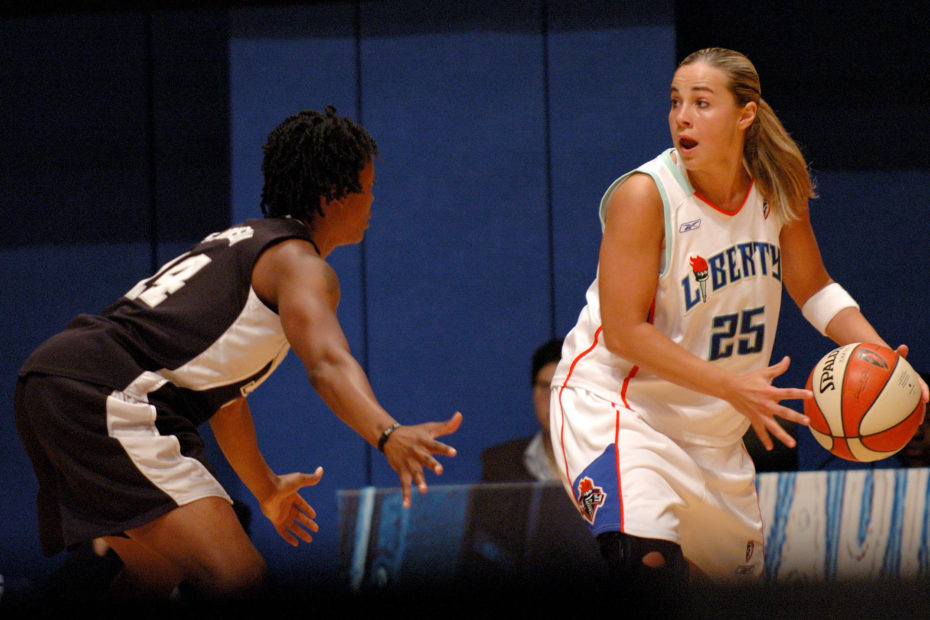 As the talent in these sports continues to rise, so does the gender gap. It’s not that women aren’t talented enough – because they are. Instead, they aren’t given the same amount of attention as their male counterparts. And even when they do, they aren’t paid half as decently as men.

Just take soccer for example. The United States women’s national team has long been the more successful team when compared to the men’s national team. Yet, the women weren’t getting paid what the men were – so much that they recently settled on an equal pay agreement.

The sports community as a whole is beginning to open up to the idea of female representation in male dominated sports. While it’s nowhere near what it should be, it’s a lot better than it was just a few years ago. Today, we’re seeing a number of females break their way into these sports.

During the 2021-22 NFL season, there were a record 12 women coaching in professional football. There are also six women actively coaching in the NBA and 11 women working as on-the-field coaches in major and minor league baseball. We’ve also seen growth in the NHL.

To commemorate the rising number of females in male dominated sports, let’s take a look at some of the most prominent ones today – some of them coaches, and some of them players.

Catherine Raîche is currently the Vice President of Football Operations for the Philadelphia Eagles of the NFL. In a day and age where females aren’t heavily represented in the front office, Raîche continues to climb the ladder. She’s the second-highest ranking female in NFL history.

Raîche earned a law degree at Université de Sherbrooke in Quebec, as well as a master’s degree in tax. She was originally working at a law firm, but decided to switch her career into sports management. Between 2015-2019, she held front office positions in the CFL and XFL.

In July 2019, Raîche made the move to the NFL. She was originally hired as football operations and player personnel coordinator of the Philadelphia Eagles, which she held until her promotion to VP of Football Operations in May 2021. She’s heavily involved in the day-to-day operations.

Lindsey Harding always had a knack for basketball. She had a legendary career as a guard for Duke University before being drafted No. 1 overall in the 2007 WNBA Draft. She then played nine seasons in the league and averaged 9.8 points, 2.9 rebounds, and 4.1 assists per game.

After retiring from the WNBA, she began a coaching career. During the 2018 season, she was hired as a pro personnel scout for the Philadelphia 76ers of the NBA, becoming the first African American to hold such a position. She was then promoted to a player development coach.

Today, Harding is an assistant coach and player development coach for the Sacramento Kings. She’s in her third season with the team and plays an integral role in developing the Kings’ young roster. She was also head coach of the South Sudan Women’s Senior National Team in 2021.

Alyssa Nakken is a name most baseball fans are aware of by now. In January 2020, she became the first full-time female coach in the MLB when the San Francisco Giants promoted her to an assistant coach. She previously served as an intern, originally joining the team in 2014.

Later that year, she became the first on-the-field female coach in MLB history, though it was during exhibition play. She continued to do so throughout 2021, but made history again on April 12, 2022 when she achieved that same milestone at first base during a regular season game.

Nakken was a three-sport athlete in high school and eventually played college softball for the Sacramento State Hornets. She was a first baseman and finished her college career (four years) with a .304 batting average. She loves baseball and has a bright future as an MLB coach.

Jenny Boucek played college basketball at the University of Virginia and led her team to four ACC titles and three Elite Eight appearances. She graduated with a degree in sports medicine and sports management at Virginia’s Curry School of Education and Human Development.

After school, she enjoyed a brief professional basketball career that was cut short due to a career-ending back injury. She immediately began a coaching career in the WNBA and was eventually named head coach of the Sacramento Monarchs and later the Seattle Storm.

She failed to meet expectations as a head coach, but became the third female assistant coach in NBA history. She joined the Sacramento Kings, the Dallas Mavericks, and now serves as an assistant coach with the Indiana Pacers. She’s one of six active female coaches in the NBA.

During her time in the WFA, she was also coaching basketball at Greensboro College and was eventually named the head coach of Johnson & Wales University basketball team, where she led the team to a national championship after just two years. The team went 22-4 that season.

That’s when she made the jump to the NFL with the help of Ron Rivera, who hired her as an intern with the Carolina Panthers and later the Washington Commanders. She became the first full-time African American female coach in the NFL in 2021 and currently serves as the assistant running backs coach in Washington.

Lori Locust has always had a deep love for football. She played four seasons as a defensive lineman for the Central PA Vipers in the Independent Women’s Football League, where she was eventually named team captain and MVP. Unfortunately, she had to retire due to a knee injury.

Since retiring, she has enjoyed a long and illustrious coaching career – mostly on the defensive line. She coached in the USWFL, Susquehanna Township High School, American Indoor Football, National Arena League, and several other semi-professional football leagues.

We’ve talked a lot about female coaches breaking their way into male dominated sports, but let’s take a second to commemorate a female athlete that has risen to the top of women’s hockey – a sport largely dominated by men. Her name is Marie-Philip Poulin and she’s good.

She’s the best female hockey player in the world and has been for nearly 15 years. She has played 98 games in the CWHL, recording 93 goals and 103 assists in that time. She also played 79 games at Boston University, scoring 81 goals and dishing 100 assists in her four years.

That’s just the beginning because she has also had a lot of success on the national stage. She’s the long-time captain of Canada’s national team and has helped them win three Olympic golds and one silver. In 66 games with the team, she has scored 41 goals and dished 49 assists.

Marie-Philip Poulin might be the greatest female hockey player of all-time, but let’s not forget about Hilary Knight. The two have built quite the rivalry as Canada and Team USA go head to head often. Knight has helped Team USA to three Olympic silver medals and one gold medal.

Between 2007 and 2012, Knight played 138 regular season games for the University of Wisconsin. During that time, she scored 128 goals and dished 97 assists. She also played in 23 playoff games, scoring 15 playoff goals and dishing 22 playoff assists. She was dynamite.

Over the next seven seasons, she played 115 CWHL and NWHL games, scoring 85 goals and dishing 82 assists. She also played in 67 games for Team USA between 2007 and 2019, in which she scored 51 goals and dished 44 assists. She’s now an NHL analyst for ESPN.

Becky Hammon is one of the greatest WNBA players of all-time. She spent 16 seasons in the league, eight with the New York Liberty and eight with the San Antonio Silver Stars. She was a six-time All-Star and averaged 13.0 points, 2.5 rebounds, 3.8 assists, and 1.1 steals per game.

After retiring from the WNBA after the 2014 season, she expressed her desire to coach and eventually landed with the San Antonio Spurs of the NBA. She was hired as an assistant coach, becoming just the second female to earn a coaching role in the NBA. She impressed many.

Her relationship with head coach Gregg Popovich continued to grow and she even led the Spurs to a Summer League championship in 2015. In 2020, she became the first female head coach in NBA history when Popovich was ejected during a game. She is well respected in the NBA.

While she has since taken a head coaching position in the WNBA with the Las Vegas Aces, many believe she will one day become a head coach in the NBA. She definitely deserves it!

Rachel Balkovec is currently doing what no other female has ever done in the sport of baseball – managing a professional baseball team. In 2022, she became the full-time manager of the Tampa Tarpons – a Class A minor league affiliate in the New York Yankees organization.

She was a strength and conditioning coach in the St. Louis Cardinals and Houston Astros organizations before signing as a hitting coach for the New York Yankees. After a couple seasons with the Yankees, they named her the official manager of their Class A affiliate.

Females Are Just Getting Started in Male Dominated Sports

With that said, it often only takes one woman to stand up and fight for change. We’ve seen that happen multiple times in the past few years and it’s what’s leading to the continued growth we’re seeing in pro sports today. Most of them are given small coaching roles, but it’s a good start.

YOU MAY ALSO LIKE: 25 Best UFC Women Fighters of All-Time

As we start to see more women in male dominated professional sports leagues, let’s not forget that women are just as capable as men – in fact, some are more capable than men. The WNBA is a perfect example of how talented women can be when you give them an equal spotlight.