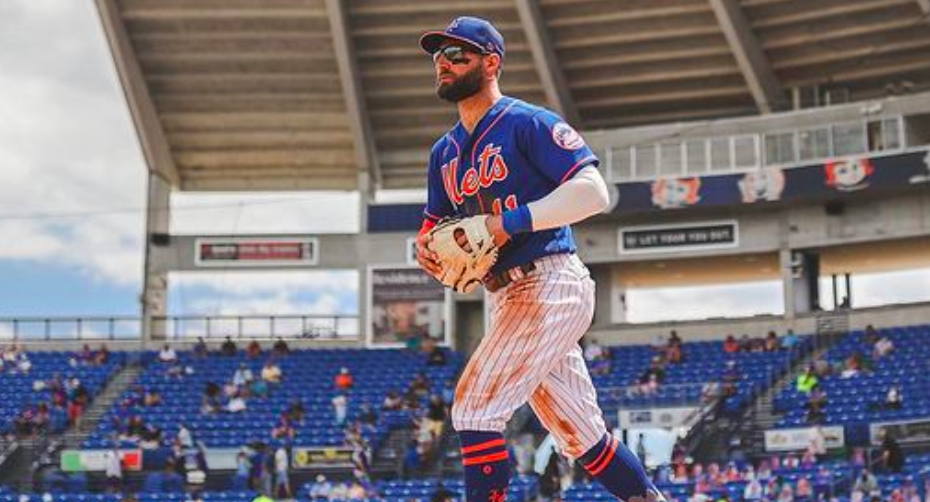 Kevin Pillar Shares How He’s Doing After Getting Hit By Pitch In The Face: ‘Scary Moment But I’m Doing Fine!’

After what was a scary moment on an MLB baseball diamond Monday evening, people thankfully woke up to some good news on Tuesday.

It was the top of the seventh. The New York Mets were on the road against the Atlanta Braves. Kevin Pillar stepped up to the plate with Jacob Webb pitching. Then, with the count at 1-2, the next pitch ended up hitting Pillar in the face.

According to ESPN, “Pillar suffered multiple nasal fractures Monday night when he was hit in the face by a fastball from Atlanta Braves reliever Jacob Webb, a frightening scene that shook both teams.”

After a few moments of training staff and coaches surrounding him, Pillar got up. And Braves play-by-play announcer on Bally Sports South, Chip Caray, said it best after shock, prayers, concern:

“Thank God he can walk off the field,” Caray said on the broadcast.

“Thanks to everyone that has reached out!” Pillar tweeted Monday night. “Scary moment but I’m doing fine! #RBI#gamewinner…”

RELATED: Want To Be In A Book Club With Mets Pitcher Noah Syndergaard? Find Out How!

The fact that he included the RBI and game winner hashtags at the end, shows how much of a concern he has for his team in the midst of going through what he rightly labeled a “scary moment” himself.

Another example of how Pillar responded to this whole situation:

Pillar wasn’t only concerned with being there for his teammates but for the guy who accidentally hit him with that baseball. Pillar mentioned (as SNY tweeted the press conference) that accidents happen, he knew that Webb didn’t want to hit him, and how him and Webb talked Monday and Tuesday.

“I’m almost more worried about him than I am myself,” Pillar said in the press conference per SNY. “Because I know, I saw his reaction and I know how tough that can be on someone who feels responsible for someone getting injured…I know that it was unintentional and he needs to continue to be confident and believe in himself and his stuff and that I’ll be fine.”

“When I texted him, I personally told him it wasn’t intentional at all, and kinda just, pitch kinda just got away from me right there,” Webb said per Yahoo! Sports’ Ryan Morik. “Other coaches obviously reached out to him as well. Everyone’s been very good about it. And it’s nice to see that everyone cares about him and everything going on and all that.”

“I’m just glad he’s alright,” Webb said per Yahoo! Sports’ Morik. “That was my main concern…It’s tough, man. You never want to hurt a fellow competitor out there. We’re all here trying to do the same thing. Just a tough situation…”

We are all glad he’s alright and excited to see Pillar back playing the game he loves. But, until then, hope and pray Pillar just has a healthy recovery.

Hear from the man of the hour himself, who his team describes as a “warrior”:

“I feel good,”Pillar ‘told reporters before the Mets’ 4-3 win‘ as transcribed by ESPN. ” I feel real good, actually. Despite not looking so good, I feel as close to normal as possible. The only tough thing is my right eye is suffering from a little bit of swelling, and I can’t really breathe out of my nose. But besides that, I feel good and I feel lucky and excited to get on this recovery and get back to what I love doing.”