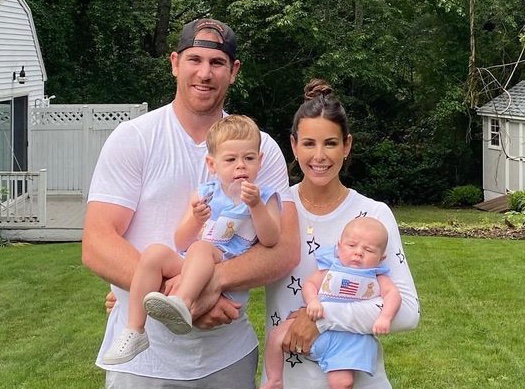 Jimmy Hayes’ Window Kristen Speaks Out After 1 Month of Mourning: ‘Hardest, Worst Month of My Life’

Jimmy Hayes, who played hockey for the Boston Bruins, tragically passed away on August 23rd. Completely shattering the world of his family, after a month of grieving, his window Kristen wrote a moving tribute to her late husband.

Last month, Hayes was celebrating his firstborn son’s birthday and only hours later, he was pronounced dead on the scene by first responders in his Massachusetts home at the age of 31.

His cause of death is yet to be confirmed, but the Massachusetts medical examiner’s office spokesperson explained after the autopsy, “cause and manner of death remain pending and an update is not expected for several weeks when toxicology testing comes back.”

Kristen took to Instagram to share photographs of her wonderful family of four where she detailed her experience one month into the grieving process. The photos depict herself and Hayes alongside their two children. They share a two-year-old son named Beau, and Mac who is only a mere four months.

“What I would give to go back to this night. At the beach, holding hands, kissing, laughing, throwing rocks, putting smiles on our babies faces,” the opening statement read. She went on to state, “That’s all we ever wanted to do. And we did it. And I will continue to do it.”

“Today is one month without you. How??” Kristen Hayes went on to question. She continued and posed, “I could sit here and write about how this has been the hardest, worst month of my life, but what good would that do?”

RELATED: 25 of the Top Horse Race Tracks in the World

The Hayes family is still grieving, but ultimately staying strong.

Understanding that commenting on how difficult the horrifying experience won’t change the past, Kristen decided to applaud herself and her family for their strength through the challenging hardship. Giving credit where credit is due, Hayes’ wife stated, “Instead, today, I look back on this month and am in awe of how strong myself, the boys, and our families have been.”

“Our lives were turned upside down. Words can’t even come close to expressing how much I miss and need you so I’m not even gonna go there on here, but damn this sucks,” she additionally included. However, she closed her statement and noted that she must continue fighting for the sake of her, and their two children. She wrote, “n the meantime keep sending me signs and giving me strength. We love you always, dadda.”