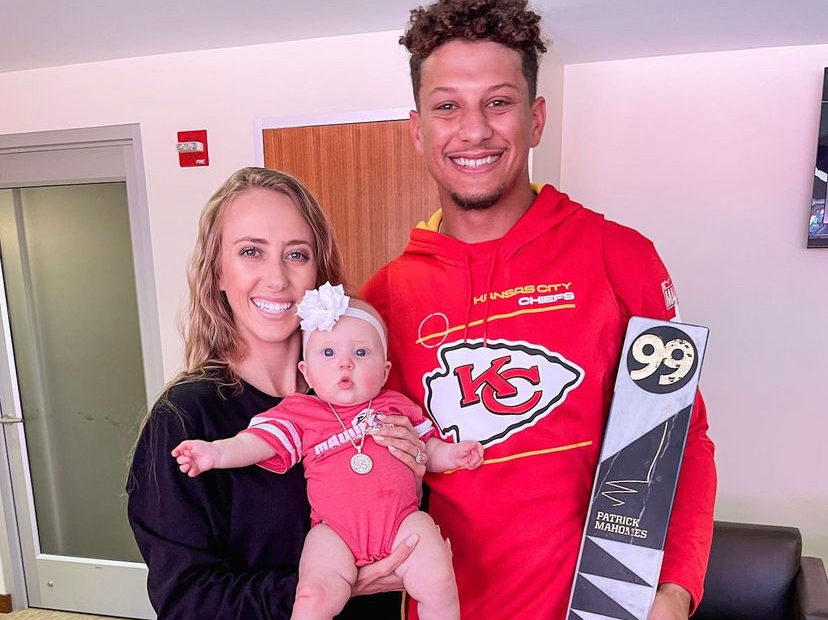 On February 20, 2021, NFL star Patrick Mahomes and his wife Brittany Matthews welcomed their first daughter into the world, Sterling Skye Mahomes. As of this week, Matthews found a creative way of using 5-month-old Sterling to deliver amazing news to her quarterback husband.

Approaching Mahomes with their astonishingly cute daughter, Sterling was seen wearing a red onesie that read “My dad’s in the 99 Club again,” indicating that Mahomes would be participating in the upcoming release of the Madden NFL ’22 video game.

The encounter was posted to the personal Instagram account of Matthews in video format. When Mahomes spotted his daughter and wife, all he could exclaim was “Nice!” and referred to the big news as “the best surprise ever!”

The NFL player then unboxed a multitude of different Madden NFL ’22 goodies which included a sparkling necklace that could be seen on Sterling’s neck in a future Instagram post. The 25-year-old athlete took to the internet to acknowledge his gratitude, but more importantly note that his daughter was the one that put in the hard work to deliver the information.

The Mahomes-Matthews baby is new to the internet world.

Since June, this is one of the first times that Sterling has been shared for the world to see. The couple admitted to People that they wanted to hold off posting images of their daughter’s face until they were comfortable to do so.

“Well, first we didn’t want to [show her in photos], especially when she was so young. We wanted to kind of keep that stuff personal to us and so we kept some of the photos and stuff like that for a while,” the quarterback elaborated. He additionally added, “And then it kind of got to a point where we had her all the time and we enjoyed being with her so much, and we were tired of hiding her from everybody.”

He also went on to explain that it was simply a matter of being tired of hiding Sterling from the world. “So it wasn’t that we were trying to show her to the world, I guess in a sense; we were just tired of having to hide her everywhere we went. We wanted her to be a part of our lives because she is such a big part of it,” Mahomes stated.

“… It [gave us] a little relief off our backs that we didn’t have to hide her everywhere and we could show her to the world and let them enjoy her as much as we do every single day.”