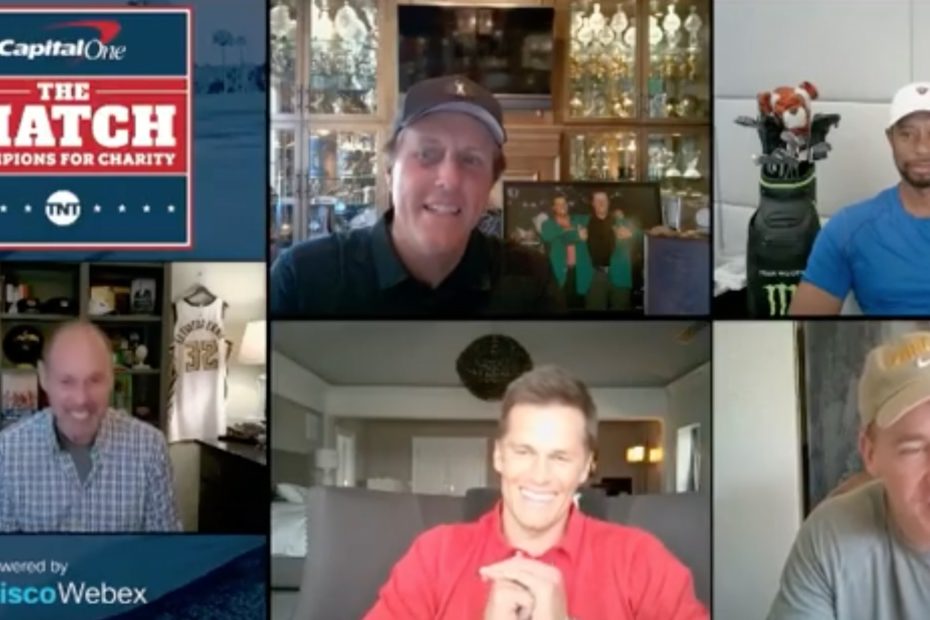 Tom Brady, Peyton Manning, Tiger Woods, and Phil Mickelson have all agreed to compete in what is being called “The Match: Champions for Charity.”

The tournament will be between Mickelson and Brady’s team versus Manning and Woods’ team. The funds raised during the golf outing, $10 million, will be donated to COVID-19 relief funds.

The Match was first announced last month and finally received an air date. According to Turner Sports PR, Turner Sports with exclusively present “@CapitalOne’s #TheMatch: Champions for Charity” on Sunday, May 24, at 3 p.m. EST.

“I would have loved to have this tournament in a place where they don’t like Tom very much, Indianapolis, Denver, Boston, after he just betrayed them and broke there hearts, so Palm Beach is the best we could probably do.”

And as a way to promote the event, Woods, Brady, Manning, and Mickelson hopped on a Zoom call to talk about The Match. What Brady didn’t realize is that Manning would do an incredible job of roasting him during it.

To Manning’s credit, Brady started it. “I actually thought I was going to be Tiger’s partner,” Brady said while explaining his Instagram post which hilariously mocked Manning and Woods. “But then Payton’s dad called and switched the teams so Phil and I decided to see if we can take them on.”

After that is when Manning let Brady have it. “Ernie, the tournament had to be in Florida, you know, after Tom’s B&E arrest. The ankle monitor meant he couldn’t leave the state. So it had to be in Florida. Tiger and I talked to the sheriff in Tampa, he’s gonna be allowed to go to Palm Beach to play.”

But that wasn’t all of the jokes Manning had up his sleeve. “I’ll be honest,” Manning continued. “I never played Tom very well on his own turf and maybe this is considered a neutral site. I would have loved to have this tournament in a place where they don’t like Tom very much, Indianapolis, Denver, Boston, after he just betrayed them and broke there hearts, so Palm Beach is the best we could probably do.”

Mickelson and Tiger had their fun poking at each other too.

As Turner Media reports, this is how the tournament will be played:

“The competition will feature Woods and Manning vs. Mickelson and Brady, facing off in Team Match Play with a Four-Ball (Best Ball) format on the front nine and a Modified Alternate Shot format on the back nine, where each participant will tee off and then the team will play alternate shot from the selected drive. The unique combination of formats is aimed to provide an entertaining mix of strategy, team collaboration and consequence to nearly every shot. As part of the competitive play, there will also be a set of on-course challenges to raise additional charitable funds.”

Will you be watching?