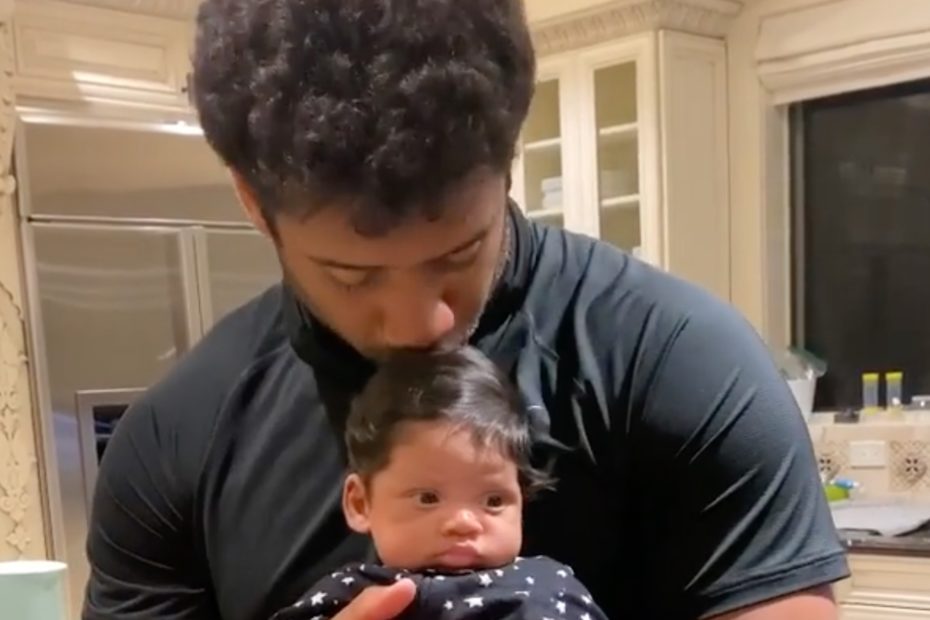 Seattle Seahawks quarterback Russell Wilson is giving his fans a glimpse of his life off of the football field, as well as the first good look at his youngest child, Win. Wilson and his wife, pop star Ciara, welcomed Win into the world just a month ago.

And because Wilson is the dad of a newborn baby, his time away from the football stadium is a lot more relatable than one may think. No, it’s not all prepared meals and massages to get him ready for the new season, it’s also late-night feedings and cuddle sessions with his newest son.

In the most adorable video taken by Ciara, fans can see Win straight chillin’ on his daddy’s lap. As the dad said in the video, the baby boy was waiting to be fed.

The video was also captured in the wee-hours of Thursday morning. “‘Sir Win!’ Late Nights! Team No Sleep!” Wilson captioned the video.

Ciara also commented on the post joking about Win being a bit of a night owl. “Win be like… ‘y’all thought y’all was about to sleep?!:)…it’s turn up time!’ Him so precious!”

As At The Buzzer previously reported, on July 23, Russell Wilson and Ciara welcomed their second child into the world, who they named Win Harrison. At birth, he weighed 8 pounds, 1 ounce. Win joins their 3-year-old daughter, Sienna, and Ciara’s oldest son from a previous relationship, Future, who is 6.

RELATED: Russell Wilson Learns How to Do His Daughter’s Hair, Wife Ciara Praises Him With Adorable Video

And ever since Win came into the world, people think he is Wilson’s twin. And this video is only proving the further, his fans say. “Oh my lorddd my womb!!! What a beautiful blessing… Daddy twin,” one commenter wrote. “Head full of hair!! That’s his twin, again! His genes are strong,” another commenter added, referencing that many people think Sienna is also her daddy’s twin.

It’s all just too too sweet!