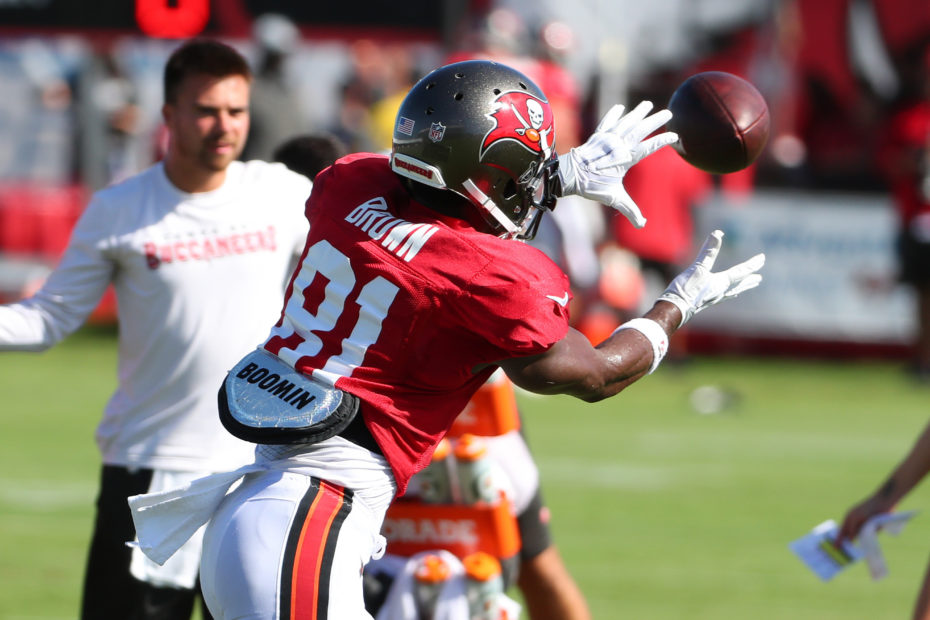 Antonio Brown Says Buccaneers Were in the Wrong, Not Him

It seems like we can’t go a week without Antonio Brown causing some sort of drama in the NFL and that cycle continued on Wednesday. Brown is accusing the Tampa Bay Buccaneers of unloyalty after allegedly trying to force him to play through an injury midway through Week 17.

The Tampa Bay Buccaneers were playing the New York Jets on January 2nd when Brown got into a heated exchange with the coaching staff. It ended with Brown taking off his jersey and prancing through the end zone as he exited the field midway through the third quarter.

The Buccaneers and Brown have two completely different stories as to what happened. Tampa Bay says Brown was furious at his lack of targets in a game where they were without key receivers. Brown says he was dealing with a lingering injury, which the team was overlooking.

RELATED: Rob Gronkowski Unsure of His Future in the NFL

He finally spoke out about the incident when he sat down with Nate Burleson of NFL Today and CBS The Morning. This comes not even 24 hours after Brown accused the Bucs of offering him $200,000 to step away from the game of football and enter himself into a mental health facility.

According to Brown, “”I never had a mental health diagnosis. I never had an issue or problem. I don’t take pills. I just have a high IQ. I tried to (do therapy) in the NFL, but I don’t have time to consult with people I don’t know about my mental space or how I look at things.”

Will We See Antonio Brown in the NFL Again?

Every single time Antonio Brown makes negative headlines, I think to myself this is the final time we’ll have to deal with this. After all, I can never imagine a team wanting to take on all that drama. Yet, every single time, an NFL team proves me wrong and continues the cycle.

It goes to show that talent always prevails in the NFL, whether or not that talent comes with good character and a positive personality. And while Brown is a walking drama case no matter where he goes, he has enough talent to keep teams calling every single time he’s a free agent.

Brown is likely a future Hall-of-Famer, though his off-the-field antics will likely delay that accomplishment – much like we saw with Terrell Owens. AB has played in 146 games in his career and has compiled 928 receptions, 12,291 yards, and 83 touchdowns as a receiver.

He’s the only receiver to ever record six consecutive 1,000-yard, 100-catch seasons, which is worthy enough of a Hall of Fame induction. As for right now, he’s still a free agent since leaving the Bucs midgame and will likely find a home somewhere else – even if it’s just temporary.

YOU MAY ALSO LIKE: Ben Roethlisberger Announces Retirement From the NFL

He’ll likely consider taking legal action against the NFL, but that’s nothing new for Antonio Brown. It’s just another day, another problem for one of the NFL’s most troubled players in the past few years. Saddle up because this could get interesting as we uncover more.