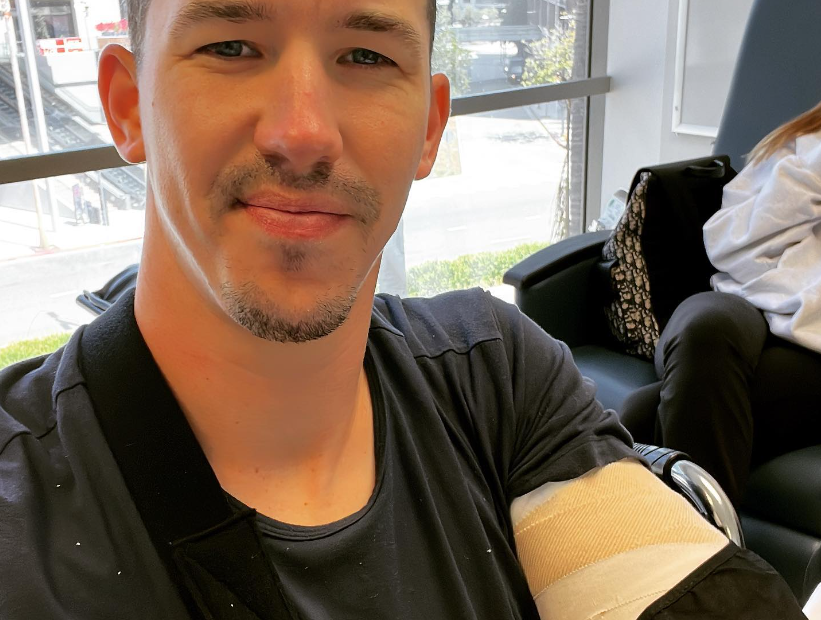 Buehler was drafted by the Dodgers in the first round (24th overall) of the 2015 draft out of Vanderbilt University. He made his major league debut on September 7, 2017 and last pitched on June 10, 2022 – which is when he started to experience elbow discomfort in his right arm.

In 115 games played and 106 games started, Buehler has a 46-16 record with a 3.02 ERA and 690 strikeouts. He has been one of the best pitchers in baseball since his debut and while we won’t see him for a while, he will be back and will likely be stronger than ever – so watch out!

Other Pitchers Who Had Tommy John Surgery

Before September 25, 1974, there was no such thing as Tommy John surgery. That all changed when Dr. Frank Jobe operated on none other than Tommy John himself – reconstructing the ulnar collateral ligament in his pitching arm. He had a one in 100 chance of ever pitching again.

Despite the odds being stacked against him, John returned to the MLB almost two years later and pitched for another 14 seasons in the majors. He retired in 1989 with a 288-231 win-loss record, 3.34 career ERA, and 2,245 career strikeouts. He amassed 20 wins in three seasons.

Since that legendary surgery back in 1974, more than 1,000 professional pitchers have had successful Tommy John surgery – giving many a second chance at furthering their careers in the greatest baseball in the world. Let’s take a look at 20 of the most memorable comebacks.

Matt Harvey made his major league debut on July 26, 2012 with the New York Mets. He had a 3-5 record with 70 strikeouts in 10 starts during his rookie year and followed that up with a 9-5 record with 191 strikeouts in a 2013 campaign that was cut short due to Tommy John surgery.

Jordan Zimmerman made his major league debut with the Washington Nationals on April 20, 2009. He started 16 games that season, posting a 3-5 record, 4.63 ERA, and 92 strikeouts. Unfortunately, he found himself needing Tommy John surgery towards the end of the season.

Unfortunately, his 2014 campaign was cut short after undergoing Tommy John surgery. He returned in 2015 and went 26-11 over the next three seasons – including a 16-8 record and 253 strikeouts in 2016. He unfortunately passed away in a boating crash on September 25, 2016.

Chris Carpenter dealt with a number of shoulder and elbow injuries throughout his career. He had shoulder surgery in 2002, which kept him out most of the 2002 season and all of the 2013 season. He returned in 2004 and had an impressive 51-18 record over the next three seasons.

Unfortunately, his injury problems persisted and he eventually needed Tommy John surgery in 2007. He returned in 2019 and had an impressive 44-20 record over the next three years. He retired in 2012 with a 144-94 career record, despite the onslaught of injuries he endured.

Francisco Liriano made his major league debut on September 5, 2005 and became a regular starter in 2006. He played in 28 games as a rookie, going 12-3 in 16 starts and throwing for 144 strikeouts. Unfortunately, he needed Tommy John surgery towards the end of his rookie year.

Tim Hudson made his major league debut on June 8, 1999 and made an immediate impact on the league. He had at least 10 wins in each of his first 10 seasons in the majors, but only had more than 10 losses in two seasons over that same span. He was a force to be reckoned with.

Things took a major turn towards the end of the 2008 season, when it was revealed that he needed Tommy John surgery. He returned late in the 2009 season and looked like his former self. He spent six more seasons in the league and retired in 2015 with a career 222-133 record.

Billy Wagner made his major league debut on September 13, 1995 with the Houston Astros. Over the next nine seasons, he had a 26-29 record as a relief pitcher, throwing a 2.53 ERA and 694 strikeouts in 504.1 innings pitched. He spent the next four years with the Mets and Phillies.

Towards the end of the 2008 campaign, while with the Mets, Wagner opted to have Tommy John surgery. He returned in 2009 and played 17 games for the Mets and Red Sox. He had a career year in 2010, posting a 7-2 record and 104 strikeouts in 71 games before retiring at year’s end.

Joakim Soria made his major league debut on April 4, 2007 with the Kansas City Royals and things were going very well for him – pitching at least 60.0 innings in four of his first five seasons in the bullpen. Things took a turn for the worse when he had Tommy John surgery in early 2012.

After missing the entire 2013 season, Soria played 26 games in 2013 with a new team – the Texas Rangers. Between 2014 and 2021, he bounced around and played for eight different teams. He announced his retirement at the end of last season after 14 years in the majors.

Josh Johnson made his major league debut on September 10, 2005 with the Florida Marlins and became a regular starter in 2006 – posting a 12-7 record and 133 strikeouts in 24 starts. After just four games into the 2007 season, Johnson had to have Tommy John surgery.

He missed practically the entire 2007 season, but returned in the middle of the 2008 campaign – going 7-1 in 14 starts with the Marlins. He continued his hot streak, going 26-11 over the next two seasons. Injuries started hindering his production and he eventually retired in 2013.

David Wells opted to have Tommy John surgery in 1985 – two years before making his major league debut on June 30, 1987 with the Toronto Blue Jays. He became a regular starter by 1990 and went 26-16 in his first two seasons as a starter. Apparently, the surgery helped.

Eric Gagne opted to have Tommy John surgery in 1997, nearly two years before making his major league debut on September 7, 1999 with the Los Angeles Dodgers. He was a relief pitcher until becoming the team’s closer in 2002 – where he really started to turn heads.

Gagne earned 152 saves in his first three seasons as full-time closer – winning a Cy Young award in 2003. Things took a turn for the worse in 2005, when injuries started to derail his career. He played sporadically over the next three years, but eventually retired in 2008.

John Smoltz made his major league debut on July 23, 1988 with the Atlanta Braves. Over his first 12 seasons in the MLB, he finished with at least 11 wins 10 different times – including a career-high 24 wins in 1996. During that time, he was a four-time All-Star and Cy Young winner.

Before the start of the 2000 season, Smoltz had Tommy John surgery – keeping him out until 2001. He was moved to a reliever and spent three years as the team’s closer – recording 144 saves. He returned to starter and went 44-24 over the next three years before retiring in 2009.

Seunghwan Oh had Tommy John surgery in 2001 while at Dankook University, causing him to miss the 2001 and 2002 seasons. Between 2005 and 2015, Oh played in the South Korean KBO League and the Nippon Professional Baseball league. He was a seven-time KBO All-Star.

Oh eventually made his major league debut on April 3, 2016 with the St. Louis Cardinals. Over the next four seasons, he posted a 16-13 record with 42 saves and 252 strikeouts in 232 games played. Since 2019, he has returned to the KBO League – where he began his pro career.

Rich Hill made his major league debut on June 15, 2005 and showed promise as a starting pitcher – especially after a 2007 campaign that saw him go 11-8 in 32 starts with the Cubs. He spent the 2009 season with Baltimore before signing a minor league deal with Boston in 2010.

After nine games with the Red Sox in 2011, Hill required Tommy John surgery – causing him to miss the rest of the season. He didn’t regain a starting role in the MLB until 2015 and posted a 35-18 record between 2016 and 2018. He’s currently a starting pitcher for the Boston Red Sox.

Jonny Venters opted to undergo Tommy John surgery in late 2005 while in the minors, causing him to miss the entire 2006 season. He eventually recovered and later made his major league debut on April 17, 2010 with the Atlanta Braves. He pitched in 79 games as a rookie in 2010.

2011 was a storied year for the relief pitcher, leading the league with 85 games played, finishing with a 6-2 record, and posting just a 1.84 ERA. Unfortunately, Venters had to undergo Tommy John surgery a second time in 2013 and third time in 2014. He almost needed it again in 2016.

Stephen Strasburg made his major league debut on June 8, 2010 as one of the most hyped prospects of all-time. He went 5-3 in 12 starts as a rookie in 2010, but his campaign was cut short after he had Tommy John surgery. He didn’t return to the team until September 2011.

Jacob deGrom was drafted by the New York Mets in 2010, but things took a turn for the worse when he needed Tommy John surgery after just six minor league starts. He missed the entire 2011 season, but started to make a name for himself over the next three years in the minors.

deGrom finally made his major league debut on May 15, 2014 and had a 66-49 record over the next six seasons. He has only made 32 starts in the past three years, largely due to shoulder and elbow injuries, but recently made his 2022 debut on August 2nd and has a 3-1 record since.

Let’s Hope No One Else Needs Tommy John Surgery

It’s continuing an unfortunate trend, with 15 pitchers and one infielder having Tommy John surgery in 2021 – and another 15 pitchers in 2020. It doesn’t matter whether they pitch with their right arm or left arm, pitchers are at an increased risk of tearing their ulnar collateral ligament.

YOU MAY ALSO LIKE: 25 Athletes Who Battled Cancer in Their Lifetime

While we sincerely hope no one has to undergo Tommy John surgery, it is a part of the game and is inevitable for some. Don’t worry, recent advancements in technology and practice make Tommy John surgery a safe and effective procedure for pitchers interested in pitching again.