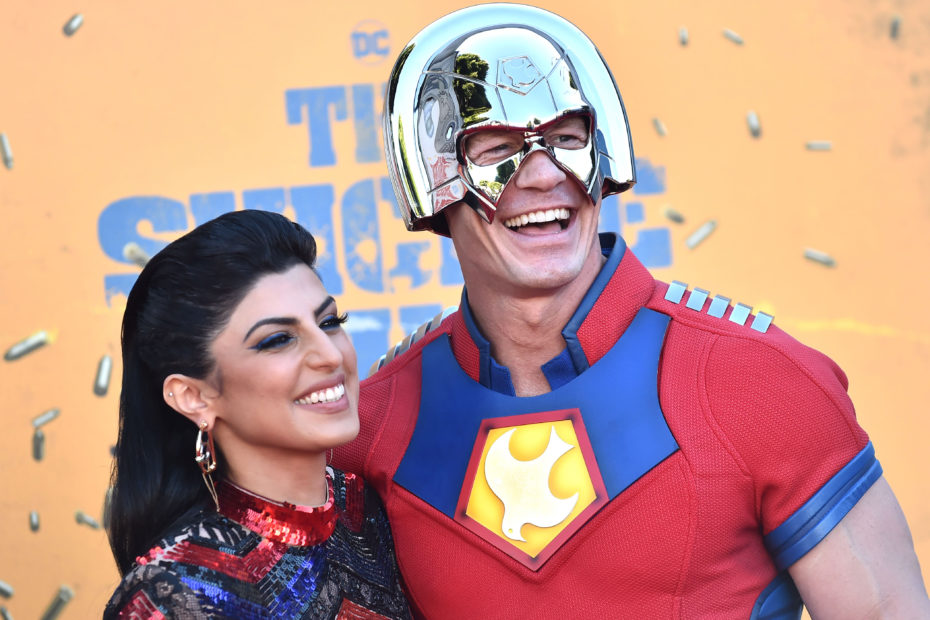 There’s nothing we love more than making some popcorn, getting comfortable on the sofa, and putting on one of the many funny John Cena movies. His acting is only getting better and his movies are only getting funnier, even the ones where he only plays a small or background role.

Cena was born and raised in Massachusetts and attended Springfield College, where he played football and was an All-American center. He graduated from Springfield in 1999 with a degree in exercise physiology and immediately began to pursue a career as a professional wrestler.

After one year with Ultimate Pro Wrestling (UPW), Cena started to make his early appearances for WWE in 2001. He won the WWE United States Championship in 2004 and his wrestling career took off from there. While he’s nearing retirement, he still has plenty of acting left in him.

John Cena’s acting career began in the early-2000s and mostly consisted of films produced by WWE and small guest appearances. By the turn of the decade, he started to receive bigger roles in some popular television shows and kids movies. This helped spur his acting career.

2015 was a big year for John Cena movies, especially in the comedy niche. In fact, three of the John Cena movies we’re going to highlight were released in 2015 and all but one of them was released in the past six years. As you can see, his acting career went from 0 to 100 real quick.

By now, you’re likely wondering what the funniest John Cena movies of all-time are. Don’t worry, we’ve got the goods and we’ll warn you now — it might be a good idea to start making some popcorn now because you’re going to want to start binge-watching these movies right away.

Surf’s Up 2: WaveMania was the sequel to the 2007 film Surf’s Up. While John Cena wasn’t involved in the first one, he was featured as a member of ‘The Hang 5’ — a group of one sea otter and four penguins that love to surf and would consider themselves thrillseekers.

Other members of ‘The Hang Five’ include Vince McMahon, The Undertaker, Hunter, and Paige — all WWE superstars at the time of release. It was one of four major films — and one of two as a voice actor — that John Cena worked on in 2017 after being cast in three major films in 2015.

The movie follows Cody Maverick, Lani Aliikai, Chicken Joe, and Tank Evans as they tag along with ‘The Hang Five’ in their pursuit of a legendary 50-ft wave. John Cena’s character has a blonde mohawk, green wristbands, dog tags, and camo shorts. Sounds like John Cena to me!

Psych: The Movie was a 2017 film based on the popular television series, Psych, which came to an end in 2014. The movie follows the same main characters — Shawn, Juliet, and Gus — from the TV series, but three years in the future after they relocated to San Francisco in 2014.

In the movie, Shawn and Gus attempt to find out who shot Juliet’s partner. In the meantime, Shawn tries to find his grandmother’s engagement ring so he can get married and Gus runs into problems with his boss. Along the way, they meet up with old friends and have a few laughs.

John Cena’s character, Ewan O’Hara, is Juliet’s brother. He’s a member of the United States Military and made one appearance in the main television series (in the same role). In the movie, he only makes one brief appearance in the end, but he makes his limited screen time worth it.

The Suicide Squad is the second film based on the popular team of superheros in the DC Extended Universe. While John Cena wasn’t in the first one, he was cast as Peacemaker in the second one — which was released in 2021. It was his first superhero role and he made it count.

As a member of the Suicide Squad, Peacemaker is tasked with covering up the United States’ involvement in Starro. After Peacemaker learns that Ratcatcher 2 knows the truth about Starro, he attempts to take her out. Before he can, Bloodsport shoots Peacemaker and takes off.

Throughout the rest of the film, it was unknown whether Peacemaker was dead or alive. In the post-credits, however, he was shown to be alive. It was later announced that Peacemaker would be given his own spinoff show in 2022. The show will also be directed by James Gunn.

Sisters was a 2015 film directed by Jason Moore and was the second major film starring both Tina Fey and Amy Poehler — two actresses that became quite the power duo in the movie industry. It was also one of John Cena’s first breakout roles in the comedy film niche.

The movie follows two sisters — a single mother and a recently-divorced nurse — who are asked to clean out their childhood bedrooms at their parent’s house before they sell it. The sisters end up throwing one last party at the home, but things quickly take a destructive turn for the worse.

Cena’s character, Pazuzu, is a drug-dealing friend of Dave, one of the party’s guests. He was invited because the sisters wanted marijuana. His character is known for his intimidating appearance and his massive selection of drugs — which includes birth control and Plan B.

Ferdinand is a 2017 computer-animated film directed by Carlos Saldanha. It loosely follows the 1936 children’s book, The Story of Ferdinand, by Robert Lawson and Munro Leaf. It follows the story of a giant bull that’s taken from his home and is destined to find his way back to his family.

Ferdinand, who is voiced by John Cena, is often mistaken as a big, bad, fighter due to his size. In reality, he’s a kind-hearted bull with a gentle soul. After being taken from his home, he assembles a group of misfits that embark on the ultimate adventure. It’s a beautiful story.

In fact, there was never a question about who would voice Ferdinand. Saldanha said he knew right away that John Cena was the man for the job. Cena’s larger-than-necessary body, but big heart and kind soul fit Ferdinand’s character perfectly. It was perfect for Cena and he nailed it.

Playing With Fire was a 2019 comedy film starring John Cena as Jake Carson, a proud and talented Superintendent of a team of smokejumpers — which consists of Mark Rodgers, Rodrigo Torres, and Axe. Cena was excellent in the film and he displayed his ability as a comedic actor.

Throughout the movie, the team of smokejumpers bond and eventually learn that the children are orphans running away from their foster home. Before calling Child Services, Carson throws a huge birthday party for one of the children and ends up adopting them by the end of the movie.

Daddy’s Home is a 2015 comedy film directed by Sean Anders and starring both Will Ferrell and Mark Wahlberg. It was their second collaboration after their successful movie The Other Guys. It’s a funny movie with a good plot and it’s executed perfectly by both Ferrell and Wahlberg.

The movie follows a story of a stepfather (Ferrell) trying to earn the respect of his wife’s children, but he’s constantly interrupted by the children’s biological father (Wahlberg). The two eventually become friends, but Wahlberg’s character remarries and finds himself in a similar situation.

John Cena’s appearance in Daddy’s Home was just a small cameo, but he made the most out of it and people quickly fell in love with his character and storyline. He left quite the impression and it turned into a much bigger role in the sequel — which we’ll discuss next on this list.

Two years after the release of Daddy’s Home, Sean Anders directed Daddy’s Home 2 and gave John Cena a bigger role — much at the request of viewers and fans. At the start of the movie, Brad and Dusty (Ferrell and Wahlberg) were friends and were co-dads to Dusty’s children.

After learning that one of the children doesn’t like Christmas anymore due to dual arrangement, Brad and Dusty decide to have a joint Christmas. Things quickly go sour when Brad and Dusty’s fathers come into town, leaving their relationship strained at one point in the movie.

In an attempt to get back at Dusty, Brad decides to invite Roger (John Cena) over for the festivities. Much like he had in the first film, Roger intimidates Dusty the same way Dusty intimidated Brad. By the end of the movie, everyone learns to accept and appreciate each other.

Trainwreck is a 2015 comedy film directed by Judd Apatow and starring both Amy Schumer and Bill Hader. While they’re the main characters in the film, the real star of the movie turned out to be John Cena, who was cast as the muscular boyfriend of Amy Schumer’s character.

Trainwreck is the OG among funny John Cena movies. While it’s not the first comedy he did, it’s the first one where he truly wowed the movie industry with his comedic ability. He showcased his ability to improvise and it was later revealed that most of his lines in the film weren’t written.

While Amy Schumer’s character eventually ends up with Bill Hader’s character — a renowned sports doctor — Cena’s presence in the film was enough to warrant it as his second funniest role of all-time. It’s what helped him earn the many opportunities that followed in the comedy niche.

Blockers is a 2018 comedy film directed by Kay Cannon in her directorial debut. John Cena stars alongside Leslie Mann and Ike Barinholtz as three overprotective parents with teenage daughters that are preparing for prom night. Cena is as funny as ever as Mitchell Manners.

The three parents learn of their daughters’ plan to lose their virginity on prom night — something they’re committed to preventing, or blocking. The parents follow their daughters from one party to the next in hopes of cockblocking them, but they run into a myriad of obstacles along the way.

Other John Cena Movies That Are Worth Watching

Although the most popular John Cena movies today are his comedy films, they’re not the only roles he has in his repertoire. Well before he made it as a comedy actor, he was featured in a variety of WWE films, wrestling dramas, and eventually war movies, action films, and more.

YOU MAY ALSO LIKE: 20 of the Cutest WWE Families

Not only that, but John Cena has made appearances on several television shows, including Psych, Extreme Makeover: Home Edition, Saturday Night Live, Hannah Montana, American Grit, and much more. That’s right, his acting goes well beyond the John Cena movies above!