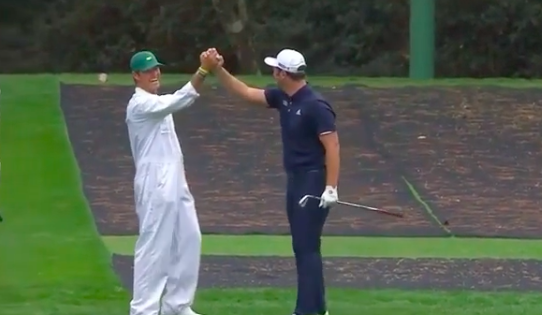 Birthday Hole-In-One! Jon Rahm Hits Shot That Skips Across Water Onto Green And Sinks Into Hole

Birthday Hole-In-One! Jon Rahm Hits Shot That Skips Across Water Onto Green And Sinks Into Hole

What would your ideal birthday present be?

RELATED: Tiger Woods Explains His Decision to Move From California to Florida Was to Get Better

If you are a PGA golfer, I can imagine sinking a hole-in-one would be icing on the cake for a great birthday gift to yourself. And that’s exactly what Jon Rahm did when he sunk a hole-in-one at Augusta National Golf Club during a Master’s Tournament practice run, according to The Guardian.

But wait, there’s more! Not only did Rahm sink that shot that he reposted from The Masters, but he also hit another hole-in-one a different day. “Two hole-in-ones in two days – Happy Birthday to me!” Rahm said in the Instagram post.

Rickie Fowler filmed that first hole-in-one. And Rahm hopes it happens again during the actual Master’s tournament, which starts on Thursday.

“Hole-in-ones are always special, even more so at Augusta National,” Rahm said in the post. “Here’s to hoping it happens again later this week!”