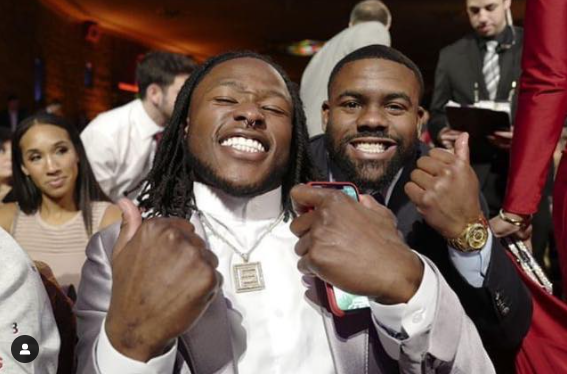 Alvin Kamara was arrested in Las Vegas on Sunday afternoon just hours after the conclusion of the 2022 NFL Pro Bowl. According to the Las Vegas Metropolitan Police Department, Kamara was identified as the suspect in a battery incident on Saturday night that ended in bodily harm.

The incident occurred at a Las Vegas nightclub on the 3500 block of South Las Vegas Boulevard around 6:00 p.m. on Saturday. The victim, Darnell Greene, arrived at a local hospital not long after, where police officers questioned him and later identified Alvin Kamara as the suspect.

According to NFL.com, the victim was entering an elevator with Kamara and several others. Kamara put his hand on the victim’s chest to prevent him from entering the elevator. After resisting, Kamara pushed the victim, caused him to stumble, and then proceeded to attack him.

There were four suspects that took part in the battery before the victim lost consciousness. The victim suffered an orbital fracture in his right eye, an injury that could require surgery. There is video surveillance that confirms the victim’s claims, which lead to Kamara’s arrest on Sunday.

Around 7:00pm PT on Sunday, the LVMPD released a statement that confirmed the news. They added that Kamara was located and taken into custody on Sunday night without incident. Since the investigation is ongoing and no updates have been given since the initial statement.

What we do know is that Kamara is facing a felony for battery resulting in substantial bodily harm. He’s currently being held in Clark County Detention Center on a $5,000 bond and is scheduled for his first court appearance on Monday around 1:30pm local time (Las Vegas).

Kamara made his fifth Pro Bowl appearance on Sunday, a game that kicked off around noon local time. The game ended around 2:30pm local time, less than five hours before Kamara was arrested and taken into custody. Kamara finished the game with four catches and 23 yards.

His first loss of the evening came when the NFC Conference (Kamara’s team) lost a tight 41-35 game against the AFC Conference at the Pro Bowl. It was the fifth time in a row that the AFC won the Pro Bowl. Maxx Crosby (defensive) and Justin Herbert (offensive) were the MVPs.

Kamara’s second loss of the evening came after the Las Vegas Metropolitan Police Department questioned him regarding Saturday’s nightclub battery incident. The questioning occurred inside the Las Vegas Raiders’ home stadium, Allegiant Stadium, where the game was played.

YOU MAY ALSO LIKE: Brain Flores Sues NFL and 3 Teams After Alleged Racial Discrimination

While Kamara has posted bail, we’re still awaiting the outcome of his first court appearance. As we learn more, we’ll keep everyone informed. Either way, it’s clear that Alvin Kamara has some thinking to do as he begins his offseason and looks forward to another productive NFL season.