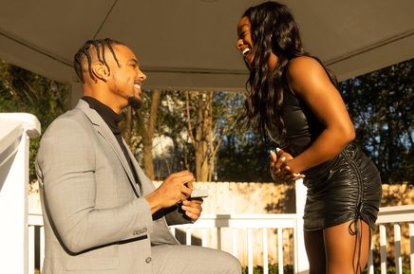 Simone Biles and Jonathan Owens have been dating since August 2020, but will soon tie the knot as the two announced their engagement on Tuesday morning. The Olympic star and NFL safety shared the announcement via Instagram, to which Biles captioned, “THE EASIEST YES”

Biles and Owens first confirmed their relationship in August 2020, but fans started to speculate they were dating weeks prior. Since then, they’ve been warming our hearts with joy as they now embark on their forever journey together. They’re easily one of our favorite athlete couples.

The two are in a very loving and supporting relationship, while still staying dedicated to their crafts. Biles is a 19-time world champion and seven-time Olympic gold medalist in gymnastics, while Jonathan Owens just finished his third season as a safety for the Houston Texans.

In her Instagram post, Simone Biles added, “I can’t wait to spend forever & ever with you, you’re everything I dreamed of and more! let’s get married FIANCÉ.” As for Jonathan Owens’ post on Instagram, it was captioned, “Woke up this morning with a fiancée.” Not a bad way to wake up!

He added a big thank you to several of his friends, who helped him set up and ultimately capture the moment. The two shared photos of Owens proposing on one knee underneath a balcony in Houston, Texas. Owens added in his caption, “she really had no clue what was coming.”

The Many Accolades of Simone Biles and Jonathan Owens

Simone Biles began practicing gymnastics at the age of six and had her first coach by the age of eight. She began her junior career in 2011 and her senior career two years later in 2013. Since then, she has dazzled us with her incredible display of gymnastics talent in multiple events.

At the World Championships, Biles has won a total of 25 medals since 2013 – including 19 gold medals, three silver medals, and three bronze. She also won four Olympic gold medals in 2016 in the vault, floor exercise, team, and all-around events. She has seven total Olympic medals.

As for Jonathan Owens, he began playing football in middle school and started to really impress some people in high school. He then played defensive back for Missouri Western State before signing with the Arizona Cardinals as an undrafted free agent following the 2018 NFL Draft.

Owens didn’t last long on the Cardinals’ roster, but was signed to the Houston Texans’ practice squad shortly after being waived by Arizona. He only played in seven games throughout his first two seasons, failing to record a single stat as he spent a lot of time on the practice squad.

2021 was a different season for the 26-year-old safety. He played in seven games and started two of them for the Texans. He finished the season with 18 tackles, one pass defensed, one interception, and one fumble recovery. He should see even more playing time next season.

YOU MAY ALSO LIKE: Kamila Valieva Cleared for Women’s Short Program on Tuesday

For now, we congratulate Simone Biles and Jonathan Owens on their engagement. The two have a way of lighting up the room and will continue to do so as one of the world’s favorite couples. We can’t wait to see this couple grow and hopefully they start a family next!