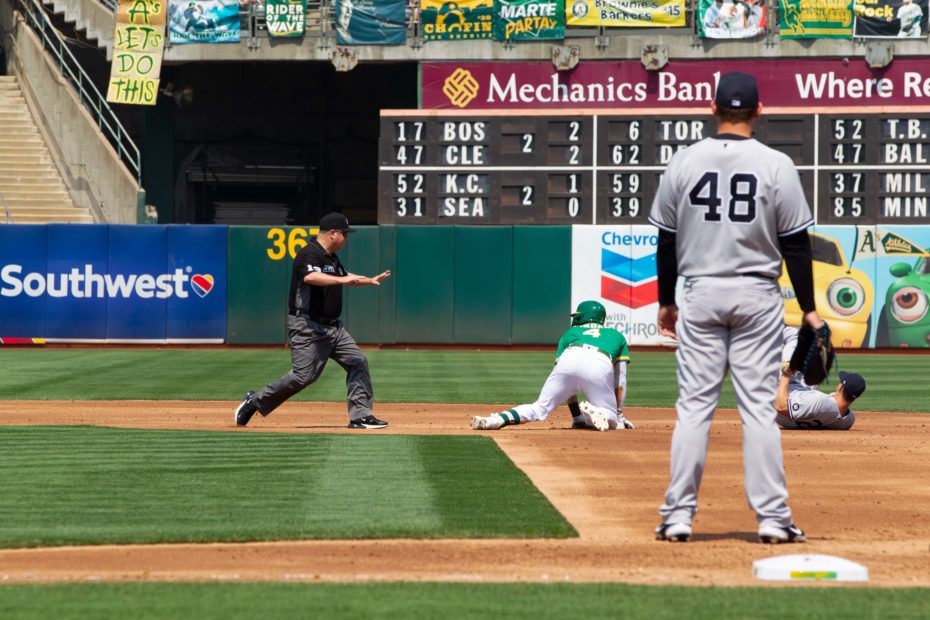 25 of the Worst Calls in Baseball History

Lord knows there have been many bad calls made in the MLB, but we have devised a list of some of the most notorious. Below are some of the worst calls in baseball history, with several umpires, unfortunately, landing themselves on this list more than once.

Don Denkinger called Jorge Orta, a member of the Kansas City Royals, safe in the 9th inning at the Kauffman Stadium. The problem is, Jorge Orta was very clearly out, which was evident to the entirety of the players and audience. This call alone resulted in a Royals win, 4-3.

This game had a record number of strikeouts for Livan Hernandez, with 15. However, many of these strike outs were not valid, and were the consequence of a poor pitch. Fred McGriff should have walked that day, but instead struck out. This resulted in a Marlins win against the Braves at Pro Player Stadium, and a painful loss for the Atlanta Braves.

At Yankee Stadium in 1983, Tim McClelland made an infamous decision, which became known as the “pine tar incident“. Geroge Brett had hit two home runs, and was leading the Royals to victory against the Yankees with a score of 5-4. With the Royals in the lead, Yankees Manager Billy Martin said that Brett should be removed because he applied too much pine tar to his bat. McClelland agreed with the Yankees manager. Though the Royals had this decision overturned and eventually won, this is still known as one of the worst calls in baseball history, causing much grief and time wasted for both teams.

At Braves Field in 1948, Bill Stewart made a bad call, confirming that Phil Masi was safe, despite photographers being able to provide evidence that Indians player Bob Feller had indeed tagged Masi. Cleveland lost to Boston by 1, and Bill Stewart is solely to blame.

Jim Joyce, a respected veteran umpire within the MLB, made a bad call that cost Armando Galarrage a perfect game. The Tigers manager was very vocal about this call, and this incident went down in history for the short list of mistakes made by Jim Joyce over the course of his long career. The Tigers won against Cleveland, 3-0.

In 1969 at Shea Stadium in New York, the Orioles and Mets were tied, when Shag Crawford (in agreement with Lou Dimuro) allowed an invalid play by the Mets to stand. Many blame Shag Crawford for this loss, since this call did not abide by the small print in the official rule book.

At Fenway Park in 1999, Tim Tschida, an umpire in the MLB, missed a call and has since acknowledged his mistake. Had this call not been made, the Red Sox could have possibly turned the game around. Tim Tschida has, unfortunately, not lived this one down. The New York Yankees beat the Boston Red Sox, 9-2.

Jerry Meals ruled that Pirates catcher Michael McKenry did not tag Julio Lugo of the Atlanta Braves in the bottom of the 19. Though replays have proven this decision false, Lugo was still able to score the winning run. The Braves won 4-3. Jerry Meals has since spoken on this occurrence with regret.

During an NCLS game between the Dodgers and Phillies in 1977, Bryce Froemming called Lopes safe when it was clear to the crowd that he was not. The Dodgers won 6-5.

In May of 2013, Angel Hernandez made the call that Adam Rosales’ game winning home run hit “hadn’t cleared the 19 foot wall by a few feet” even thought footage suggested otherwise. Oakland lost to Cleveland by won point, 3-4.

At Yankee Stadium, Bill Summer ruled that Jackie Robinson was out when he hit home plate. However, Yogi Berra has always vowed that he was safe. Much to the chagrin of numerous fans, Jackie Robinson and his Brooklyn Dodger lost to the Yankees, 5-6.

At Angel Stadium, Tim McClelland made yet another bad call that ruled in favor of the New York. Nick Swisher was declared safe, when he was clearly was not. He made several other incorrect declarations that evening, which ultimately let to the humiliation and frustration of the LA Angels, with a loss of 1-10.

At Tiger Stadium in Detroit, Stan Landes made a critical mistake when he ruled Lou Brock (of the St. Louis Cardinals) out as he passed base. This was a game changing call that affected many other plays at stake, and it ultimately led to a score of 3-5 in favor of Detroit.

Bill Miller’s infamous strike zone call at Minute Maid Park ruled favorably to the Astros, but left many Dodgers confused. A dozen of their batters struck out, with the majority of them not attempting a single swing. This was due to poor pitching by the Astros, which ultimately led to batters having to move out of the way. Fans were left disappointed, with a score of 13-12, Astros.

At Riverfront Stadium in Cincinnati during the first game of the World Series, Ken Burkhart made a career-defining call when he mistook which hang the ball was in when Baltimore tagged a Reds player. This led to a score of 4-3 in favor of the Baltimore Orioles. Much carelessness occurred during this match, leading the incident to stand the tests of times, still being remembered over 50 years later.

10 More of the Worst Calls in Baseball

At Yankee Stadium, the score was tight during ALDS Game 2 in 2009, with a tied of 3-3 between the Minnesota Twins and New York Yankees. It was the 11th inning, when umpire Phill Cuzzi called a foul ball when it was clearly a pitch error on behalf of Joe Mauer. This affected the outcome of the game dramatically and ended with the New York Yankees leading 4-3.

At Turner Field in Atlanta, Sam Holbrook decided that batter Andrelton Simmons of Atlanta was out, when in fact he was not. Though the Braves lost by a whole three points, many feel that this bad call set the tone for this loss on part of the Atlanta Braves.

At Riverfront Stadium in Ohio, the game between the Red Sox and Reds at the World Series was tied 5-5…that is, until umpire Larry Barnett failed to make pivotal calls that ultimately resulted in a win for the Cincinatti Red by one point (6-5).

Richie Garcia was the umpire for a game between the Yankees and Orioles. The Yankees were losing by a point in the bottom of the 8th, when Richie Garcia failed to call fan interference during a pivotal moment in the game. The fan reached down and grabbed a ball that should have still been in game. Derek Geter and the Yankees came out on top with a 5-4 win.

At Hubert H. Humphrey Metrodome in Minnesota, the Braves were up against the Twins in the second game of the World Series. Unfortunately, Drew Coble made a call that cost the Braves the World Series. Kent Hrbek of the Twins pushed Ron Grant of the Braves off of the base, but Coble called it a tag and declared Grant out. Fans, players, coaches, and announcers alike noticed this fatal mistake (especially the Braves), and Drew Coble still hasn’t heard the end of it from his colleagues.

During the regular season at Coors Field the San Diego Padres and Colorado Rockies were tied for the wild card spot, when McClelland called Holliday safe at base. Some debate whether or not he ever even touched the base. This is the third time umpire Tim McClelland was named in this list of the most infamous bad calls in history.

Frank Puli was umping the fourth game of the World Series in 1978 when the Giants and Dodgers were battling it out. Frank Puli made a call that the Dodgers manager and many in the audience disagreed with, saying that Lou Piniella should have been ruled out during a bad play. Despite backlash from Tommy Lasorda (the Dodgers manager) and many onlookers, Pulli held firm on his ruling.

During the regular season game between the Dodgers and Giants in 2021, an critical and misinformed call was made by Angel Hernandez, who is often the center of ridicule and has already made one appearance on this list. He punched out Buster Posey (Giants) regarding a breaking ball that missed the corner by [apparently] more than four inches.

In the 4th inning of game 3 of the 2013 World Series, Ron Kulpa was the umpire for the match between the Texas Rangers and the St. Louis Cardinals. The Cardinals ended up winning 16-7, and many blame Kulpa for calling Holliday safe, even though he was tagged a step before he reached base. Onlookers and announcers believe that this set a negative tone, leading to the downward spiral of the Rangers during this disappointing match.

Sometimes you get ’em right, but these times they got them so so wrong!