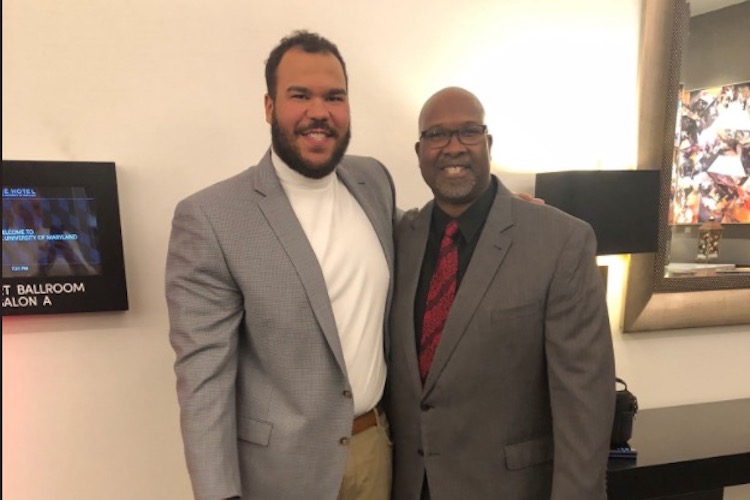 An offensive lineman on the University of Maryland’s football team tells his personal story about his father’s battle and ultimate recovery from novel coronavirus in a powerful letter. Ellis McKennie III will graduate with his master’s degree soon, but before celebrating that achievement, he witnessed his father’s terrifying battle with COVID-19.

The 22-year-old was looking forward to Spring as he was set to play in Maryland’s Pro Day, an event that sees dozens of NFL scouts looking for top talent. In addition, he was also eager to attend his graduation ceremony and celebrating his recent acceptance into the University of Washington’s Law School.

In mid-March, the health crisis ended sports seasons and everything from movie theaters to university campuses shuttered.

“As a selfish 22-year-old, all I could see were my NFL dreams falling through the cracks. The last few weeks of what has been the best five years of my life were gone in the blink of an eye,” McKennie wrote. “No Pro Day. No graduation. No Senior Spring. That was all I could think about on March 15.”

Then on March 21, Ellis McKennie Sr., the athlete’s father, tested positive for COVID-19 and he was eventually put into a medically induced coma for a total of 15 days.

McKennie’s father was hospitalized for nearly a month as he battled coronavirus.

The elder McKennie was in the hospital alone as his family was unable to visit him for weeks due to hospital restrictions.

“Growing up, I saw my father as the greatest superhero there ever was,” McKennie wrote. “The smartest, cleverest, most athletic, most confident man on the planet. I always tried to emulate his level of intellect and charisma. The last thing I could imagine is seeing him hooked up to a ventilator, his lifeless eyes fluttering as we just try to let him hear our voices.”

McKennie’s mother and sister quarantined at home in McSherrystown, Pennsylvania while McKennie Sr. recovered in the hospital, People reports. The athlete stayed with his aunt and visited the hospital parking lot daily to be closer to his father.

On a ventilator, McKennie Sr.’s health deteriorated by the day.

On a ventilator and with little sign of hope, the family began to believe that its patriarch was “truly on his last leg.”

“I couldn’t avoid a feeling of utter helplessness,” he wrote. “At night, the news would come on and report a growing number of deaths in America from this virus. It appeared it would only be a matter of time until my dad was one of those numbers, and there was nothing I could do about it.”

The awful situation meant McKennie couldn’t celebrate a letter he received from the Baltimore Ravens that said the team was interested in drafting him. Instead, the football player went undrafted and chose to attend law school in the fall.

Then on March 28, things took a surprising a positive turn for McKennie Sr.

Fortunately for the family, McKennie Sr. awoke from the coma and was able to finally speak with his family. On April 13, he was discharged from the hospital and the athlete captured the moment in a touching video.

“Reality strikes when you see your superhero in a fight for his life,” McKennie wrote. “But your previous thoughts are reaffirmed when you see him win what seemed to be an unwinnable battle.”

McKennie Sr. is no longer experiencing coronavirus symptoms and celebrated his 52nd birthday on April 19 with a Zoom party.

“To those who are suffering from this disease the way my father and my family have, I want this story to inspire a feeling of hope,” McKennie wrote. “This disease is a formidable opponent. Many strong and wonderful individuals have lost the fight with COVID-19. But it is possible to win.”